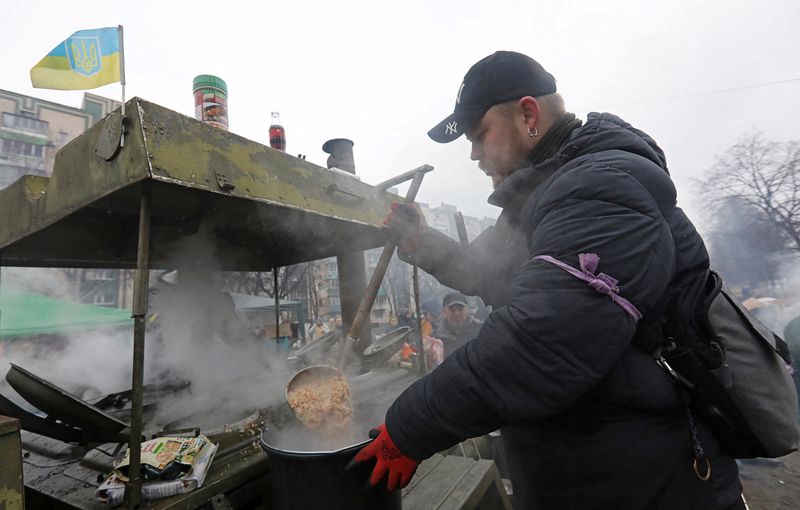 LONDON (Reuters) – The World Food Programme said on Friday it is ramping up food aid to war-torn Ukraine, citing reports of severe shortages of food and water in Kyiv, the capital, and the northeastern city of Kharkiv.

The U.N. agency said it is in the process of finding partners in Ukraine to help it distribute the food, and that it will also assist Ukrainian refugees coming across the border to neighbouring countries.

Ukraine closed its ports last Thursday after Russian forces invaded in the biggest assault on a European state since World War Two. The closure means an inability to import goods, exacerbating food shortages caused by the general mayhem of war.

“In a year when the world is already facing an unprecedented level of hunger, it’s just tragic to see hunger raising its head in what has long been the breadbasket of Europe,” WFP Executive Director David Beasley said during a visit to the agency’s operations hub on the Polish-Ukrainian border.

The two countries account for 29% of global wheat exports and 19% of global corn exports. Ukraine is however unable to export due to the port closures, while Russia’s exports have been hamstrung by unprecedented Western financial sanctions.

The WFP itself buys more than half its wheat from Ukraine, and there are fears disruption to the country’s upcoming harvest will drive global food prices further and add to already worsening global hunger levels.

“The crisis in Ukraine could have a serious impact on vulnerable people around the world. (It) speaks to the urgent need not only to fund vital humanitarian aid programmes, but to invest in peace,” U.N Secretary-General Antonio Guterres said earlier this week during a funding appeal for Ukraine.