What is lawnmower parenting? Lawnmower parents are the talk of the parenting sphere — and not, so it seems, for a good reason.

An essay published on Weareteachers.com late last month calls the parenting style a “troubling trend.” And, penned by an anonymous writer, the post has since gone viral on Facebook.

These parents essentially do whatever they can to mow down challenges for their kids.

Instead of preparing children for the challenges they may face, lawnmower parents “go to whatever lengths necessary to prevent their child from having to face adversity, struggle, or failure,” states the We Are Teachers essay entitled “Lawnmower Parents Are the New Helicopter Parents & We Are Not Here for It.”

It cites a blog post from Duquesne University professor Karen Fancher, who wrote about this phenomenon back in 2016.

Helicopter parents are known as people who hover — a lot. They swoop in to “rescue” their kids in crisis situations. But, lawnmower parents take charge when hovering “may be limited,” she wrote. Often times, they intervene before a problem even occurs.

Fancher gives an example of lawnmower parents in action: An incoming student and her mom enter Fancher’s office to ask for a schedule change.

“The parent walks into my office, with the girl trailing sheepishly behind,” she recalled. “The mother says, ‘My daughter will be starting here in the fall. We’ve got a problem with her class schedule.'”

“Do you see the problem here?” Fancher challenged her readers. “The child has been accepted into a major university and is weeks away from starting a difficult area of study, but it’s her parent who is doing all of the talking to get her problem corrected, while she says nothing and appears to be dragged along against her will.”

Other variations of lawnmower parents include “snowplow parents” and “bulldozer parents.”

Being involved is a good thing — it’s natural. The main concern, Fancher argues, is that these children will grow up with low drive to handle problems on their own.

Stephanie Samar, a clinical psychologist at the Mood Disorders Center of the Child Mind Institute, told ABC News, “If you say, ‘Oh, I took care of this for you,’ it inadvertently gives that message of ‘you can’t do this yourself, you can’t succeed.'”

This, Samar explained, can lead to “increased anxiety, low distressed tolerance — [a] discomfort that comes with having conflict helplessness about [t]heir situation.” They won’t know how to deal with failure moving forward.

If a child of lawnmower parents fails their first college test, they’re less likely to study harder next time, suggested the We Are Teachers writer. Instead, they’ll blame the professor, ask their parents to get involved or even have a breakdown. 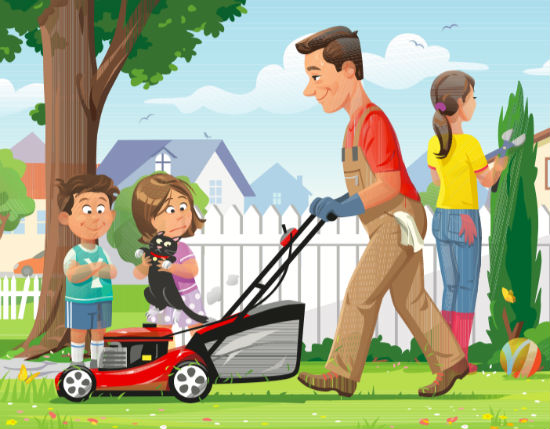 “I know many people who have done this for their kids, all with good intentions, and in most cases the children have grown up to be adults who seem lazy or disinterested in taking any initiative in their lives,” one Metro staffer and mom-to-be says. “They have the attitude, ‘Someone else will handle this problem for me. No need to step up and care.'”

As new parents, she and her husband are going to “make an effort not to mow down challenges for our kid. … [I]t’ll be hard, yes, and will go against our instincts to nurture. But I want our child to grow up feeling empowered, confident and eager to tackle life’s challenges.”

My own parents agree with that mindset.

“There’s a difference between being protective and mowing down problems,” my dad, a licensed clinical social worker, tells me.

My mom, a senior VP at a well-established bank (who’s a parent in her own right at work, dealing with HR crises and employee training), says being lawnmower parents would have “lessened” my — and my sister’s — ability to “cope with issues.”

As one Facebook user commented on the We Are Teachers essay, “Our job is to prepare the child for the road, not the road for the child.”