Not many people would spend a freezing night digging through the trash bags lining New York City’s sidewalks, especially if they didn’t have to. Yet that’s the bombshell dropped by Janet, one of the leaders in the city’s freegan community who salvage still-edible food that has been thrown out with the trash by businesses.

“I totally choose to do this,” she says. “I can buy anything I want. But that does not mean I should choose to spend it on wasteful, destructive products.” 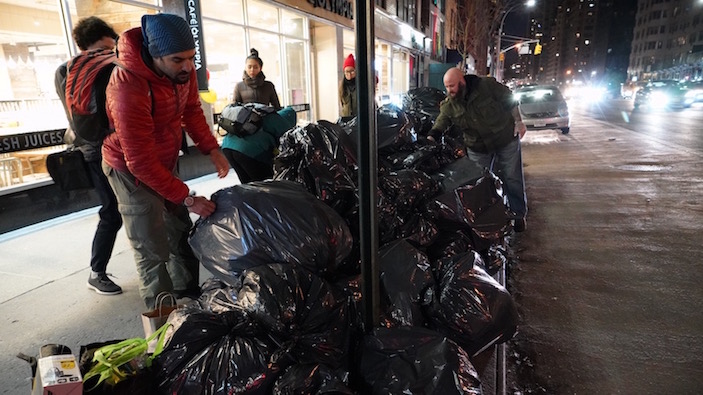 Metro accompanied her and five other freegans on one of their twice-monthly freegan tours, which will be featured on the new series Food Exposed premiering March 27 on Fusion. The eight-part documentary will explore food-related issues like overfishing, dairy farming and GMOs, but it all begins with a look at the colossal scale of food waste happening every day. In the U.S., 40 percent of edible food is wasted while nearly 50 million Americans live in poverty.

“By the end of the night, I’ll feel so uuuugh,” says Food Exposed host Nelufar Hedayat, mimicking something between a headache and nausea. “When you touch the bread and it’s still warm — it’s just too much.” 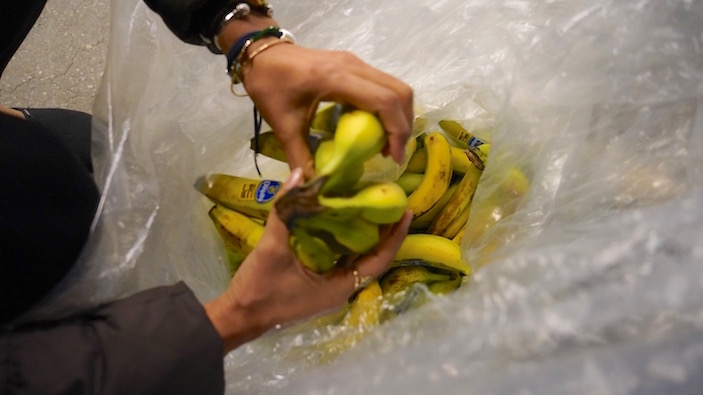 Most households don’t throw away food unless it’s beginning to liquefy at the bottom of the crisper — or, at least, that’s how it goes in my apartment. But the rules are different for businesses. The item could simply be past its optimal freshness, approaching but not yet past its sell-by date or simply considered too ugly to sell, as is the fate of many fruits and vegetables.

So what’s in the trash bags that line Manhattan’s Second Avenue sidewalks — the lack of alleyways makes the city’s refuse more accessible than most — is often not garbage.

Our first stop is a drug store chain whose unsold ready-made sandwiches and salads can reliably be found on the sidewalk, just feet from the refrigerated cases where they sat just hours, or even moments before. Tonight though, the group came up empty. At 9:55 p.m., they agree it was probably too early. 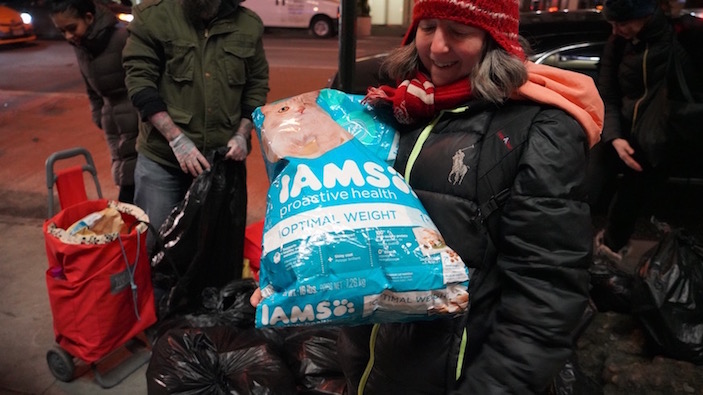 Next is a pet store that can be found all over the country, where the group makes its biggest find of the night: large bags of brand-name dog and cat food, including a $47 bag of organic, non-GMO Blue Buffalo. None of them are expired — the closest was 12 days out, and especially for dry goods expiration dates don’t mean they become inedible. “Donating it would be a tax write-off,” Janet also points out. At least her two cats will eat well tonight.

The third stop, a small grocery chain, is the first glimpse of true food waste. Rotisserie chickens that are still warm; unripe bananas that have been bruised, paradoxically left in a limbo where they’re both before their peak and past it; bell peppers more gorgeous than what can be found on market shelves in Brooklyn. “So much food,” a woman dressed for a night out laments as she walks past.

A large independent cafe has a lot of trash, but only its bagels — soft and plump, in every variety — are salvageable. Next door, a small health food store has discarded individual bags of plantain chips that retail for $3 each, days from expiration. The bags have been slashed open slightly, a common practice to prevent reselling. Some in the group are deterred, but not all. The jackpot is wrapped packages of lavender essence, just past their sell-by date; there’s enough for everyone to take one. 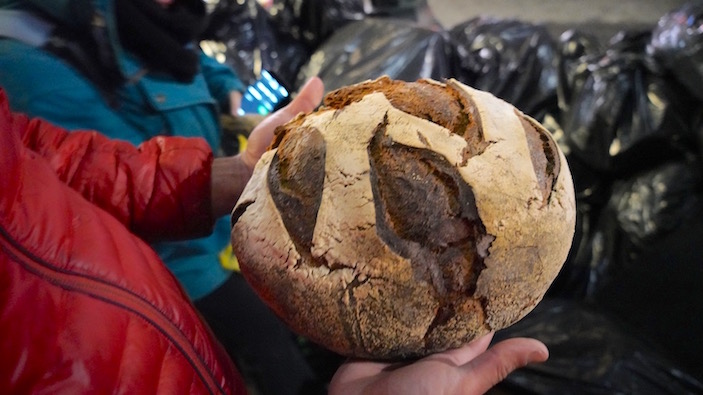 On the curb of an international bakery chain that accepts “donation requests” from the communities it serves is a giant black trash bag. Most bakeries put their leftover breads and pastries in clear bags, an invitation to passers-by. But once opened, a bounty of grain loaves and giant sourdough rounds were revealed. Instead of outsourcing the responsibility, why not be proactive by giving this bread directly to hunger relief groups within their communities?

The night’s final stop is an Amish grocery store, with rice crackers for babies, perfect ears of corn and bottled sauces. We also encounter the first employee who might object, but before he can even say anything, Janet calls out “no mess,” and he heads back inside. It’s her go-to line for heading off conflict, she says (the police don’t bother her). “That’s what most of them are worried about, and then getting a $100 fine for littering.

“I think most of the employees feel bad. Look, they put these bagels in a bag by themselves, not in with other trash.” 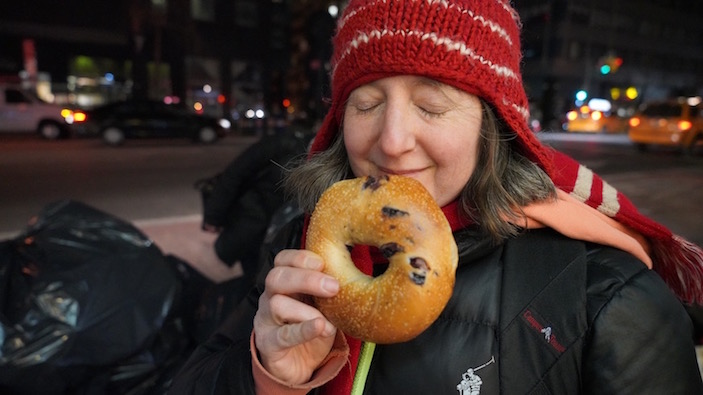 All told, Janet describes it as a typical outing. “What we found tonight was not special. It was not a big night. It was a typical night of an abundance of good — nutritious and sometimes not nutritious, but still good quality food — that was only thrown out because inherent in our system is this waste that is intentional.

“All over the country, the giant food chains and even smaller high-end stores are throwing out in this disgustingly wasteful way because they can, and they continue to make profits because they’re charging too much. They could sell this food at a discount because it’s about to expire, but they don’t see that as serving their best interest.

“In less than 10 blocks, we found an abundance that leaves us all with not enough hands and power to carry any more,” she says. “This is often how we end our tours, because we can’t carry more not because it’s over.” 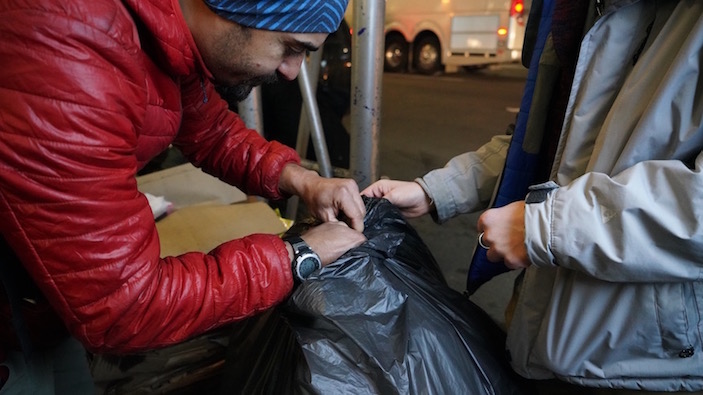 For an activity that carries so much shame and stigma, being a freegan is not a quiet business, with constant shouts of “Anyone need lemons?” “There’s baby food here!” “Who has a cat?”

Sharing is one of the many rules that govern being a responsible freegan. That’s responsibility to each other, as well as the businesses whose trash they’re salvaging.

Janet guides the group with the firm but kind voice that comes from being a career educator. Petite but commanding, she starts the night with a no-shame orientation — “You shouldn’t feel embarrassed for taking something or for not taking something” — and leads the group to each location.

There are rules to every part of dumpster diving. Members must untie, not rip, the bags, and announce what’s inside even if it may not look appealing to them, then tie them back up. Wearing gloves is advisable. Don’t block the sidewalk, and don’t eat anything until you get home, where you can see it under proper light.

Freegans vary on what’s acceptable to eat, though nothing salvaged on our tour looked questionable. In fact, by the end, every non-freegan who’d come along to observe ended up taking at least one item home. “People think you’re dirty,” Janet says. “The reality is not that way.” 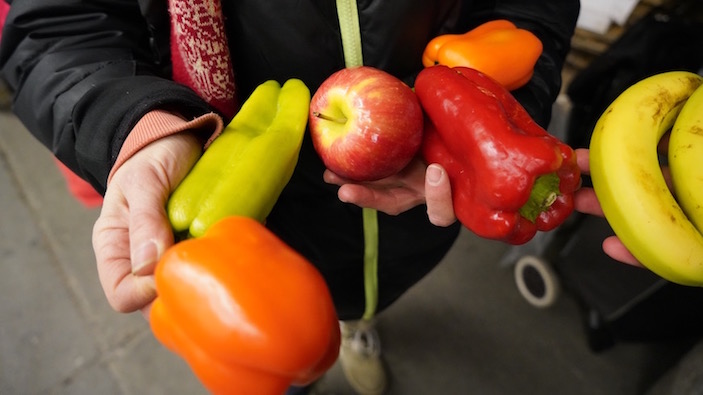 Her teacher’s pension — as well as not having had children and being frugal all her life — gives Janet the ultimate freedom: to live as she chooses.

Being a freegan has given her a certain spiritual wealth, too. It’s not just about saving good food, either. During the winter, Janet also rescues the gloves, hats and scarves lost on the city’s streets and launders them, to be given out to anyone in need. If no one wants food that’s packed in a box, she’ll put the box in with the recycling.

Noticing the casual waste all around you makes the freegan life feel like any other act you’d do to help the world. Janet says people often find her group’s website, freegan.info, while reading about environmental issues. There’s also a Meetup group for freegans, and anyone who’s interested — whether or not they intend to take something home — can come on their group tours.

Some people live this way out of necessity. But there are many like Janet, who do it because of a philosophy that rejects what she sees as simple corporate greed.

“We’re hoping that people can stop being slaves to the corporations that insist you need to have the latest new thing,” Janet says. “I feel comfortable wearing used things. The money is what makes me uncomfortable, actually.”