When is Trump meeting with Kim Jong Un? - Metro US
News

When is Trump meeting with Kim Jong Un? The historic meeting between President Donald Trump and North Korea leader Kim Jong Un is set — and it won’t be in the United States, North Korea or even the Demilitarized Zone that separates North Korea from South Korea.

“The highly anticipated meeting between Kim Jong Un and myself will take place in Singapore on June 12th,” Trump tweeted on May 10. “We will both try to make it a very special moment for World Peace!”

The highly anticipated meeting between Kim Jong Un and myself will take place in Singapore on June 12th. We will both try to make it a very special moment for World Peace!

The June 12 meeting will be the first time that a sitting U.S. president and a North Korean leader will meet — and the announcement comes just hours after three Americans returned home after being held in North Korea. 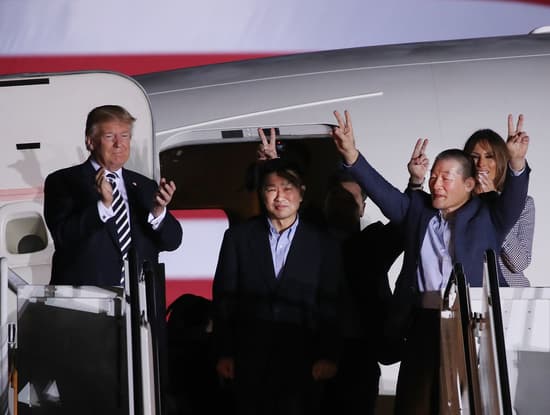 “I think you probably broke the all-time in history television rating for 3 o’clock in the morning,” Trump told reporters at Joint Base Andrews after the prisoners emerged from their plane.

Trump later said it was “nice” of Kim Jong Un to release the prisoners and pointed to it being a sign that relations between the two countries are improving. It’s a stark contrast to the hard-line stance Trump took against “Little Rocket Man” Un.

“We are starting off on a new footing — I really think we have a very good chance of doing something very meaningful. A lot of very good things have happened,” Trump said. “I really think he wants to do something and bring the country into the real world.”

Trump also mentioned Otto Warmbier during his speech at Jones Base Andrews. Warmbier was held captive by North Korea until he was returned home in 2017 with torture-induced brain damage that the country blamed on botulism. He later died.

“It’s a very important thing to all of us to be able to get these three great people out. I must tell you, I want to pay my warmest respects to the parents of Otto Warmbier, who is a great young man who really suffered,” Trump said.