Who is going to the ‘Top Chef’ finale? - Metro US
Celebrities

Who is going to the ‘Top Chef’ finale? Last night was the penultimate episode before the Top Chef finale and, of course, tensions were high amongst the remaining chefs. Well, not really. Everyone seemed to be getting along pretty well.

Considering that “Top Chef” is not only one of Bravo’s longest running titles but also the network’s most mild-mannered shows, the race to the Top Chef finale is never really one paved in blood from back-stabbings or double-crosses. That tradition rang true in this episode as the remaining chefs, Adrienne Cheatham, Joe Sasto III, and Joe Flamm all geared up for this week’s challenges. Everyone was just to chill and amicable with one another.

In this episode’s “Quickfire Challenge”, the chefs had to catch their own trout out of a fresh pond to serve to the judges. Adrienne struggled the most to catch her fish and lost the challenge because she did not cook it for long enough to kill all of the bacteria from the bear poop in the nearby forest. What a rookie mistake!

Adrienne may have lost out on winning a cool prize, but it didn’t mean that lost out on going to the finale. That was all decided in the episode’s “Elimination Challenge”.

Who is going to the Top Chef Finale?

Like most seasons, the episode before the “Top Chef” finale reunites the contestants to with their families to cook them a family inspired dish. This time, however, the chefs were told that they could only cook vegetarian dishes with ingredients chosen by one family member.

After Padma called his name first as a fake-out, Joe Flamm was announced as the winner of the challenge. The judges loved his Zucchini with Zucchini Pesto (Zu-Pesto?) and awarded him passage to the finale. They weren’t crazy about Adrienne’s pudding rolls but thought they were cool enough to keep her alive.

That meant that our favorite Bay-Area hipster chef Boyardee, Joe Sasto III, did not make it to the “Top Chef” finale. His beet soup and burnt toast just did not come together in the judge’s eyes. It’s okay man, that mustache still rules.

Now it’s down to big Joe Flamm and Adrienne for this year’s “Top Chef” finale! Check back next week as we recap the show’s thrilling conclusion. 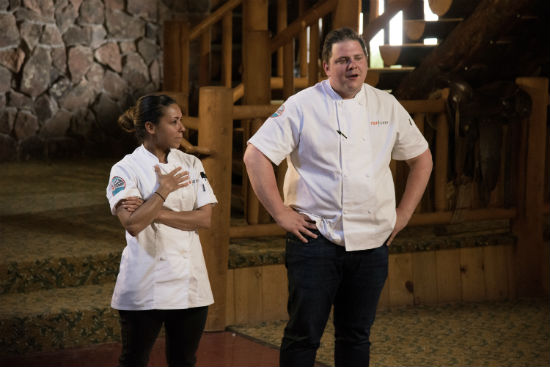