Will there be a Zombieland 3? Its writer and director talk us through their plans for the franchise – Metro US
Entertainment

Will there be a Zombieland 3? Its writer and director talk us through their plans for the franchise In the ten years that it has taken for Zombieland: Double Tap to finally follow Zombieland there have been repeated rumors about the franchise and its future.

Writers Paul Wernick and Rhett Reese have long insisted that they have many more stories to tell in this universe, while a pilot for a Zombieland television series was even shot, but Amazon decided against making a series of it.

But now that Double Tap has been released, what is the future for the franchise? Will there be a Zombieland 3?

Emma Stone hopes so. But only in ten years. That’s according to director Ruben Fleischer, who recently told Metro, “Emma pitched the idea of doing one every ten years. I thought that was a pretty cool idea.”

Of course, Fleischer recognizes that Double Tap has to make enough money at the box office to warrant a follow-up, adding, “Hypothetically we would all be thrilled. But, as was the case with this one, it depends on figuring out a story worth telling and having a script that we all feel can be good. It would also depend on how this movie is received and if there is even a desire for another film.”

Double Tap certainly laid the groundwork for further Zombieland films and stories, though, as the zombies in the franchise have now evolved. ”It all depends on where they were in the country when the outbreak occurred,” explained Reese. “The conditions they’ve been living in, what they’ve been eating. They’re either dumber, smarter, tougher, faster, or slower.”

As you’d expect both Reese and Wernick are very interested in making Zombieland 3. “We’d love to explore this world in anyway we can. Hopefully that will mean a Zombieland 3. Obviously this one needs to be a success,” remarked Wernick, before Reese then jokingly interjected by interrupting, “Broadway musical! Broadway musical!”

This then provoked Wernick to add, “We have actually talked about that. This project has lived in many forms in the many years it has existed. My guess is it will continue to evolve. It is even a video game now. too.”

Downton Abbey’s transition from television series to film proves that franchises can cross mediums and still have incredible success, with Reese admitting, “There are a lot of blurred lines now. The medium is no longer the message. You can crossover left to right, front to back. Things become musicals. There are musical episodes. It is odd. Movies become plays. Plays become movies.” 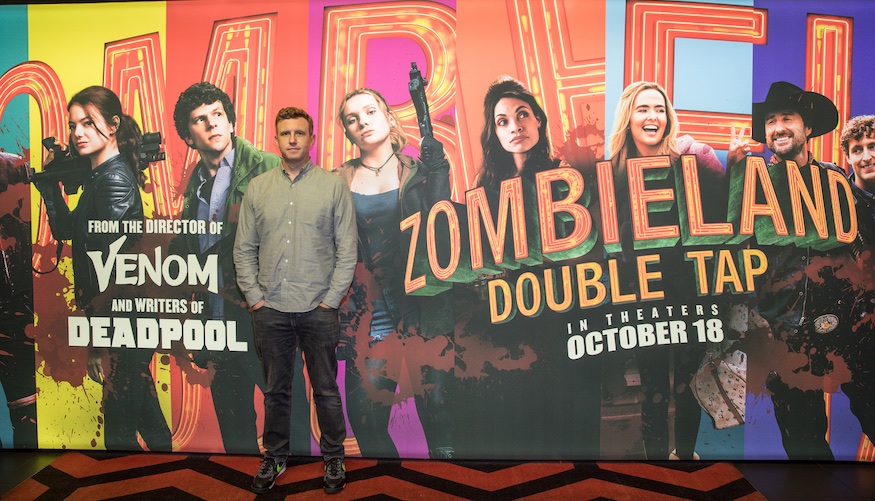 “It is cool. But it is also a function of big companies wanting to stick to brands that are already popular and that people like. There is risk aversion there. It is an interesting time.”

Fleischer would be “thrilled” to see a Zombieland television series, as “it would be fun to explore other parts of the world. It would be really neat to see what is going on in Europe, South America, and other places. I would be excited to see more areas of the world for sure.”

Before then, though, Reese and Wernick are hard at work on Clue, their adaptation of the 1985 black comedy mystery, which is based on the board game of the same name.

“Jason Bateman just came on board as director and will star with Ryan Reynolds,” revealed Wernick when quizzed about Clue. He then added the update of, “We are taking another pass at the draft, with notes from Jason and Ryan. We want to shoot in the spring. It is going to be a murder mystery comedy in the truest sense.”