The films made by visionary director Ari Aster create worlds that you feel like you should leave as soon as possible but seem compelled to stay in. His first release, “Hereditary,” dealt with how one family navigates grief and trauma and how it can cause irreparable rifts after a death in the family. Well, that is a watered-down way of explaining it. The horror film twisted like a knotted tree and provided some of the most unexpected supernatural scares, and burrowed deep into your core with supreme attention to detail that required multiple viewings to fully comprehend. His newest film, “Midsommar,” which opens in theaters today, is a continuation of his unique way of approaching anguish and loss and is the filmmaker’s best work to date and destined to become a masterpiece of the horror genre.

The film stars actress Florence Pugh as Dani, who is in a toxic and codependent relationship with fellow graduate student Christian, played by Jack Reynor. The couple could have gone their separate ways long ago — until Dani is struck with a terrible loss in her family. This just perpetuates things, and Christian, although begrudgingly, chooses to stick with her and offer his support through the trying time. Christian and a couple of his fellow friends from school, Josh (William Jackson Harper) and Mark (Will Poulter), take up the offer of their Swedish exchange-student friend Pele (Vilhelm Blomgren) to visit the tightly-knit commune that he grew up in, the Harga, for their annual midsummer festival over summer break. 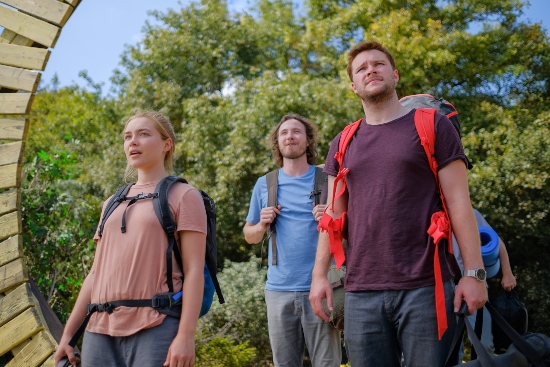 To the chagrin of the group, Dani decides to tag along. Once they arrive, the group is taken inside the world of the Harga and their paganistic religion and way of living. They are given numerous ancient hallucinogens to become more open to the experience, with the community’s charming Nordic outfits and seemingly funny and harmless customs. It’s from there that things take a turn for the worse, and the group realizes that the Harga’s practices are more dangerous than they would have expected and that they can either assimilate and chalk it up to cultural differences, or leave before their lives are at risk.

Aster viewed making the film as a meditation on codependency, and how we lose a sense of our identity after a traumatic loss or a terrible breakup.

“I’m fascinated by family structures and surrogate families and certain codependent relationships that people find themselves in and that they seek out,” Aster explains. “I’m certainly not exempt from that. I do see this film as a film about codependency. Even our main character [Dani] being in one codependent relationship and then she finds herself in, arguably, a more functional one. It’s arguable whether or not it’s healthier than the first one. It’s also kind of about avoiding looking head-on at something that has died because it is too painful to see that it’s dead. I think one reason that it is so painful to see that a relationship has ended is because we are all afraid of dying alone and being alone and facing these existential questions that don’t necessarily have an answer. There’s this low hum that we spend our lives walking out or covering over and will do anything to avoid being alone long enough to have to confront these things.”

Aster created the religion, language and terrifying practices of the community after months of immersive research on Swedish tradition, folklore and mythology. Through that work, the Harga feels like an existing historic culture and some of their horrific traditions seem like irredeemable actions other religions would have made excuses for in the past.

“It was very important to me that this would be a place that felt lived in and felt like it had a  very rich history and deep traditions,” says Aster. “But at the same time, I wanted this place to also kind of function as a fulfillment of all of Dani’s needs, which are being denied throughout the film. In a big way, I really see this community as almost being a manifestation of Dani’s will. In that sense, the film is really a fairy tale even more than a horror film about indoctrination. Because there is an indoctrination that happens, but it’s all kind of contributing to this wish-fulfillment fantasy that is playing out.”

Aster has described this film as a breakup movie inside a horror film. And as Dani and Christian’s relationship starts falling apart amidst the chaos around them, they are both left with grappling with their identity and personal fulfillment. But since this is a horror film at its core, without any spoilers, let’s just say that things do not end peacefully.

“It was important to me that people would relate to both sides of this,” Aster says of the film’s two stars. “We’re aligned with Dani so for all intents and purposes, Christian is the antagonist. I know I’ve certainly been on both sides of that dynamic.”