This weekend is the start of Oktoberfest, and you’ve got your choice of the best Oktoberfest parties in NYC. But there are plenty more things to do in NYC this weekend, including a day of girl power with Bustle, getting a historical tattoo, and eating the city’s best street food on Governors Island.

12 amazing things to do in NYC this weekend 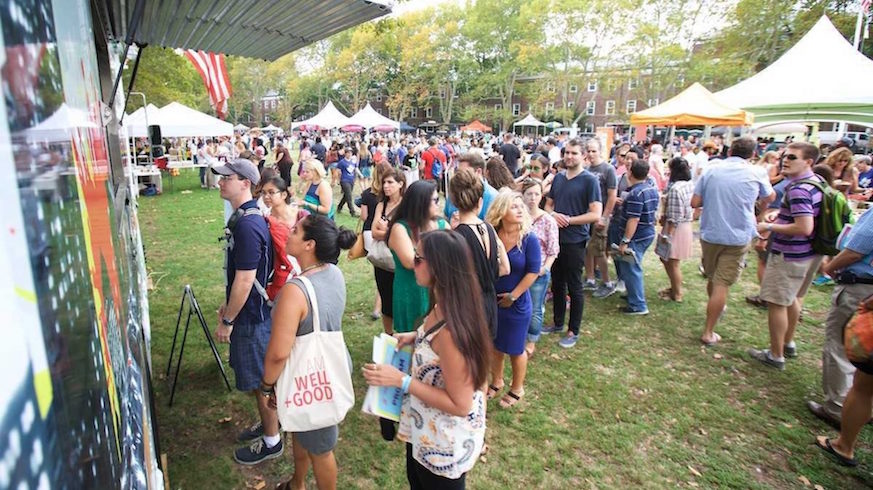 Hit up the Vendy Awards on Governors Island this weekend.

For four days, the Brooklyn Americana Music Festival brings over 50 free shows with bands spanning country, folk, roots, blues, old time and bluegrass to nine venues along the waterfront. CAtch them at Sunny’s bar in Red Hook to Brooklyn Bridge Park’s recently opened Pier 3 in DUMBO, starting with an opening night gala at the Jalopy Theater and ending with the a bluegrass brunch at Superfine. Sept. 20-23, bkamf.com

Turn off your TV and see it live

There’s never been more television being made in New York City than right now, and fans can be sure they’ll meet the biggest stars and see fall’s most exciting pilots before they air at the Tribeca TV Festival. Tickets are on sale now, with highlights including a retrospective with Bryan Cranston, an extended cut of Anthony Bourdain’s final complete episode of Parts Unknown, and Meryl Streep interviewing comedian Tracey Ullman. Sept. 20-23, $30-$40, tribecafilm.com

This is the year of women, and Bustle is celebrating feminine courage, creativity and energy with its first-ever Rule Breakers Festival at the Lefrak Center in Prospect Park. Janelle Monae headlines a full day of performances that also feature Sofi Tukker and Samantha Ronson, plus a sound meditation with The Big Quiet, a retro roller skating session, and activities like jewelry-making, a braid bar, rooftop lounge by Glenlivet and more, with $10,000 from ticket sales being donated to She Should Run, a nonpartisan organization helping women run for office. Sept. 22, 1-8 p.m., $45, bustlerulebreakers.splashthat.com

Get a historic nautical tattoo

The South Street Seaport Museum is delving into the history of sailor tattoos with Gotham and Gus Wagner, with a rare chance to get a tattoo inspired by their collection of historic flash and ephemera. On Friday, Sept. 21, at 6:30 p.m., there will be a talk by Daredevil Tattoo co-founder Michelle Myles and the Seaport Museum’s Michelle Kennedy on the famous tattoo artist and New York’s tattooing history ($10), then on Saturday, Sept. 22 starting at noon, arrive at Melville Gallery (213 Water St.) to get one of Wagner’s historical tattoos by artists from nine of the city’s tattoo parlors. Tattoos are first come, first serve and priced from $50-$500, cash only. southstreetseaportmuseum.org

Open House New York offers an exciting chance to go inside the glamorous homes, active factories, buzzing offices and soaring skyscrapers normally closed to the public. Expanded to three days this year, the event takes place Oct. 12-14, but the list of sites just went live at ohny.org, with reservations opening up on Sept. 25 — and they’ll fill up almost immediately, so have your list ready.

The Vendy Awards, also known as the Oscars of New York street food, bring 25 of the most popular sidewalk chefs from food carts to food trucks all in one place. They’ve earned the nominations of their loyal customers, but now the whole city gets to try them all together on Governors Island. Taste your way across their wares (it’s unlimited with your ticket!) and vote for your favorite in several categories. Sept. 22, $100 and up, eventbrite.com

Pleasure isn’t just going to find you — learn how to ask for what you want, and for that matter learn what you want, with two days of classes, panels, product demos and more at the country’s largest convention about pleasure, Sex Expo New York. Sept. 22-23, free-$40, sexexpo.com

Play with the technology of the future

See what the tinkerers of the world have been up to at World Maker Faire in Queens, a weekend of getting hands-on with the technology being dreamed up by ordinary people in their own homes. The Maker Movement brings do-it-yourselfers out to trade tips, show off their craft and encourage creativity with interactive displays, demos, discussions and more in fields like art, engineering, medicine and technology. Sept. 22-23, $40-$80, makerfaire.com

Farm fun to kick off fall

It’s a bit of a haul but the Queens County Fair is so worth the trip. Held on an active farm museum, the annual tradition features all the usual county fair stuff like livestock competitions, eating contests, fresh produce and baked goods, piglet races and kids activities, plus lots of fall-themed fun like hay rides, a haunted house, a Bavarian beer garden, carnival rides and midway games, live music and dancing, and the star attraction, the three-acre interactive Amazing Maize Maze. Sept. 22-23, $10, queensfarm.org

Brooklyn’s busy Atlantic Avenue comes to a halt every September during Atlantic Antic, when the street becomes a giant marketplace with more than 500 restaurants, breweries and local vendors, many of them setting up on the street right outside their shops. In between browsing, you’ll come across activities like a giant inflatable slide and a petting zoo, plus 15 stages of entertainment by local musicians and community groups. Sept. 23, noon-6 p.m., Fifth Avenue between Hicks Street and Fourth Avenue, atlanticave.org

Whatever the weather, don’t let it keep you from the spectacular outdoor exhibit that is Photoville, the annual survey of photography where more than 600 artists cram entertaining and eye-opening images into 90 exhibitions and installations. In addition to browsing your way through the 65 shipping containers making their home in Brooklyn Bridge Park for two weekends, make time for panels, artist lectures, professional seminars, hands-on workshops — all free and open to everyone. There’s also a food and beer garden courtesy of Smorgasburg. Sept. 13-16 and 20-23, 4-10 p.m. Thurs/Fri, noon-10 p.m. Sat, noon-9 p.m. Sun, next to Jane’s Carousel, photoville.com

You don’t have to be Catholic to take part in the Feast of San Gennaro, the 10-day holiday that turns Little Italy into one big street festival with delicacies being grilled up on the sidewalk, bakeries turning out their best traditional treats, live music nightly, eating contests and more. Sept. 13-23, 11:30 a.m.-11 p.m. Sun-Thurs, midnight Fri-Sat, Mulberry Street between Canal and Houston streets, free, sangennaro.nyc