Authorities have recently warned against the spread of giant hogweed, a poisonous, invasive plant that has spread to northern areas of Virginia for the first time — and it makes poison ivy seem like a friendly, no-hassle itch.

Sightings have also been reported in the Staunton area and Middlesex County, the Isle of Wight County posted to Facebook. “There is a strong possibility that the Giant Hogweed could find its way into the Tidewater/Coastal Virginia area.”

Giant hogweed, or “Heracleum mantegazzianum,” is a member of the carrot/parsley family. It is reportedly dormant during the winter, and its flowers form in late spring through mid summer.

It originated in Asia’s Caucasus Mountains and, according to SUNY College at Brockport, one of the first North American plantings of giant hogweed was in Rochester, New York. It can be found across counties in New York, Connecticut, District of Columbia, Maine, Maryland and other northern areas.

Giant hogweed typically grows “along streams and rivers and in fields, forests, yards and roadsides” and most commonly spreads when its seeds are dispersed by waterways and animals.

According to the New York State Department of Environmental Conservation (NYDEC), the giant hogweed plant can grow between seven to 14 feet or taller with leaves up to five feet across.

The giant hogweed plant sprouts white flower clusters. Each cluster can contain between 50 and 150 flower rays forming an umbrella-shaped mass up to 2.5 feet wide. Their stems are green and hollow with purple splotches and “coarse white hairs.” Seeds are flat, oval and usually tan with brown lines.

Giant hogweed is most commonly mistaken for cow parsnip, which has “white flat-topped flower clusters no larger than 1 foot wide.” Watch the below video to distiguish between the two:

Giant hogweed can cause serious burns

Giant hogweed contains a clear, watery sap that can cause third-degree burns if affected skin comes in contact with sunlight. This reaction can result in painful blisters that leave purple or black scars on the skin for months. Long-term sensitivity to sunlight, according to the NYDEC, is common.

This toxic sap is more highly concentrated on the lower part of the plant’s stem and on its white hairs, flowers and seeds.

Additionally, if the sap gets in your eyes, it can cause permanent blindness.

If exposed, wash and cover the affected area right away

If your skin is exposed to the plant’s sap, avoid contact with eyes and wash it off immediately with soap and cold water, advises the New York State Department of Health. Avoid contact with sunlight for 48 hours. 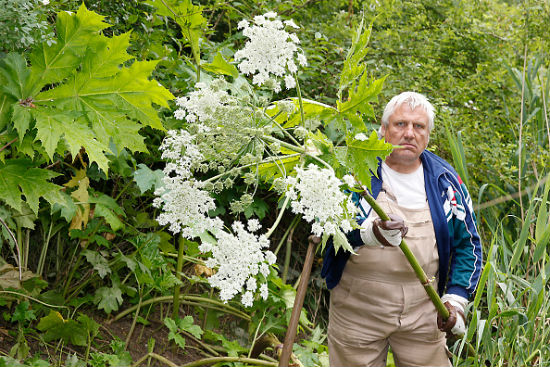 Make sure to wear disposable gloves and protective clothing that covers the skin when working with giant hogweed. Wash these clothes separately from others with warm water and detergent.

The site advises to “call your healthcare provider for any severe reactions or if sap has gotten into your eyes.”

Do not use a weed-whacker to remove it

Don’t remove giant hogweed by using a weed eater or brush cutter because this may “splatter” the sap and release seeds, which could promote new growth. Always call professional authorities to properly dispose of these plants with herbicides or other methods.

For more on giant hogweed control, click through to the NYDEC site.