Quick, name a TV show that has (or had) a massive dedicated following of fans. Chances are you picked Game of Thrones, which will air its highly anticipated final season in April. But if you picked The X-Files, you would be just as correct since the paranormal police procedural has remained popular for decades. Enter Irish actor Aidan Gillen, a Game of Thrones alum who, thanks to History’s new X-Files-esque show Project Blue Book, is about to become a part of both worlds.

Gillen spoke with Metro ahead of Project Blue Book’s premiere on Tuesday night. The X-Files was not necessarily something the 50-year-old actor considers himself a huge fan of. However, when it comes to the popular mythos that informs it, Project Blue Book and similar shows and movies about aliens and UFOs, he admits he’s well-versed.

“A lot of the great movies of this genre actually were produced in the era they supposedly happened in, the 1950s,” he says. “We also knew of them through popular TV shows like The Twilight Zone and The Outer Limits, which were both shown in Ireland. At least when I was growing up, everyone was quite familiar with this stuff. I think it was a universal thing by then, for sure.”

Gillen also credits Steven Spielberg’s iconic film Close Encounters of the Third Kind, which popularized the classification system devised by J. Allen Hynek, the acclaimed UFO researcher he plays in Project Blue Book. (Hynek himself also cameos in Spielberg’s film.) Despite the global appeal of these stories, however, the actor made sure to quiz his family about its relevance back home in Ireland when the events depicted in the series were taking place. 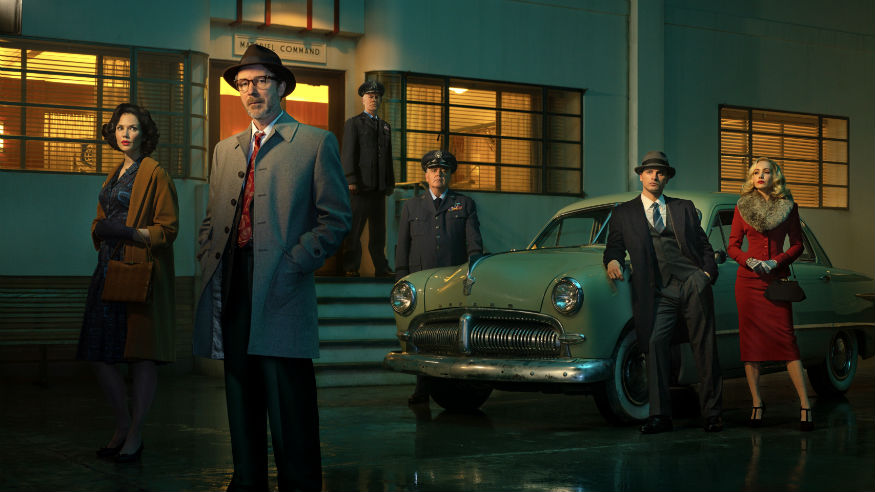 “I quizzed my mother about this since she was around in the 1950s. I asked her, ‘Were there any sightings in Ireland at the time? Was this phenomenon a palpable thing there?'” he says. “My mother then recounted a story of a UFO that she had seen herself in western Ireland in the early 1950s. That was pretty interesting.”

“In Ireland, there’s a lot of credence given to otherworldly things or things that are inexplicable. They’re a part of our culture, be it ghosts or UFOs or whatever. It’s quite acceptable that there are things at work that we can’t see or quite totally comprehend.”

Despite how ridiculous some may consider Project Blue Book’s subject matter, especially historians or scientists who would want to dispute its accuracy, Gillen remains philosophical about the enterprise. He even admits that some of his own upbringing regarding, and his exposure to aliens and UFOs in popular culture, made its way into his portrayal of an American astronomer and skeptic turned believer.

“I’m an open-minded person,” he says. “A logical thinker like Hynek was open to stuff that might have been beyond his own comprehension. Just beyond his, or our, current understanding, because there is so much we don’t know about the universe and our place in it. Where we may have come from or where we’re going. We like to think we have an understanding of it all through physics, that we’ve got everything down, but I don’t know if it’s arrogant or not to assume this.”

“What’s beyond our universe? I know that the word ‘universe’ means everything, but we know only about a tiny corner of what our universe entails. That’s it. Who knows what else is out there?”