A best-of horror movie festival, the year’s largest cocktail convention, a beach dance party and tons more activities mean it’s time to say your prayers to ask the favor of the rain gods and get out there.

The best things to do in New York City this weekend 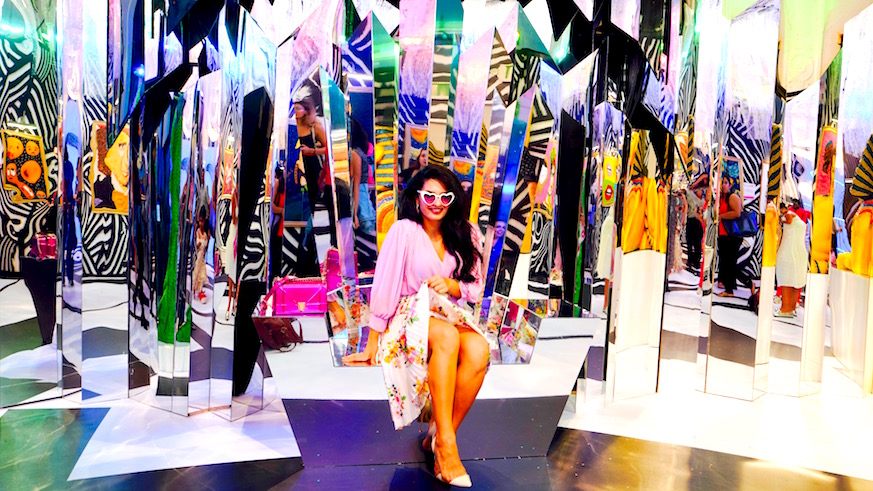 With 12 immersive rooms ranging from sea creatures made of candy to an oversized garden of lollipop trees, plus an emoji swing and rainbow-dressed pigs that fart confetti, Candytopia is the immersive art installation you need to see to believe. Visiting for three months, the pop-up will satisfy any sweet tooth with endless portraits, animals and even the Statue of Liberty made out of sweets (and, of course, there are treats to eat in every room, too). Through Nov. 15, Penn Plaza, 145 W. 32nd St., $26-$34, candytopia.com

Refinery 29 started the trend of made-for-Instagram galleries, and it’s still doing it best with 29Rooms, a collection of — you guessed it — 29 individual galleries crafted by major celebrities, from visual artists to actors (and a handful of branded rooms, but in our experience those have been cool too). Tickets are on sale now to MasterCard holders and open to the general public on Aug. 16 — and they’re gonna go fast. Sept. 6-9, 13-16, 588 Baltic St., $39.99-$129.99, eventbrite.com

The world is your grocery store

When you picture sustainable eating, or harvesting your own food, you probably imagine a rugged trail or scenic farm. But you could actually live off the plants you pass every day. Learn one of the city’s greatest secrets with In the Weeds: Hyperlocal Foraging at the Museum of Food and Drink. Jaime Young of Sunday in Brooklyn and Will Horowitz of Ducks Eatery will share their passion for finding edible ingredients in the sidewalks and parks of the city. Aug. 16, 6:30 p.m., MOFAD Lab, 62 Bayard St., Brooklyn, $25, mofad.org

See Madonna in her prime

This weekend, you’re invited to embrace your material instincts with Madge when Nitehawk Cinema presents a special one-night-only screening of The Girlie Show — Live Down Under, a complete recording of Madonna’s record-breaking concert in Sydney during her fourth world tour in 1993. As part of the 25th anniversary of the film’s debut on HBO, and in honor of the Queen of Pop’s 60th birthday, Nitehawk is offering prizes, a custom menu and an after-party downstairs at Lo-Res. Aug. 16, 9:30 p.m., Nitehawk Cinema, 136 Metropolitan Ave., Brooklyn, $12, nitehawkcinema.com

Come to the variety circus

Cross your fingers that last week’s washed-out showtime won’t be repeated! Tropical outdoor dance hall Brooklyn Mirage is holding an immersive screening of The Fifth Element with projection effects, a 32-foot screen, an interactive photobooth of movie scenes, an ice cream social and lots of cookout food, a post-show dance party, and a full cocktail menu of tropical drinks that will make you think you’re aboard the Fhloston Paradise, all courtesy of BBQ Films. Aug. 17, 6-11 p.m., 140 Stewart Ave., Brooklyn, $14-$50, eventbrite.com

Horror movie fans don’t have to wait for Halloween with Scary Movies XI, a week devoted to the genre’s goriest and most iconic films from around the world. This year kicks off with the New York premiere of high school zombie musical Anna and the Apocalypse, followed by the Opening Night Zombie Christmas Party. There’s a night devoted to Latin American horror and one for the best new indie flicks, plus a live edition of radio-play Tales from Beyond the Pale. Save with a three-movie package. Aug. 17-23, Walter Reade Theater, 165 W. 65th St., $15-$33, filmlinc.org

Jazz cruise the night away

Make the most of sunshine that lingers well into the evening, and weather that doesn’t require a sweater after sunset just yet, with an Evening Jazz Cruise. Board the 1920s-era yacht Manhattan and enjoy two hours of live music from The Sound Waves trio, performing hits by the likes of Duke Ellington and Cole Porter, as well as Motown and R&B. Your ticket includes an open beer and wine bar, with cheese plates for purchase, as you sail around the NY Harbor. Aug. 17-Nov. 18, Chelsea Piers at W. 22nd St., $64, fareharbor.com

Dance on the beach

As part of its free outdoor concert series across New York, City Parks’ SummerStage series hosts three acts this Friday on the boardwalk at Rockaway Beach. The lineup features headliners Gilligan Moss, a dance-pop duo formed by childhood friend Evan and Ben, making their way to Brooklyn by way of Chicago ahead of the release of their new EP What Happened on Aug. 23, as well as performances by argonaut&wasp and Jitwam. SummerStage continues through Sept. 27. Aug. 17, 6-9 p.m., SummerStage, Rockaway Beach Boardwalk at 94th St., free, cityparksfoundation.org

Barbecue by the riverside

Dig into some of the city’s best barbecue with waterfront views when the Blues BBQ returns to Hudson River Park’s Pier 97. Pick and choose from the likes of Brother Jimmy’s, Mighty Quinn’s, Pig Beach and Dinosaur Bar-B-Que, all while listening to live tunes from the Slam Allen Band, Dawn Tyler Watson and the Welch-Ledbetter Connection. Glenfiddich will be offering sips, with beer for purchase. Save room for dessert from Ben & Jerry’s and Melt. Aug. 18, 3 p.m., Pier 97, Hudson River Park at W. 59th St., free, hudsonriverpark.org 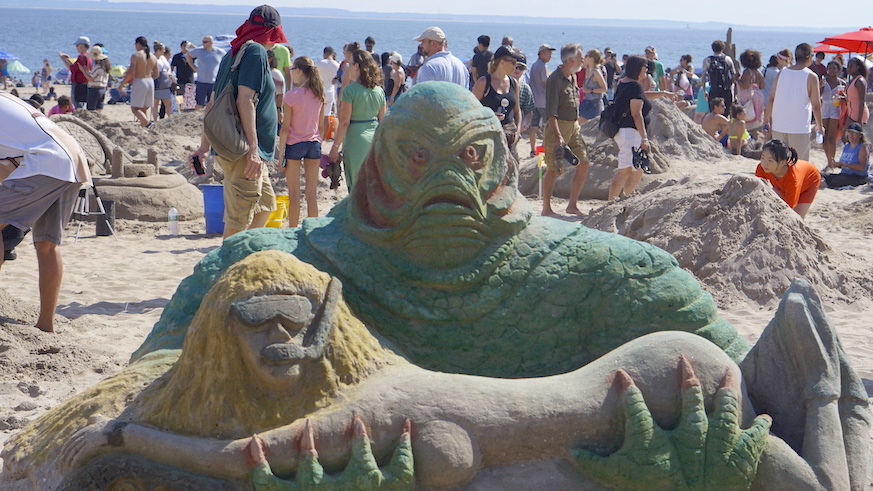 Sand artist will create impressive, strange and towering sculptures on the shores of New York City’s own amusement park during the 28th annual Coney Island Sand Sculpting Contest. The beach and Boardwalk from West 10th to 12th streets will be given over to the visionaries, and it’s free to participate or gawk. Aug. 18, noon-4 p.m., free, wearebcs.org/sand

Get woke at the queer Comic Con

The geek community is, ironically, not always the most accepting space. So the queer nerds of Geeks Out created the world’s largest convention for all rainbow flag-flying fans, Flame Con. Get to the Sheraton Times Square for two days of comics and entertainment with special guests from the LGBTQ fandom, performances, screenings, cosplay and more. Aug. 18-19, $25-$65, flamecon.org

Consider yourself a cocktail connoisseur? Staying on top of the latest trends at the fifth annual New York Cocktail Expo this Sunday at the Melrose Ballroom in LIC. Sample the latest flavor combos from the city’s top mixologists (plus cider and beer), with over 60 participants. This year’s competition includes the largest-ever Tiki Throwdown and a new Rum Room. VIPs can add early entry or a rooftop after-party. PLUS: Save 50% with code “cocktailfest” while tickets last. Aug. 19, 3-7 p.m., Melrose Ballroom, 36-08 33rd St., Queens, $65-$280, nycocktailexpo.com

With such a proud Asian-American population, it should come as no surprise that the world’s largest India Day Parade takes place right here in New York. This Sunday, it’s free to watch the colorful, cultural, celebrity-decked floats gliding down Madison Avenue, plus live music and dance performances both in the parade and along the route, and a food court with authentic cuisine. Aug. 19, noon, Madison Ave. between 25 and 38th streets, free, fianynjct.org

An island party for a good cause

Join Women to the Front as they get the word out about voter registration and today’s most pressing social issues ahead of midterm elections. They’re hosting a fundraiser party at Governors Island’s waterfront bar Island Oyster with food and drinks for sale, as well as games and live music from bands like Train Brass Band, Fleur Seule and Bon Temps. Your ticket includes a free cocktail, children attend free, and all proceeds go to Spread the Vote. Aug. 19, 3-6:30 p.m., Governors Island, $40, getontheboat.splashthat.com