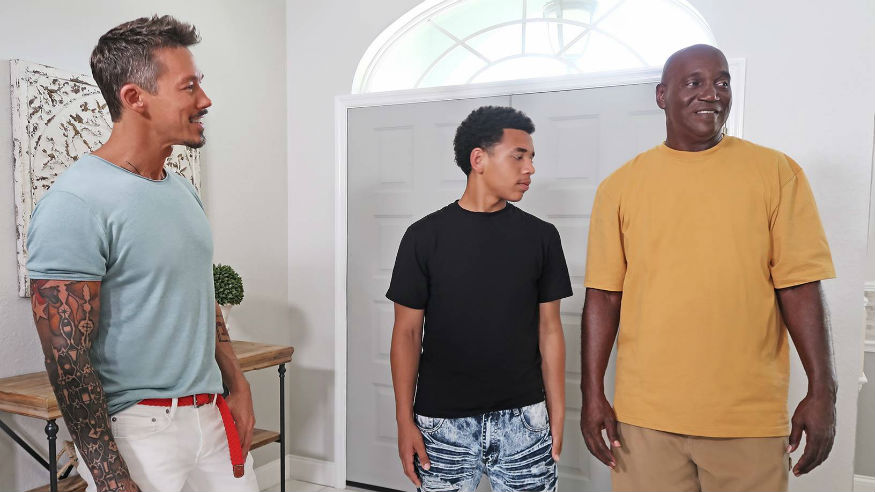 David Bromstad knows what it’s like to win the lottery. Well, in a figurative way at least. After winning HGTV’s competition show Design Star in 2006, he was immediately catapulted into stardom as a TV personality and fixture on the network. As the host of the hit series Lottery Dream Home, he helps recent lottery winners find their perfect homes with their newfound money. The HGTV star has found out that, sometimes, these winners need advice on what not to waste their money on and other times they might need a little coaxing in treating themselves with their riches. We caught up with David Bromstad to talk about the show.

David Bromstad will help you spend your millions … if you let him!

Coming into all of that money at once after winning the lottery must be a pretty blindsiding moment in someone’s life. How do you help to guide people through and maintain a healthy perspective while buying a home?

They’ve really thought about what needs to be done and what they can do and what their means are. Of course, what people don’t talk about is what their current job is or what their salary is. That all factors into how much money they can spend. I’m not getting the doe-eyed “I just won a $100 million” winners. Granted we had one of those! Which was great. But, when I come in they’re already ready, they’re already set. They’ve talked to financial advisers. They’re ready to spend whatever they can afford at that time.

Has there ever been a time where you have been like “well, maybe you could spend a little more?”

David Bromstad: (laughs) Oh my goodness. Yes! I had a winner in I think it was North Carolina and I think she won like $10 million. I was like “Yay! How much are we spending?” “$150,000” and I go “Boo!” I think it was Upstate New York. It was one of the two. I was like “No! Why?” And she was like “I already have my forever house. I just want a lake house.” I was like “Can we spend more? You have money!” (laughs). You could have your forever house, it’s beautiful, you clearly already have money. Blah blah blah. Let’s spend more! But, no. She wanted to keep her money. She was young, she was in her early 40’s. So she was like “nope” and I was like “okay, you’ve already thought this through. I’m not going to convince you!”

When people are being that protective and hesitant to spend their money, is there something you urge them or convince them to spring for or treat themselves with?

David Bromstad: Granted, I do have those conversations with them. Again, what I don’t always know and what they don’t tell me is what their spouse’s salary is, what their salary is together if they’re currently working, and what they have saved. So it’s really not my business to go “listen, you just won a million dollars. Why are you spending $800,000 on a house?”

We did one outside of the D.C. area a few seasons ago where they won a million dollars and they were spending $800,000 on a house. But it makes sense in an area like that because you can’t get a house for less than $600,000 anyways! So what it does is just elevates the plans of what they want to do five or ten years down the line. Listen, if someone wants to spend all of their money, I’ll help them spend.

What kind of advice would you give someone in terms of buying a fixer-upper instead of a brand new home?

David Bromstad: Oh, yes! Those are my favorite ones to kind of walk through because that’s my specialty. I’m a designer and an artist. For instance, this cabin that we were looking for in Upstate New York, it was obviously a fixer-upper and we looked at some serious dumps. But, that’s what she wanted to look at. So what I needed to do was to get inside of her mindset before she got there. I need to get to know her and her aesthetic and what she wants. She really wanted to put her own stamp on it. She just really wanted a great piece of property and then she’ll do the rest. I’m like “great.”

So, walking through the property and giving them designer and structural advice as much as I possibly can to either convince them or not convince them of the house we are looking at as a great option is so fun to do. It just makes house hunting even more fabulous.

Did you have a similar home buying experience when you first became famous?

David Bromstad: I think the reason why the network picked me for the show is that I basically won the lottery when I won Design Star which got me on HGTV. So, I feel very similar. My lottery is more of a long-term payout because I get so much money a year. It’s been such a blessing. So I understand what the lottery winners are going through because I went from absolutely nothing to being on TV and having more than I thought I ever would.

My very first house was before I won. But, when I bought in Miami I probably looked at 150 different houses (laughs). I felt so bad for my real estate agent! But it was a lot of trial and error. The more you look at houses, the more you realize what you don’t want and what you do want. Having that experience of that and being a buyer and being highly picky gives me a bigger and a better perspective when really listening to my clients and finding those perfect houses and the neighborhoods they want to be in. For me, I live in Orlando and to me, it’s all about the neighborhood. I want to be in the Gay-bor-hood but I still want to be close to everything. It’s just all of those factors that I have to put myself into when I look in a different area.

New episodes of My Lottery Dream Home with David Bromstad will premiere on January 4th at 9 pm.