Did Pippa Middleton have her baby? Kate Middleton and Prince William are a party of five, and the Duchess of Cambridge’s younger sister confirmed her own pregnancy in late June after months of rumors. But, did Pippa Middleton have her baby?

Did Pippa Middleton have her baby yet?

This is Pippa and husband James Matthews’ first child together. “Everyone is delighted and mother and baby are doing well,” Pippa’s representative told PEOPLE.

George, Charlotte and Louis have a new cousin! James and Pippa Matthews (Middleton) have had a baby boy.
He was born Monday 15th October at 1.58pm, weighing 8lb and 9oz.
Everyone is delighted and Mother and baby are doing well.

Pippa confirmed her pregnancy in a June fitness column published on the UK’s Waitrose Weekend. “When I learned the happy news that I was pregnant, I realized I needed to adjust my normal 4-to-5-day-a-week routine and find a way of continuing my exercise safely throughout the three trimesters,” she said.

Being an active person (she’s competed in numerous triathlon and skiing races in the past), Pippa kept up a regular workout regime during pregnancy.

“I’ve noticed my body change but through exercise I feel it’s being strengthened,” she said at the time.

Pippa Middleton Matthews is featured in a new column for @waitrose weekend. “Exercising during pregnancy” pic.twitter.com/2rktWaKaFg

Pippa, 35, seemingly showed her baby bump prior to the June reveal.

Take, for instance, this shot from the French Open in May: 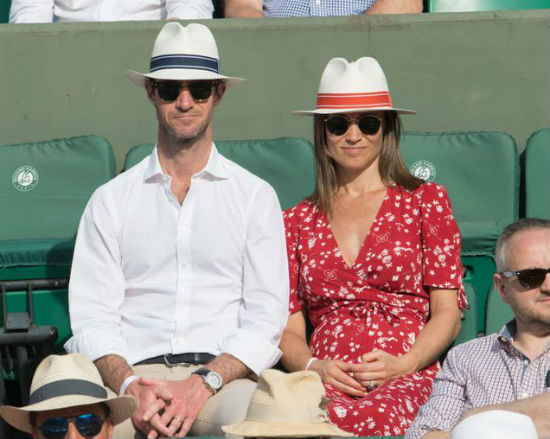 Kate has experienced severe morning sickness called “Hyperemesis Gravidarum,” but Pippa revealed to Waitrose Weekend that she didn’t suffer from the same fate: “I was lucky to pass the 12-week scan without suffering from morning sickness.”

And now, Pippa and her family can celebrate a successful delivery. (Also, in case you missed it, Meghan Markle is expecting a baby next spring!)

Did Pippa Middleton have her baby? Yes. And this boy has some very royal cousins to play with.