Are you eager to vote in the Massachusetts election this November? You’re in luck — Boston will offer early voting this year, Mayor Marty Walsh announced on Monday.

The Massachusetts ballot questions have been finalized, so residents just need to know when and where to vote. Early voting in Boston will begin Monday, October 22 and run through Friday, November 2, giving residents a chance to cast their votes ahead of the November 6 state election.

Early voting in Boston was unanimously approved for the 2018 election by the Boston Election Commission Board. The practice was first offered statewide for the 2016 election, and was deemed a success:  In Boston, 47,845 people voted early, representing 11.6 percent of registered voters, and across the commonwealth, more than 1 million residents, or 23 percent of the state’s registered voters, cast their ballots ahead of election day.

“Ensuring all Boston voters are able to vote conveniently, and on their own schedule, is paramount to ensuring voter turnout,” Walsh said in a statement. “Voting is core to our democracy, and I encourage Boston voters to take advantage of all the resources the City provides for elections.”

How to vote early in Boston

Any voter registered in Boston can cast their ballot early at any early voting location. Unlike with absentee voting, you don’t need to explain why you want to vote early, and you vote in person. You must be registered to vote at least 20 days before an election in Massachusetts. To see if you are registered to vote in Boston, check your voter registration at sec.state.ma.us/VoterRegistrationSearch/MyVoterRegStatus.aspx.

City Hall will serve as the main location for early voting in Boston. It will be open for voting Monday through Friday from 9 a.m. to 5 p.m. during the designated two week period. On Tuesdays and Thursdays, City Hall will stay open later, until 8 p.m. for those who want to vote early.

Pop-up polling locations will also be available throughout the city on Tuesdays and Thursdays during the early voting period and will be open from noon to 8 p.m.

The 2018 Vote Early Boston schedule also includes a full weekend of early voting on Saturday, October 27 and Sunday, October 28. During this weekend there will be nine voting locations — one in each city council district, according to the city — open on both days from 10 a.m. until 6 p.m.

The full schedule for early voting in Boston is below and can be viewed here. 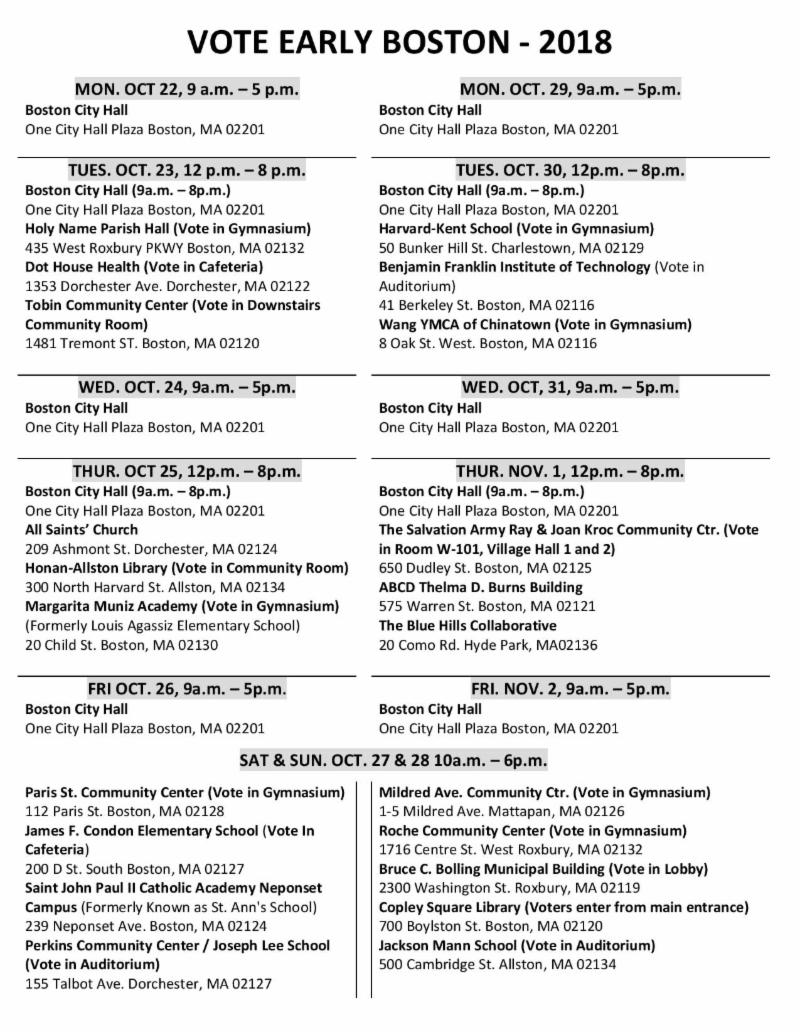