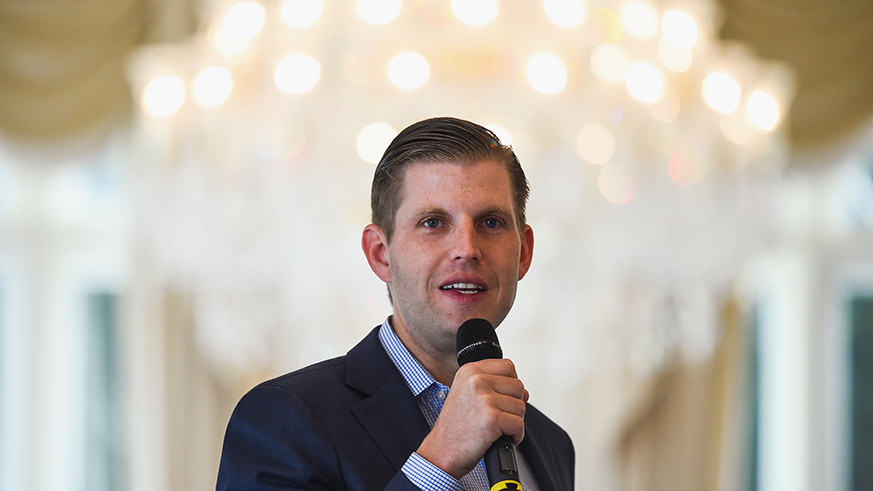 “The irony of an ABC reporter (whose parent company Disney has profited nearly half a billion dollars on the movie ‘Pocahontas’) inferring that the name is ‘offensive’ is truly staggering to me,” Eric Trump tweeted Tuesday.

The irony of an ABC reporter (whose parent company Disney has profited nearly half a billion dollars on the movie “Pocahontas”) inferring that the name is “offensive” is truly staggering to me.

President Trump tried to make a joke during the White House event honoring the Navajo WWII veterans but many people quickly condemned his attempt.

After Trump made the remark, ABC News reporter Jon Karl asked White House press secretary Sarah Huckabee Sanders: “Why did he feel the need to say something that is offensive to many people while honoring the Navajo Code Talkers, these genuine American heroes?”

Sanders responded by saying it was offensive for Sen. Warren to lie about her heritage for the sake of advancing her career. She also added that the term “Pocahontas” isn’t racist.

Eric Trump tried to argue that the ABC reporter had no right to say the term “Pocahontas” is offensive when the parent company he works for (Disney) has been making money from “Pocahontas” for years.

Shortly after Eric Trump tweeted his defense for his dad, people quickly responded, indicating that he missed the point of the argument.

I feel confident that Eric Trump does not know that Pocahontas was a real person https://t.co/CUwfTuG6w4

Eric Trump doesn’t understand the difference between Disney making a movie about the actual Pocahontas, and his dad calling a white senator “Pocahontas.” https://t.co/0IW4GqKdrW

the movie is about the real Pocahontas u stupid ass. ur dad is taking the name and using it as a slur. racist what part of that do u not get? just how dumb are you?

The irony of a grown man like Eric Trump not understanding how “intent” factors into whether or not a word can be used as an insult is truly staggering to me. Gay is not a bad word, but people often use it as a way to demean others. Your father is doing the same with Pocahontas. https://t.co/5x8fwZfyXd

Weird that Eric Trump hates Pocahontas, since his dad stole his platform from the “Savages” song pic.twitter.com/cK2ZetpGAF

It’s offensive when used as a pejorative (pssst Eric- means expressing disapproval or contempt) as in, for example “you are almost as dumb as Eric Trump”. pic.twitter.com/hpmrDVJAeN

Eric Trump hasn’t responded to the backlash he received about his attempt to defend his dad.