Both Felicity Jones and director Mimi Leder instantly knew that they had to be involved in On The Basis Of Sex, the Ruth Bader Ginsburg biopic about her early struggles as a burgeoning lawyer and the groundbreaking tax case that changed her life and career.

“I responded immediately to the material,” Jones tells Metro. “I had been looking for something like this for months and months after Rogue One. I wanted to tell a story about career and ambition. But this was also about a phenomenal woman. It was the perfect story.”

On the Basis of Sex: Ruth Bader Ginsburg is a ‘punk icon’

Both Leder and Jones saw parallels between their own professional struggles in the movie industry and what Ginsburg had to endure after excelling at both Harvard and Columbia Law schools, only to be rejected by every New York City law job she applied for.

“I really emphasized with Ruth being the outsider. I channeled that, as I have been the only woman on set. That was really helpful,” notes Jones.

“Of course this is on different levels, but we have both broken the glass ceilings in our industries for a lot of different generations to come,” says Leder, who was the first female graduate of the AFI Conservatory. “I know what it is like to have doors slammed in my face.”

But Leder stresses that she was also hugely attracted to the love story that is at the heart of On The Basis Of Sex, too.

“I also know what it is like to have a loving partner that supports me in every way. I really understood that.”

“Discrimination is an injustice to us all. It is not just a woman’s issue. We all need champions. We all need love in our lives. I wanted to show what love and family can bring to an individual.”

For Ruth that was her husband of 56-years Marty Ginsburg, portrayed by Armie Hammer in On The Basis Of Sex, and the story of their love and the hardships that they had to endure and overcome are, frankly, so unbelievable that they couldn’t have been scripted. 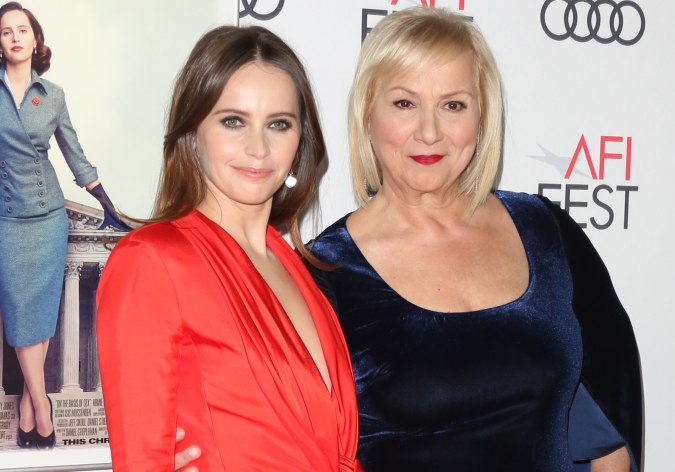 “Marty got testicular cancer at 25 when they were both at Harvard,” explains Leder. “The survival rate was just 5 percent. She told him, ‘We’re not giving up!’ She was a force.”

“She took care of him. She went to her classes and his classes, did all of the studying for him so that he could continue on. And she took care of their child. I don’t know anyone that could do all of that. She is a unique powerhouse of passion and will. She’s a real icon for all of us.”

“She didn’t come from a privilege background, but she managed to change the system. She is a real fighter. And she did it all on her own terms, too.”

On The Basis Of Sex is in theaters now.