Flu shot not so effective this year - Metro US
Health

Flu shot not so effective this year We have some bad news if you’re one of the people who opted for a flu shot this year: It might not actually keep you from getting the flu.

“It’s just one of those years where the CDC is seeing that this strain of flu is only somewhat covered by the vaccine,” Jennifer Radtke, manager for infection prevention at the University of Tennessee Medical Center in Knoxville, told USA Today. “They’re seeing that it’s anywhere from 10 to 33 percent effective, so anytime there’s a mismatch between the vaccine and the circulating strain of the flu, you’re going to see more cases.”

Why flu shot 2017 effectiveness is low

It takes scientists at least six months to grow the flu strains used in the annual flu shots, so they have to decide which strains to target months in advance — a decision made based on the previous flu season in Australia. The problem? Influenza viruses tend to change during those months, making the flu shot less effective.

“So by the time we pick a version of the virus to make into a vaccine and put it into production, it might take six to eight months and in that time the virus might change,” Dr. Pardis Sabeti, a Harvard professor and infectious disease expert, told CBS This Morning. 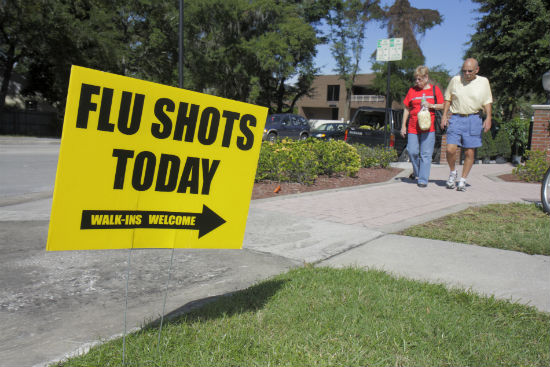 This is concerning for health officials, with the U.S. Centers for Disease Control reporting that “influenza activity increased sharply in the United States” during the second-to-last week of 2017. The most common strain found in those with the flu during that week was influenza A(H3) with 36 states reporting “widespread” cases of the flu with three confirmed child deaths during that week.

Should you still get the flu shot in January?

Yes, you should still get the flu shot even if it’s not as effective, according to medical experts.

“We often see a season last three months, so there’s still time to do it,” Dr. Richard Zimmerman, a physician at the University of Pittsburgh School of Medicine, told Newsweek.

“Even 10 percent effective is better than nothing, and a lot of it has to do with herd immunity — the more people are protected from it, the more other people will also be protected,” Sabetti added to CBS This Morning. “In fact, in a year where it’s low effectiveness, it’s even more important that everybody get it so we can get as much resistance and we don’t allow the virus to thrive and grow and keep changing.”

And if you do get a flu shot? It pays to be in a good mood when you go. A 2017 study conducted by researchers from Nottingham University in the U.K. found that “greater positive mood, whether measured repeatedly over a 6-week period around vaccination, or on the day of vaccination, significantly predicted greater antibody responses to influenza vaccination.”

Human bodies have a better reaction to immunization if we’re not stressed out about it — not always easy when it comes to getting a needle stuck into your arm.