Nathalie Emmanuel hasn’t been home a lot lately. By home, she means London.

“I mean, my stuff is there, you know?” the English actress tells us. “I’m rarely here. But I am technically living in London.” But traveling’s fine by her. “I can’t get enough of it at this point. There is going to come a time when it doesn’t happen as much. You might as well enjoy it while it is.”

In short, she’s been busy. Since 2013, Emmanuel, 28, has played Missandei, interpreter for Daenerys Targaryen, on “Game of Thrones.” Then she got sucked into the “Maze Runner” franchise. Then she became part of the speed junkie team (sorry: “family”) of the “Fast and/or Furious” series. Starting with “Furious 7” and continuing with the new “The Fate of the Furious,” she’s played Ramsey, a hacker and our heroes’ other female team member (after Michelle Rodriguez), who luckily doesn’t have to do any of the driving.

Even though the eighth installment is only Ramsey’s second appearance, Emmanuel says her character’s already a bit jaded by the experience. For one thing, she spends some of the film being hit on, badly, by Roman (Tyrese Gibson) and Tej (Chris “Ludacris” Bridges), prompting many close-ups of her rolling her eyes.

“It’s like, ‘Oh, for goodness sake, these silly boys,’” Emmanuel says. “She sort of finds it slightly amusing. She’s probably been getting that for a while now. I quite like the fact that she’s sort of over it — like, ‘OK, guys, we get it.’”

It also shows, she thinks, how much Ramsey stands out from the pack. “She’s there as somebody who is very skilled, who has earned her right to be part of this team. She’s not necessarily connected to anybody else. She’s very independent of them. They’ve all grown up together, and she doesn’t have that history.” 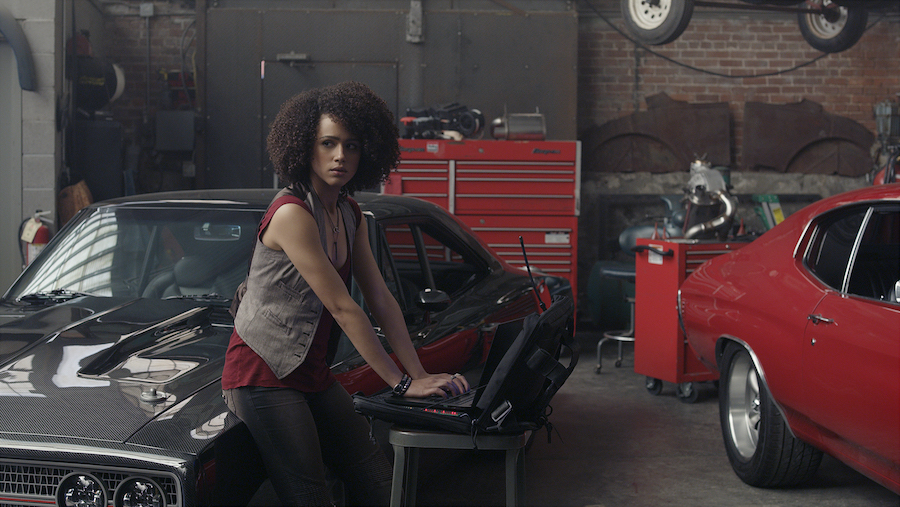 In real life, Emmanuel isn’t quite the techie she plays onscreen. You don’t have to be a hacker to play one. But you do have to look like you know what you’re doing, which isn’t always easy.

“Sometimes you can tell when someone’s faking it. Some actors will say you can tell when an actor doesn’t smoke. I was worried people would say, ‘You can tell she doesn’t type like that all the time,’” Emmanuel says. So she basically practiced, well, typing. “A trick I would do when filming is I would think of sentences in my head and type those on the keyboard — phone numbers or addresses, whatever. I tried to make it look like there were thoughts coming through my fingers.”

The “Furious” movies may be among the biggest entertainments on the planet, but “Game of Thrones” is right up there. Over the five seasons she’s played on the show, she’s been able to let Missandei grow considerably from the quiet, reserved character she was at the start.

“It used to be that she wasn’t considered a human being. She was considered property. Suddenly she’s had to navigate a landscape that’s completely foreign to her. She’s had to make choices. She’s had feelings or emotions and wondered whether she should express them,” Emmanuel explains. “It’s all new territory for her. If you’ve been brainwashed and indoctrinated your whole life and suddenly your surroundings change, there’s always going to be a slight battle with that inside of yourself. Over the series you get to see her evolve and open up, find her way, essentially. It’s great to have the time to explore that.”

That exploration of complicated characters extends to everyone else, too, she finds. “It really invites us to not see them as just good or bad or heroic or funny. They’re all complex characters with layers,” she says. “An example would be Jaime Lannister: We hated him from the beginning, but we’ve grown to love him since he was separated from Cersei. He’s done some bad things, but he’s also done some noble things. We’re invested in them.

“And sometimes they get killed horribly,” she adds. “It makes you want to scream — or cheer.”