“I’ll use this spoiled page to write down ‘dirty’ jokes,” reads a newly discovered entry in Anne Frank’s diary. It’s dated September 28, 1942, and in it, the German-Jewish teenager, then 13, discusses her understanding of menstruation, sex, puberty and prostitution.

Anne had kept these pages secret by pasting pieces of brown “gummed” paper over them, but they were deciphered through “image processing technology” by researchers at the Anne Frank House, Huygens Institute of Netherlands History and NIOD Institute for War, Holocaust and Genocide Studies.

“Anyone who reads the passages that have now been discovered will be unable to suppress a smile,” Frank van Vree, director of NIOD, said in a statement. “The ‘dirty’ jokes are classics among growing children. They make it clear that Anne, with all her gifts, was above all also an ordinary girl.”

Anne received her first diary, which featured a red plaid cover, on June 12, 1942. According to the Anne Frank House website, it was almost completely filled by the end of 1942. From that point on, she wrote in a series of small notebooks — but in the spring of 1944, she heard that the Dutch government wanted to publish writings from people suffering under German reign. The girl then began rewriting her entries on loose leaf for intended publication.

Peter de Bruijn, a senior researcher at the Huygens Institute, told the New York Times that Anne could have pasted over her September 28, 1942 entry in anticipation of future publishing. He also said that these passages are important not for their sexual content, which she’s written about before, but for the more “literary tone” she uses. This, he said, shows her growth as a writer.

Unfortunately, the Anne Frank House said it would only post the new text on its website in Dutch for now. Here’s everything we could find, though, of translated bits from the hidden entry on sexuality.

According to the Associated Press, Anne wrote about a woman getting her period around the age of 14. She penned that it’s “a sign that she is ripe to have relations with a man but one doesn’t do that of course before one is married.”

The Anne Frank House noted the jokes might have been ones she’d overheard while in hiding.

One joke read, “Do you know why the German Wehrmacht girls are in Holland? As mattresses for the soldiers.”

Another went like this: “A man had a very ugly wife and he didn’t want to have relations with her. One evening he came home and then he saw his friend in bed with his wife, then the man said: ‘He gets to and I have to!!!'”

The New York Times reported that Anne wrote about prostitution in Paris.

“All men, if they are normal, go with women, women like that accost them on the street and then they go together,” she wrote. “In Paris they have big houses for that. Papa has been there.”

“I sometimes imagine that someone might come to me and ask me to inform him about sexual matters,” Anne wrote. “How would I go about it?”

She then began to describe “sexual matters” to an imaginary friend with phrases like “rhythmical movements” and, in reference to contraception, “internal medicament.”

Addressing an imaginary person, de Bruijn said, “creates a kind of literary environment to write about a subject she’s maybe not comfortable with.” 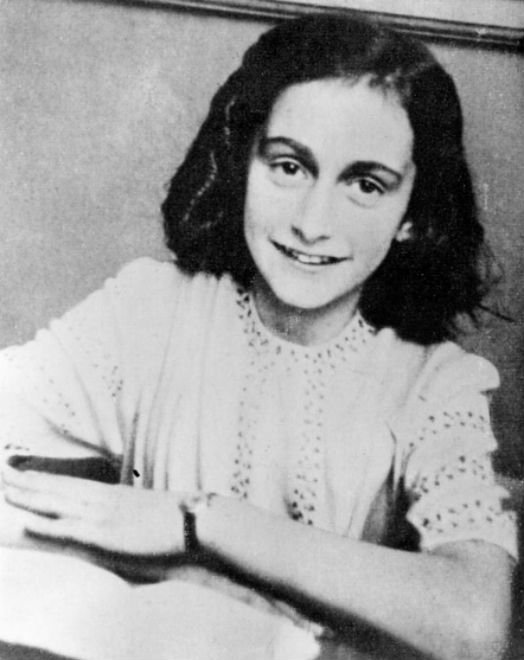 Anne and her family members were deported to Auschwitz on August 4, 1944. She died at the Bergen-Belsen concentration camp the following year, three months before her 16th birthday, but she lives on through her diaries. Her father, Otto, donated them to NIOD, and they’re permanently displayed at the Anne Frank House in Amsterdam.

“[She] writes about sexuality in a disarming way,” Ronald Leopold, executive director of the Anne Frank House, said of the newly discovered pages. “Like every adolescent she is curious about this subject. … They bring us even closer to the girl and the writer Anne Frank.”