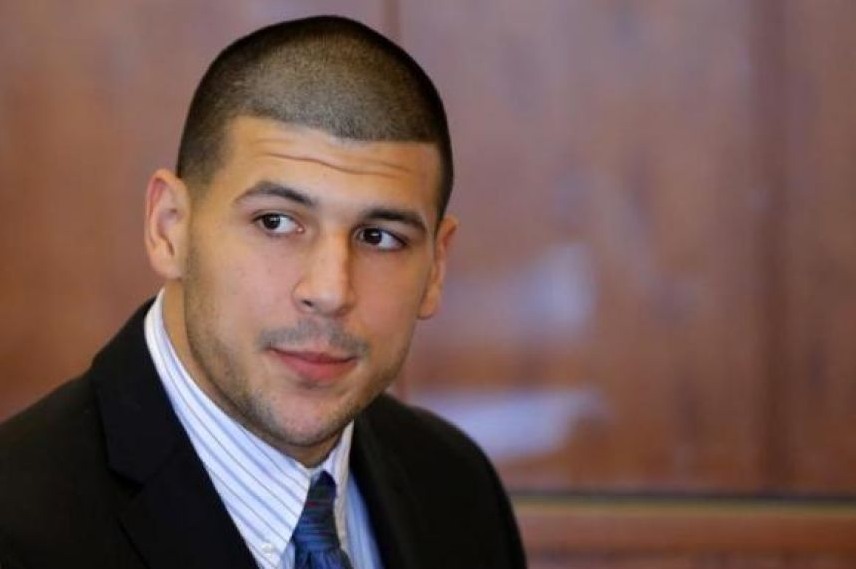 Boston journalist Michele McPhee was a guest on WEEI’s “Kirk and Callahan” show Monday to discuss her book about the 2013 Boston Marathon bombings titled, “Maximum Harm.”

Hernandez is currently serving a life sentence for his role in the murder of Odin Lloyd, but he was acquitted last Friday for his alleged role in the killings of Daniel de Abreu and Safiro Furtado in 2012.

Callahan: “This rumor, this Aaron Hernandez rumor – which is so juicy, I want to get into it. It is, big.”

Minihane: “It’s certainly something we can play with as the days go on. I’m not sure how comfortable Michele is in talking about it.”

RELATED: Brother of Aaron Hernandez on the life of a murderer

Callahan: “Michele knows the real motive for the murder of Odin Lloyd. And let’s just say that Odin Lloyd caught Aaron Hernandez in a compromising position.”

McPhee: “You could say that Aaron Hernandez was a former tight end before he was kicked off the Patriots.” (Laughs)

Minihane: “Tight end on and off the field as well?”

Callahan: “And then he became a wide receiver.” (Laughs)

Minihane: “So you think he’s comfortable in the prison lifestyle? He’s probably doing well for himself romantically, perhaps?”

McPhee: “Let’s just say that Aaron Hernandez is known to kick with both feet.”

McPhee: “He made the unfortunate move to say that out loud to somebody.”

Update: McPhee penned a piece for Newsweek over the weekend regarding Hernandez’s sex life, and wrote: “One of the notes left by Hernandez was to his prison boyfriend, who is now on 24/7 suicide watch, multiple law enforcement sources confirm. Hernandez’s sexuality would, of course, not be relevant save for the fact that an intimate relationship he allegedly had with a male former high school classmate was at the center of the investigation into Lloyd’s murder.”

There is a facebook page titled “Gay Men for Aaron Hernandez” and the following was posted this past December:

Welcome to all the new supporters of the Gay Men for Aaron Hernandez page. The outpouring of love from Aaron’s gay supporters is inspiring.

Please send Aaron a Christmas card and let him know we all support him in his struggle to accept his gay sexuality. AARON WOULD LOVE TO HEAR FROM YOU: – Aaron Hernandez # W106228 Souza-Baranowski Correctional Center P.O. Box 8000 Shirley, MA 01464