Is being satisfied with an answer actually more important than hearing a truth that is too hard to swallow? At what lengths should we go toward self-preservation or censorship to silence parody or critique of societal norms? These are some of the larger questions posed in Umberto Eco’s classic novel “The Name of the Rose.” The novel, originally released in 1980, has sold over 50 million copies worldwide and has been adapted into an eight-part limited series premiering tonight on SundanceTV with actor John Turturro as its lead.

“Any time you can figure out who you are or what you are, it’s empowering. Because you don’t look at yourself the same way.” – John turturro 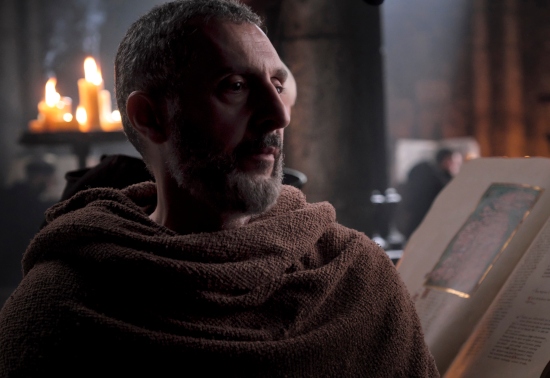 John Turturro in The Name of the Rose. Photo: SundanceTV

The story is set in Italy in 1937 as William of Baskerville (Turturro), a Franciscan Monk, travels with his novice Adso von Melk to a secluded monastery in the Alps. The purpose of their visit is a theological disputation surrounding heresy and Aristotle’s a mysterious and controversial book. While William and von Melk are at the monastery, they get caught in the middle of a series of murders and begin to learn many of the dark secrets many of the monks had been trying to keep hidden.

“The Name of the Rose” was shot on location in Italy and directed by Italian director Giacomo Battiato. When Battiato approached Turturro to play the part of William, Turturro was intrigued but felt as though he needed to lend his talents to the writing room as well to make sure that the story’s timeless themes of resistance under puritanical rule would make their way onto the screen.

“My interest, why I started working on the script with Giacomo Battiato, was to put as much of Eco as we could into the series because I didn’t really want to do a watered-down version,” says Turturro. “It’s a murder mystery but it has all of these important elements like how could a man be a man of faith, like William, and be a man of science? He’s a philosopher, but he’s a man of action. He was an inquisitor, but he’s a person who renounces violence. He values women even though he’s amongst all of these men who fear women and demonize them. I thought the most interesting thing in the whole book was this understanding that the power of knowledge of what he says [takes] the form of the ‘antichrist,’ which is any form of absolutism. I thought these things are wonderful and we could get them in if we had more than two-and-a-half hours to do it.”

“The Name of the Rose” also stars Michael Emerson as the monastery abbot and Rupert Everett as the chilling inquisitor Bernard Gui. It takes viewers on a chilling and winding mystery that poses questions that are still relevant given the recent shifts toward authoritarian politics in many of the world’s leading societies.

“We’ve seen it not just today, but throughout history,” explains Turturro. “When any sort of fanaticism, or fascism, absolutism or totalitarian regime comes in, they attack intellectuals. They attack the library. They burn books. Knowledge is such a powerful tool. It’s a powerful tool for a poor person to improve their lot in life.”

And that is exactly what that kind of censorship and persecution is meant to do: keep a certain demographic oppressed in order to rule with ease.

“That fear that you see in a very, maybe, a more primitive way is still paramount in many cultures and societies today, in subtle ways,” says Turturro. “I love when you go back 1,000 years and you are exactly where you are right now. Because I think that teaches you that people aren’t inventing this stuff. It has a long line in it. Any time you can figure out who you are or what you are, it’s empowering. Because you don’t look at yourself the same way. You can say, ‘I’m all of these things, I’m not one thing.’ We all have our strengths and weaknesses, but these themes are universal themes. I think he was very smart, Eco, to put it into a murder mystery that really revolves around the protection of a book not being released into the public consciousness, or a way of thinking into the public consciousness. You can go right from Aristotle’s ‘Poetics’ to ‘Saturday Night Live’ if you want to [laughs].”

The Name of the Rose starring John Turturro premieres tonight on SundanceTV at 10 p.m. ET.  Check out the trailer below.