As the saying goes, we live in the land of hopes and dreams. That slogan practically rolls off the tongue and fits into song lyrics just as easily as cliches about changing seasons. But somewhere along the way, that faith in American mobility seemed to get lost in the shuffle. Nowadays, people have a harder time making ends meet and crossing over into a higher economic status than ever before. To make things worse, predatory multi-layered marketing companies — or should I say, pyramid schemes — have consistently appeared to take advantage of those down on their luck looking to change their lives as quickly as possible. The new Showtime series, “On Becoming a God in Central Florida,” starring Kirsten Dunst, follows a defiant and determined single mother and water park employee named Krystal Stubbs who is looking to get revenge on a pyramid scheme known as Founders American Merchandise that drained her family of their finances and drove her husband (Alexander Skarsgard) to his early demise.  I caught up with Dunst to talk about the hilarious new show and getting to play the role of a lifetime as Krystal Stubbs.

“I always want to do things that are outside the box and different so this was something I knew that I’d want to see a show like this,” – Kirsten Dunst 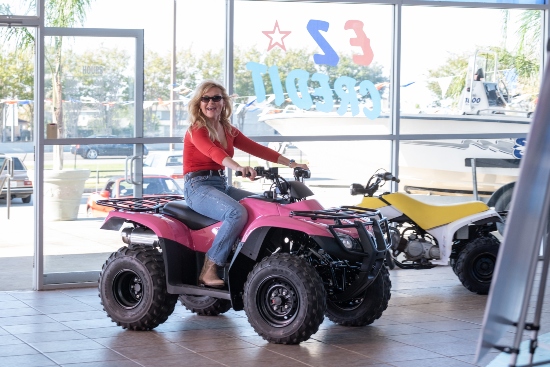 Kirsten Dunst in “On Becoming A God in Central Florida”. Photo: Showtime

It’s been a long time since I’ve started a show and instantly recognized that the main character was going to be instantly someone I was going to root for. I feel like Krystal Stubbs is certainly one of those. What initially drew you to this role and this project?

Kirsten Dunst: Well when I read it, after doing “Fargo,” I feel like people watch TV so much more now. So, I wasn’t sure if I was going to do more TV, but this was the best pilot I read. It was so good. It was just so well written and so unique compared to anything else I’d seen. I always want to do things that are outside the box and different so this was something I knew that I’d want to see a show like this.

Was “Fargo” a big turning point in the kind of characters you look for these days? Does the slow build of television appeal to you more than film lately?

Kirsten Dunst: I guess you can just build over a longer period of time, which is a lot more work in the long run, but  I think it’s more gratifying for audiences these days. I just knew wherever she was going in the story would be interesting to play and a real struggle and something that would be entertaining to watch as well. And funny, too! It had everything I like. I like dark comedies and satire. I just knew it would be a joy for me to do.

The show revolves around a predatory multi-level marketing system (pyramid scheme) known as Founders American Merchandise. Did working on this show make you sympathize more with people who have been tricked into believing they can get rich with these kinds of schemes?

Kirsten Dunst: I mean it’s terrible because it’s always lower-income people who can’t live off of minimum wage. It just feeds off of people that are in hard situations. It’s really depressing. I remember watching the Herbalife documentary [“Betting on Zero”] and it’s so hard to watch these poor people or immigrants or people who put all of their money into these things hoping that they can give a better life to their families. We delve into all of that in this series as well.

There is this big turning point where Krystal seems to say, “I’m not going to be a sucker anymore,” and she starts working for Founders with hopes to take it down from the inside. Was that righteous revenge story something that excites you about the role?

Kirsten Dunst: Totally! Whenever they explained to me what Krystal was going to do, it seemed like a fun journey. It’s like taking down the man! Even though she’s not in the position to, she’s just doing everything she can to manipulate and get herself into that world so that she can get her life back. But also, it’s kind of her only option at the time. She just has the water park job. She’s a good people person and showman. If we get a second season, I feel like Krystal is going to become a really powerful force on her own and probably become what she hates as well.

Make sure to catch “On Becoming a God in Central Florida” Sundays at 10 p.m. on Showtime.