Lamb of God on 15 years of their breakthrough album, ‘Ashes of the Wake’ - Metro US
Entertainment

Lamb of God on 15 years of their breakthrough album, ‘Ashes of the Wake’ The early 2000s were a strange time. Now that time has provided a little bit of blasting distance, it seems like an era that so many people would like to forget is getting a bit of resurgence of the reigning fashion and musical trends of the day. As we are seeing aspects of that time making a comeback like boy bands and JNCO jeans, it’s also refreshing to be reminded of anniversaries of artists who released some of their best work during that culturally vacant stretch after the Y2K hysteria.

If you were a fan of popular heavy music in 2004, it probably means that you are now shuddering at the thought of muddy drop-tuned guitar riffs with DJ scratch tracks cutting in between weak shout-raps. Ah, yes. It was the heyday of Nu-Metal. But in 2004, we also saw the release of another landmark record by a metal band that has only grown in size as well as critical praise during that time period. It has now been 15 years since Virginia’s thrash-meets-hardcore band Lamb of God has released their crushing fourth album, “Ashes of the Wake,” on Epic Records, and since then it has only grown more influential and cemented the band as one of the genre’s true torchbearers.

“It goes down in history as being called ‘the new wave of American heavy metal.’ We didn’t call it that. We knew by that point that we were a part of something.” – Mark Morton, Lamb of God 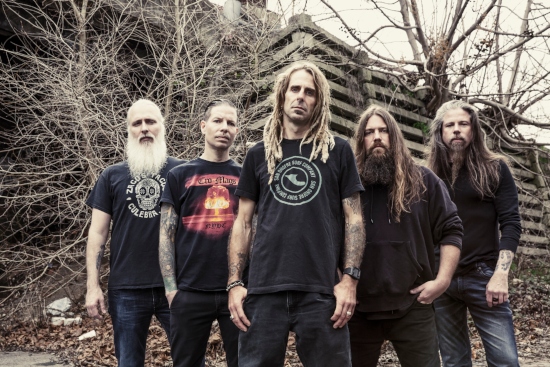 “Looking back, I remember feeling like we were a part of something that was on the up,” remembers guitarist and co-songwriter Mark Morton of being somewhat removed from the rap-metal of the day. “It goes down in history as being called ‘the new wave of American heavy metal.’ We didn’t call it that. We knew by that point that we were a part of something. A scene that was kind of cobbled together by the sort of melding of hardcore and thrash metal bands that started buzzing on its own and the labels sort of tapped into that. But in terms of it displacing anything that was going on, that never really occurred to me, that we were going to knock somebody off the block or rival some other style of music of the day. Because to me, it was all so thriving that a band like us or bands like us were finding themselves on major labels. I remember thinking that it was an amazing opportunity for us to get that sort of level of recognition for that moment and being of the mindset that it was going to be a quick hit and to enjoy this moment while it’s here because we’re not going to last very long. It turned out to be a different story. I don’t think even at that point I had any kind of idea that it would be so long-lived, and that 15 years later we would still be on Epic Records and still have the kind of fan base and visibility that we have.”

The record was a culmination of everything that the band had worked toward up until that point. Morton and guitarist Willie Adler wrote electrifying intertwining guitar parts with bassist John Campbell and drummer Chris Adler setting a breakneck pace. The album comes together with the band’s ever-engaging frontman Randy Blythe and his squall like a howl. The band will be hitting the road for the 15th anniversary of the album, but as Morton revisits it, he feels that even though the record is as strong as it is, the nostalgia might be a factor for many people’s love of it.

“For a lot of people, that was their first exposure to us as a band, or maybe even for that scene,” says Morton. “It did get a big push. ‘Laid to Rest’ was all over MTV, we were on magazines and stuff. It was a big jump in exposure for the band. We were on Ozzfest. I think anytime that you’re first exposed to a band, that record is your favorite record by that band. That has a lot of staying power, and I think for a lot of our fan base, that was the first time they heard us. Music is really powerful. When you listen to something that was a big part of your life at a point in time and you can almost go back there, that’s a really powerful thing. At least it is to me, and I’m sure it is for a lot of people.”

So what does Morton see as the band’s influence on this generation of metal fans?

“I don’t know if I see it that much,” Morton laughs. “I’ve thought about this before: ‘How come no one comes out and sounds just like we do?’ Obviously, we’ve had great success! But there’s no straight-up copycat band. Is there a band that has come out and sounded just like Lamb of God and used that exact model? I don’t think that there is. I’m kind of baffled. Somebody probably should. Listen, kids, it worked!”

Listen to “Ashes of the Wake” by Lamb of God and make sure to catch them on tour.