Electric scooters are could be one step closer to becoming a reality on New York City streets as Council Member Rafael Espinal plans to introduce legislation on Wednesday that would legalize e-scooters and throttle electric bikes.

Electric scooters and throttle electric bikes are currently illegal under city and state traffic rules. (Previously, the city did legalize pedal-assist electric bicycles, which do not go as fast as throttle e-bikes.)

The four bill package, which will be presented by Espinal along with council members Fernando Cabrera, Ydanis Rodriguez and Margaret Chin, would allow for all this electric-powered transportation, which they say will benefit New Yorkers and the city in multiple ways.

These new transit options will provide another choice for commuters during the L train shutdown and as MTA fare hikes loom, Espinal said.

“I think what the fare hikes really underscore is that our transit system is in real crisis and New Yorkers have really shown that they’re hungry for alternatives when it comes to getting around,” he said. “I have always championed alternative forms of transit, especially with the L train shutdown coming up, and I see this as part of a larger effort to get people out of cars, show them that there are other options beside the train and especially help combat climate change.”

Addressing climate change is one of his key priorities, he added, but he said that is “not going to happen unless we electrify our transit and ensure that New Yorkers have alternatives to cars.”

The new legislation will cut those fines to $100 and establishing a DOT program to subsidize the cost of converting these e-bikes into legalized ones with capped speeds of 20 miles per hour. 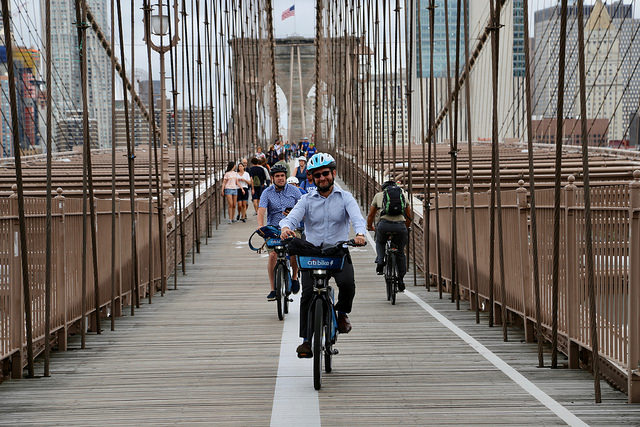 Espinal’s proposed legislation will legalize electric scooters, which have gained popularity around the country through scooter rideshare companies like Bird.

The package will also establish a shared e-scooter pilot program for neighborhoods which are most affected by the L train shutdown and with the least access to bike share programs. Legal electric scooters will be able to go up to 15 miles per hour.

Paul Steely White, director of Safety Policy and Advocacy at Bird, said in a statement that the company is excited about the proposed bills.

“[We are] grateful to City Council Speaker Johnson, Transportation Chair Rodriguez, and sponsors Espinal and Cabrera for their vision and leadership on increasing mobility options and expanding transportation access for New Yorkers across the five boroughs,” he said. “Bird created the electric scooter sharing industry and we are excited to bring safe, affordable and sustainable last mile transportation to the Big Apple.”

However, electric scooters are currently illegal under state law, as well. It is not immediately clear how a chance in city legislation would affect that. New York State Department of Transportation did not immediately return a request for comment about the proposed bills, but Seth Stein, a spokesman for New York City Hall, did.

“While e-scooters are illegal under state and city law, the Mayor is committed to innovation as part of his all-of-the-above transportation strategy to get New Yorkers moving again,” he said in an email. “We look forward to reviewing the proposals with an eye toward both transportation innovation and safety on our streets and sidewalks.”