Well, summer just got a little better, ladies and gentlemen. Here comes Quentin Tarantino. For his ninth feature — and possibly his penultimate full-length — the ever-eccentric filmmaker has decided to take on the glory days of 1960s Hollywood and the evils that co-opted the hippy generation of their chance to spread their message in a positive and meaningful way. The film, “Once Upon a Time In Hollywood,” opens today in select theaters and finds Tarantino firing on all of his creative cylinders that made him such a singular voice in modern film.

Like his best work, “Once Upon a Time in Hollywood” is an ensemble affair that follows multiple story lines that intersect in the end. The first is the friendship of TV and film actor Rick Dalton, played by Leonardo DiCaprio, and his longtime friend and stuntman Cliff Booth, played by Brad Pitt. Dalton was once a TV star who tried and failed to leave a successful show to transition into a leading man on film. We catch up with him amidst his slow climb back into relevance as he chases small parts as “heavies” on primetime television. After he has been stripped of his license after getting caught drinking and driving, Booth has transitioned from taking the hits for Dalton to driving him to and from gigs and juicing up his fragile ego.

The two are inseparable friends, and their relationship is one of the best on-screen friendships to grace the silver screen in some time. Both leading actors dig into their roles with such a sense of fun that their camaraderie is nothing short of infectious.

While Dalton is down and out, career-wise, he learns some valuable advice early on to buy property in Hollywood. Tarantino uses this story line to put Dalton as a next-door neighbor to actress Sharon Tate and her famous director husband, Roman Polanski, on Cielo Drive. The narrative device gives Tarantino the poetic license to retell the events of the Manson family attacks on Tate, played by Margot Robbie, and Polanski that fateful night. Without any spoilers or cameo reveals, the film is chock-full of surprises that will be talked about well after its release. 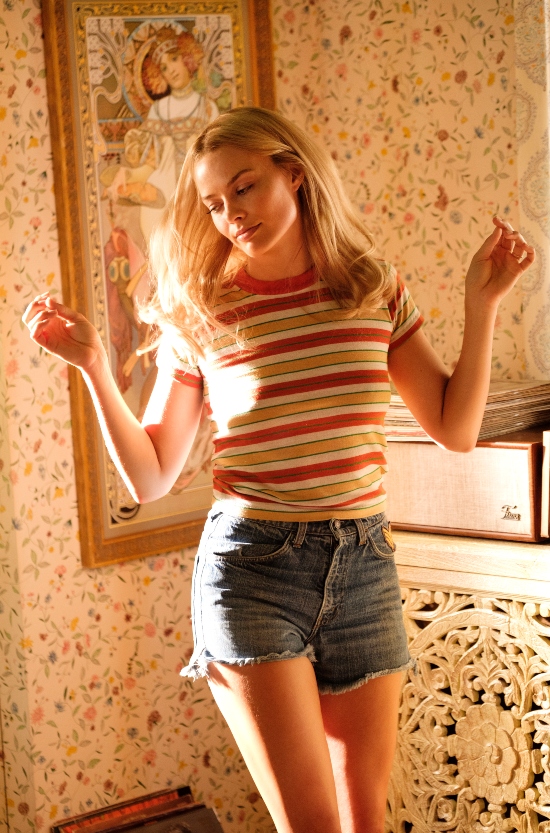 Margot Robbie as Sharon Tate in “Once Upon a Time in Hollywood”. Photo: Andrew Cooper.

With Tate’s story line, Tarantino takes the opportunity to introduce the actress to a new audience that may have only known her from the grim headline. He takes her back from the Manson narrative, showing her as the eager and kind budding starlet that she was. In one scene, she heads to a matinee screening of the Dean Martin-starring action-comedy film, “The Wrecking Crew,” in which she plays the comic relief. After convincing the theater staff that she is who she says she is, she sits down to enjoy while Tarantino chooses not to superimpose Robbie into the film, leaving in footage of the actual slain actress.

Another masterful sequence shows Dalton trying to make an impact as the villain on a big network western show and grappling with his insecurities while the production tries to work around his inner crisis. While Tarantino shows you how a western is made, we also follow Booth as he has a showdown with the Manson family at their adopted Spahn Ranch home. This scene plays beautifully against the other, as the tense meetup on the ranch borrows heavily from the tropes of famous westerns of the day.

When Tarantino hits that narrative spike with a sledgehammer, you can almost picture him enthusiastically pitching his ideas with a crazed look in his eyes to a room full of film executives, acting out dialogue and expanding upon his vision with his motor-powered wit. All of that infectious energy is on full display with “Hollywood” and results in the most all-out fun and well-constructed film the director has made in years.

Watch the trailer for Once Upon a Time in Hollywood below…