Tonight marks the return of one of last year’s biggest TV success stories, the beloved FX series “Pose,” which depicts the vibrant ball scene of early 1980s New York City. The show was co-created by Steven Canals along with the creative force of Ryan Murphy and Brad Falchuk, and broke serious ground by being the first show on a large network to have significant trans representation both in front of and behind the camera.

“I always tell people, never forget, it was a trans woman who threw the first brick at Stonewall. I don’t think a lot of people know that,” Ryan Murphy, co-creator of Pose 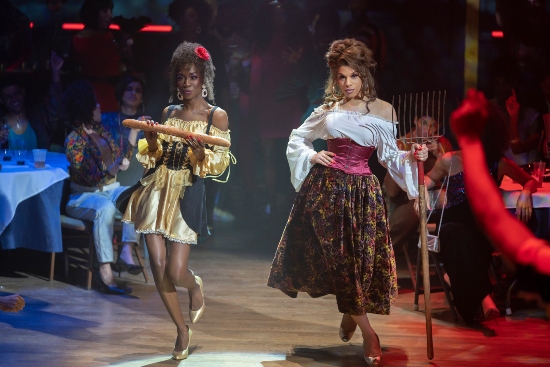 The second season will make a time jump and find the characters at the start of a new decade, in 1990, right as Madonna’s “Vogue” video is bringing the ball scene to a much larger mainstream audience and the AIDS crisis is ravaging the tight-knit community. The series will also pick up where the first season left off, following the show’s main character, Blanca, and her recent HIV diagnosis as she tries to be a good mother to those she takes care of who have been rejected from society and their birth families under her “house.”

Ryan Murphy, one of TV’s great auteurs of the past 20 years, originally wanted to tell the story of the ’80s ball culture after he acquired the rights to do a theatrical retelling of the famous documentary “Paris Is Burning.” But when he read the pilot script by Steven Canals, he knew he had to abandon those plans in order to tell this more fictionalized version. That way, they could cast a wider net over what was happening in the community in those years.

“I love the show so much because it’s a real story to me,” says Murphy. “It’s about a beginning, middle and an end. The last season will be in ’95-’96, when they develop the antiviral drugs that can help fight off HIV. To me, the show has always been about the demolition of a community that refused to be silenced and stopped. I always found that very moving. The show is very topical because the show is about a group of marginalized people who are saying, ‘I have a right to be heard and I have a voice and I belong, too,’ and I think that we all drank the Kool-Aid after Obama and said, ‘Oh great, we made it!’ As you can see, we didn’t, and a lot of our rights in this community, people are attempting to remove them. In many ways, this community, the ballroom community, were such pioneers for civil rights. I always tell people, never forget, it was a trans woman who threw the first brick at Stonewall. I don’t think a lot of people know that.”

Steven Canals had spent years pitching the initial story idea to TV executives until he got the backing from Murphy and Falchuk. Now, the show has been widely accepted by fans and heralded as a triumphant breakthrough by critics. The importance of telling this story with members of the LGBTQ community actually telling it means more given the obstacles being created by our current political landscape.

“Particularly at this moment, when we have an administration that is constantly targetting the LGBTQ community, I think it is critically important for young queer and trans kids to know that they are loved and respected and their lives matter,” explains Canals. “I think at least what I’m trying to do with ‘Pose’ is to create a safe space, a home for folks to go to where they are seen and where they are seeing their experience reflected back in a positive light.”

Canals is also proud to have created a show where the majority of the writers and actors are approaching the material from their everyday experiences of being trans, rather than having a cis straight person trying to service the material.

“My feeling was, I just don’t buy into the rhetoric [that] there is no LGBTQ talent or, specifically, there’s no trans talent out there,” explains Canals. “There is, and I’m proud to now be able to use my show as a model to say, ‘You’re just not looking hard enough.’ Clearly, you aren’t, because we’ve got a bunch of folks here!”

As the story follows characters like Candy, Blanca and Elektra Abundance as they find space within a spotlight that was never there before, their newfound visibility in mainstream society will be something that they will have to grapple with.

“We all know that visibility is a double-edged sword,” explains activist, bestselling author and current writer, director and producer of “Pose” Janet Mock. “On one end you get to be seen, but that being seen makes you that much more vulnerable as a target. But also exposed in a sense that you can go and have bigger opportunities. So for our characters, a lot of the bigger conversations that happen from episode 1 to episode 6 is that struggle and how they are all so different in their reactions to that. Some of them, it propels them to take greater risks which can have detrimental results. Some of them, it can allow them to reach heights that they never thought they’d be able to reach and actually be a part of that American dream that is the idea of ‘realness.’ The reason why they created this space wasn’t just to create a safe space and to build a family but to also have a piece of what everyone else seemed to have — ‘everyone else’ being cis, white, straight people. They were able to have all of these things but we can’t. So we have to create a fantasy world. But it’s not a fantasy anymore, because it’s possible! So that visibility allows access to that but at the same time, it makes them so much more visible. So what happens to their safe space when those doors start opening and the cameras start coming in?”

Much like the show, the cameras have shown this visibility with such breakout stars such as MJ Rodriguez, Indya Moore and Dominique Jackson, who have become in-demand actresses in the industry when they had trouble finding roles in the past.

“I think that in the year since the show has premiered, I think so many of them, almost all of them, have become so sought-after and successful and recognized in such an amazing way,” marvels Murphy. “You can never tell when that happens, but I’m proud of it. … You can’t walk down the street with them now because they’re all so famous.”