Stephen Merchant enters the ring with ‘Fighting with My Family’ 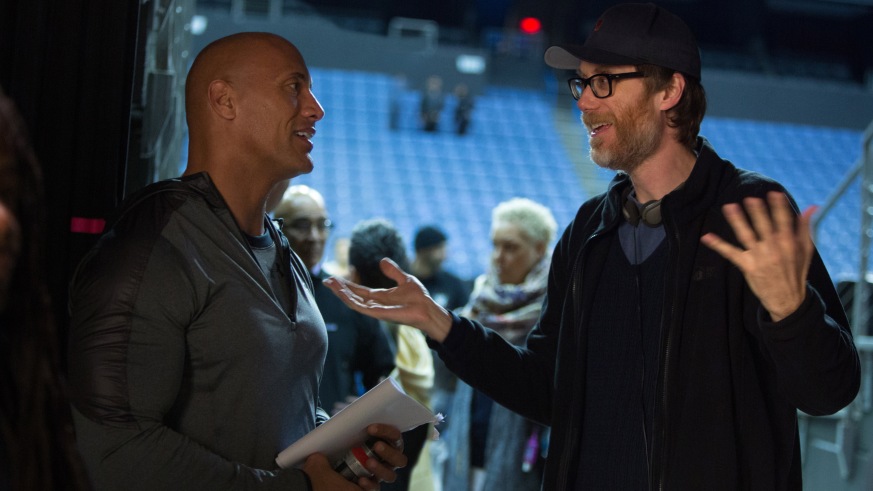 From finding the humor in life at a paper company to squaring off with Marvel mutants, Stephen Merchant has tackled all sorts of characters and worlds over the years. However, the “Logan” star and co-creator of the U.K.’s “The Office” has never been apart of a project quite like “Fighting with My Family.”

While Merchant wasn’t a big wrestling fan growing up across the pond, the English actor and director was instantly captivated by the story of Saraya Bevis, aka WWE icon Paige. When Merchant’s pal Dwayne “The Rock” Johnson came to him with the idea of doing a biopic on her, Merchant jumped at the chance to direct the film.

“Fighting with My Family” stars Florence Pugh as Paige and follows the wrestler’s journey from obscurity in the U.K.’s scene to landing the job of a lifetime with the WWE. While Paige is certainly the focus of the film, her wrestling-obsessed family is also a delightful highlight, played by “Game of Thrones” star Lena Headey and “Shaun of the Dead” actor Nick Frost. Vince Vaughn has a fun role as well, and even “The Rock” gets in on the action, playing himself.

Ahead of “Fighting with My Family’s” wide release this weekend, we chatted with Merchant about the film, working with Paige and “The Rock” and more.

Were you a big wrestling fan before working on this project?

I had never really seen any wrestling. British wrestling used to be on TV in the late ’70s and early ’80s. My grandfather used to watch it and I would occasionally wander in and, all it was, was really fat men bumping bellies. That was all British wrestling was. Eventually it left TV and never came back, so I never had any experience with it. I would occasionally watch it with my granddad and had no idea what was going on.

So what made you interested in this film then?

Dwayne – I call him Dwayne – he saw a documentary about this family and about Paige. He was in England filming “Fast & Furious 6,” he saw it on British TV one night when he couldn’t sleep. Coming from a wrestling family,  he responded to it, and ended up becoming involved marginally in her story, and somewhere along the line realized there was a sort of Rocky-style, underdog story there. And I worked with Dwayne before on “Tooth Fairy,” and I guess we hit it off then, and it made its way to me. Thankfully I guess they felt like I was a good fit for the tone they were after and here we are, really.

Do you feel that, by not being a WWE superfan, you brought a helpful perspective to the story?

I wanted it to appeal to both the fan and the non-fan. It was important to me that it would make sense if you weren’t a wrestling aficionado. I think, in that regard, not knowing about it was good because it meant that I had to learn what was important for the story. If you were a die-hard fan, you might be too precious about getting every detail right, whereas I knew I had to work in broader brush strokes for the non-wrestling fan. I always think about my mom. Would she understand it? she doesn’t even know who The Rock is, and I’ve worked with him. So I think it was a useful approach.

And Dwayne was very helpful. He took me to WrestleMania and we met Vince McMahon. Vince had to give his sign of approval.We met, it was the night before WrestleMania in Dallas. It was midnight and he was just eating a steak. Nothing else. No vegetables, no fries, just a steak. That’s what I expect from this kind of guy. So the most useful thing I learned was that idea of going over to the fans and that being something that’s important to her victory in a way, is whether the fans appreciate or kind of go for what she’s doing. I think it was useful not knowing, but I certainly had to catch up very quickly. Someone described it to me as being soap opera in spandex. That made sense to me.

Paige has been a groundbreaking figure for women in wrestling. Considering everything going on in the world, how important is it to celebrate her story within today’s context?

I think it’s taken on greater significance since we began the project. When we began whatever it was, three years ago, that whole kind of Divas Revolution was just blossoming, again something that I had to catch up on. For me, it’s not just about celebrating the empowerment of her as a woman but also as a working class woman, certainly from the U.K. perspective, an uncelebrated working class woman. It’s interesting because in the U.K., there is a snobbery towards what she does. She’s not being written about in the mainstream media and the broad sheets, and celebrated. It’s funny because newspapers like The Guardian are always searching around for British women to celebrate the success of, and rightly so when they find a Claire Foy or whoever, and they rightly deserve the success and attention that they get. But it’s interesting that there’s this other corner of entertainment that’s not really being looked at. So that was important to me and exciting to me.

I think also just because she’s succeeded as have her contemporaries in what was traditionally known as a very masculine world. When I did my research, there were people that told me that, for many years, the women’s matches were seen as kind of the bathroom break. Certain members of the audience would go off and get a drink at the bar while the women’s matches were on, waiting for the next dude match. The fact that seems to have changed and that some people regard the women’s stuff as almost as exciting if not more so than the men’s stuff, I think is great and a testament to her and the other women she came up with.

What made Florence Pugh such a perfect fit to play Paige?

It was very tough to find someone because I had in my head the real Paige, and at some point my casting director said, “Well look, I don’t think we’re going to find someone who’s exactly like Paige, she’s kind of unique. Let’s find someone who will do their own interpretation of who she is.” So we needed someone who was willing to do the wrestling and train to do that, who had the acting ability to carry the movie, and have the charisma that you believe that she could become a superstar. Paige if nothing else, is very charismatic and compelling. I saw maybe 60 young actresses either on tape or in person. Florence in the end, she came back multiple times, auditioned with me, auditioned with Jack [Lowden], who played her brother.

In the end, she just won the day. I was just so impressed by her. I mean the fourth day of shooting was that big WWE Monday Night Raw match, which we shot at the Staples Center in L.A. She had to come out after like a month of training and recreate that match. She said at one point, she was lying on the mat and saw one 8-year-old boy screaming,” You suck!” And the real Paige was saying, “Well, that’s pretty much what it’s like when you’re a wrestler.”

“Fighting with My Family” is now in select theaters and opens nationwide Feb. 22.