The 2018 Holiday Train Show adds ferries and One World Trade

Each holiday season, a literal urban jungle springs up in the Bronx with the annual Holiday Train Show at the New York Botanical Garden. Hundreds of feet of track wind through a landscape of New York City’s neighborhoods recreated in vines, twigs, bark, seeds, moss and more, and this year Lower Manhattan is taking the spotlight.

“On one hand it’s a holiday tradition for visitors, who bring their family and friends from out of town, but we also try to add new buildings each year,” says Karen Daubmann, associate vice president for exhibitions and public engagement at the New York Botanical Garden. 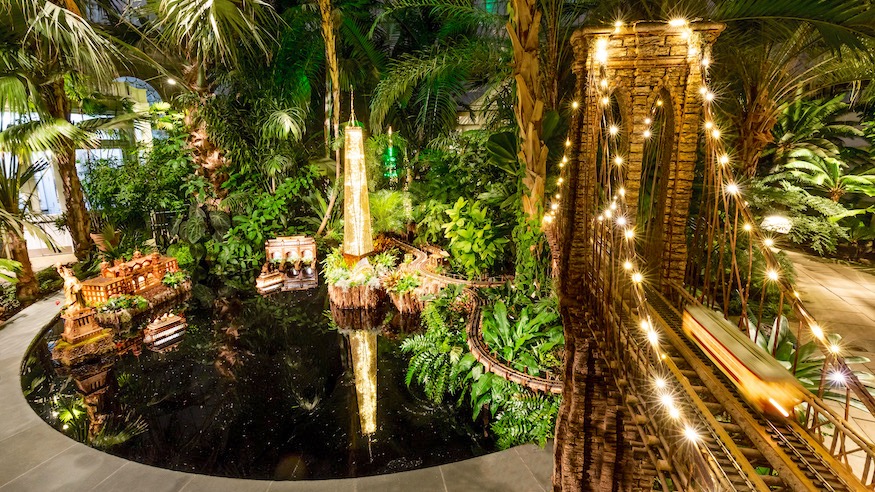 Now in its 27th year, the Holiday Train Show takes over the Enid A. Haupt Conservatory from Saturday, Nov. 17 through Jan. 21, 2019 with creations by the botanical artists at Applied Imagination. Among the new additions are the historic Battery Maritime Building, the Battery Park Control House (better known these days as the Bowling Green subway station), the Woolworth Building, the Oculus, Chelsea’s Terminal Warehouse and, most notably, One World Trade: Made of twigs criss-crossing through glassworks, “it’s much more organic than you expect it to be; it is tall and it just glows.”

These new additions join the neighborhood’s existing icons, the Statue of Liberty and Ellis Island replicas, to become part of the collection of over 175 NYC buildings and landmarks. “We’ve really focused on historic buildings in the past, so we thought it was time to add One World Trade to the mix,” says Daubmann. “The skills of Applied Imagination have really grown in the 26 years we’ve now worked with them, and they were able to do a really modern building for us.”

But it’s not a building that has Daubmann most excited. Though the Holiday Train Show has had botanical airplanes and trains before, this year’s addition of two vintage ferry boats from the early 1900s is the first nautical feature.

“This is my 12th Holiday Train Show and I was desperate to do ferry boats,” she says. Not having the Staten Island Ferry, “one of the most iconic ways to see that part of the city,” felt like something was missing from the exhibit. “We have so many beautiful water features within the train show, we thought for sure we should add some ferry boats.” 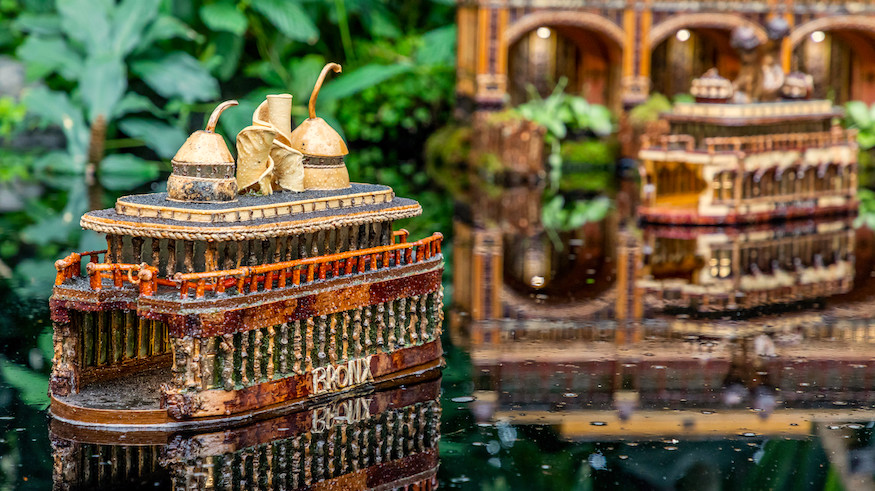 Throughout the exhibit, special nights with live music and dancing, food tastings and the popular 21+ Bar Car Nights with entertainment cocktails are also back, with the new Bronx Night Market popping up serving neighborhood bites. Then starting Dec. 29, Thomas the Tank Engine returns for even more train fun.

Besides adding new buildings each year, classic ones are also upgraded given the natural decay that happens. Last year, the Empire State Building and Chrysler Building were among the ones that got a spruce (so to speak). So even if you’ve seen the show before, it changes a little every year — just like the real New York City.