The art of finding ‘Lost Gold’ with Jesse and Josh Feldman Jesse and Josh Feldman have been hunting for buried treasures and lost gold mines in the American West for their entire lives. With their new show “Lost Gold” premiering on Travel Channel on Jan. 14, they will be taking viewers deep down into some of the most fabled regions of the country in order to unearth some of the most legendary and storied lost treasures of all time. We sat down with the Feldman brothers to see how they got started in treasure hunting and what hidden jewels still keep them up at night.

Hunting for treasure with Jesse and Josh Feldman 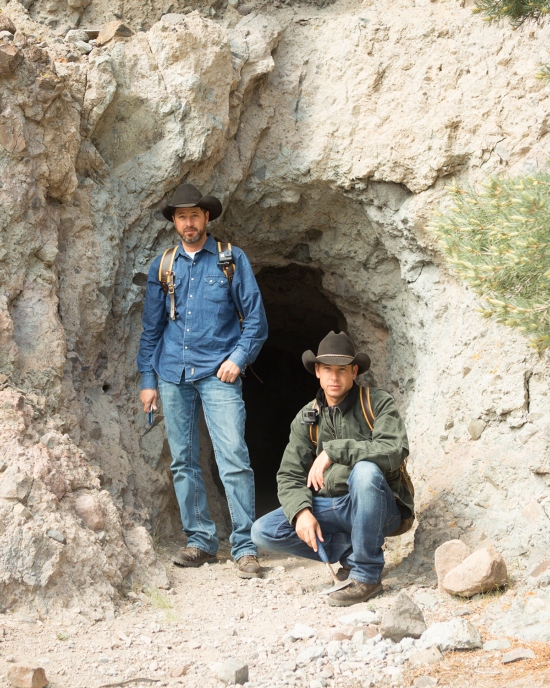 What was your initial fascination with finding buried treasure?

Josh Feldman: We grew up in it! Our dad is a treasure hunter. When he was a kid, he would read about the Lost Dutchman Gold Mine in Arizona and dreamed of going there. He started a family and when we got old enough he would take us out on treasure hunts. Listen, when you’re a little kid and you get asked to go treasure hunting, you’re not going to say no to that. That’s exciting! So we just kept doing it. We never grew out of it, I guess. We’ve been all over the West hunting treasures. Arizona, Nevada, Colorado, California, and a lot of other places with our Dad. We’ve continued that tradition.

Did you ever have that feeling growing up where you wished you were doing other activities with children your age that didn’t involve hunting treasure? Like playing baseball or something?

Jesse Feldman: There was never that feeling of “I don’t want to do this” like if you were forced to play a sport like that. Treasure hunting is not a sport like that. It’s going out into the wilderness, it’s meeting new people, it’s tracking down history, with the hopes of sometimes you do find something in the field that can change history. There are treasures out there that are real. There are thousands and thousands of treasure hunters out there just alone in the West that are still out there just hidden. I think that in today’s world, modern society doesn’t think about the 1800s and the things that were lost back then. We just grew up in that culture and it’s what we like to do.

Josh Feldman: Sometimes Dad would pull us out of school to go treasure hunting. When you’re a kid you’re like “I don’t have to go to school today?” It was as if he was insisting. I was like “Great! No school and we get to go treasure hunting?” You can’t beat that. Not that I’m advocating for not going to school, by the way, Pat (laughs).

What was the biggest find for you that really made you think to yourselves “this is why we do this”?

Jesse Feldman: The Lost Dutchman, the lost gold mine, is right out our backyard. That’s what Dad came to Arizona to search for. At the end of 25-30 years of his searching, we put together the history and found what we believe is the Lost Dutchman Mine out in the wilderness. We wrote books on it. We documented the history and documented the mines. For us, that was the biggest find.

Josh Feldman: The Dutchman was the biggest find in our lives. That’s important to us. Just putting the history together alone is very important because history does become lost if you don’t go back and research it and really put it back together and pinpoint it. That’s what we were able to do.

But also, we have some gold mines out here in Arizona. For me, just following the vein and hitting these pockets along the vein with gold in it is incredible. When you make that discovery and you’re in the mine and you’re following the vein and boom — Here’s a spot that’s a blowout in the vein that’s just chock full of gold. Maybe you’re not going to be a millionaire because there isn’t that much gold in it. But when you can see it visibly just sitting in the rock just the way nature put it there. There’s nothing better than that. Nobody’s ever seen that until you did.

What is a buried treasure that keeps you guys up at night?

Josh Feldman: All of them!

Jesse Feldman: There’s so many of them. You do your research on them and there are some treasures that may not exist. You track down the research and you go “well, this was already found” or “this was never a true story in the first place.” So you have to look at treasure stories with a keen eye and you have to vet these treasure stories. There are so many out there where the history has been changed to a point where nobody knows the truth anymore. Or authors would rather print the legend than the truth because they think that the legend is more interesting. So, history gets changed over time and it’s our job to unscramble all of that and see where that puts us in the field. There is a lot of work that goes into that because you can’t go out into the field without your research. You have to do that first. It’s key and the most important thing to do.

Josh Feldman: What keeps me up is that we’ll get focused on a specific story and when we’re in the middle of that whatever we are hunting keeps me up at night. I get into it. I’m like a bulldog. I wonder “well, what happened here and why did that happen… if it happened?!?” I believe that there is truth in every legend. I don’t know how much. But that’s what we want to find out. It’s that puzzle that just keeps me going and keeps me thinking. When I say “all of them”, that’ what I mean by that statement. It depends on which one we’re hunting!

I will say this, a treasure that we have never hunted and I’ve always wanted to is getting into the 1715 fleets. There are ships that are still lost from that fleet that has been undiscovered. They are worth millions of dollars in treasure down there.