The Most Disturbing Urban Legend From Every State in America Urban legends are spooky, modern folklore often used as cautionary tales or to explain random events (and more often the case, for entertainment). Told all across the United States, these legends often feature monsters and mysteries deeply entwined with the histories of their hometowns.

Here’s what’s keeping Americans awake state by state, all across the country.

Visit Oxford, Alabama to shop at Old Mill Mall, see its famous 67-mile walking track, or literally go to hell. It’s just a short drive down the Boiling Springs Road Bridge. Stop in the middle, look behind you and you’ll see the doorway to Hades right through your rear-view mirror. Back your car in and you won’t be able to drive out again.

Alaska! Come for the freezing cold, stay for the wereotters. But don’t bother waiting for the full moon. Also known as Kustaka, these little monsters only come out to help people who are drowning: either by mimicking the voice of a loved one to lull you into drowning faster or by biting you so that you become a wereotter too and swim to safety. You’re welcome? 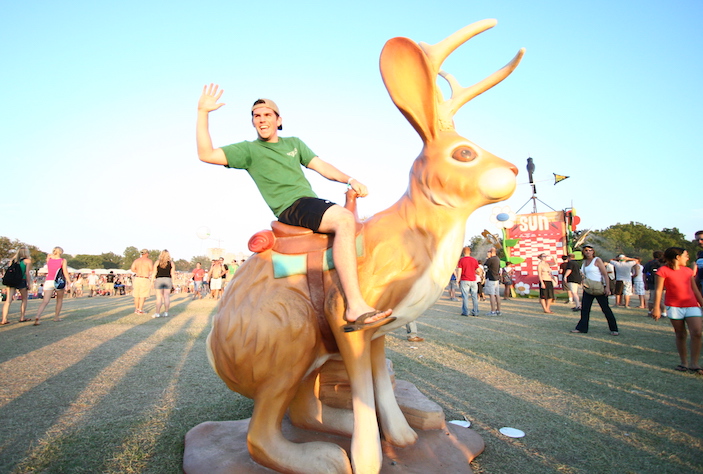 The Jackalope is part jackrabbit, part antelope, and emblazoned all over local souvenirs in Arizona. But if you do decide to hunt the most whimsical game in the southwest, know this: Jackalope milk may be a highly prized aphrodisiac, but Jackalope are quick, and their horns are sharp.

If you smell something horrible while in the woods of Miller County, Arkansas, try to be polite. This urban legend isn’t just a 7-foot-tall shaggy skunk ape, he’s the star of the 1971 classic Legend of Boggy Creek (and the four sequels that followed). But before you ask for an autograph, snap a picture first. You’ll be the first person to catch him on film since the 1970s.

The Ghosts at the Roosevelt Hotel

You’ve missed your chance to see Marilyn Monroe on the red carpet, but you can still be haunted by her at the Hollywood Roosevelt Hotel in California. Monroe is frequently spotted in the full-length mirror (vain much?) by her poolside suite. And she’s not the only celebrity who still wants to see and be seen in the afterlife. Ghostly musicians still play their trumpets at night and Montgomery Clift reportedly recites his lines in the hallway.

It really is a #WinterWonderland here at The Stanley! ❄️ pic.twitter.com/ECfbnJ3mRm

Colorado’s Stanley Hotel is so haunted, it scared The Shining right out of Stephen King. If you feel like you too might have a thriller waiting beneath the surface, we suggest that you try a night’s stay. Most guests report witnessing paranormal activity, and while Jack Nicholson won’t be there, The Shining does play 24 hours a day on channel 42.

Fans of architecture and the occult will want to mark the creepily abandoned doll village in the woods of Middlebury, Connecticut. The demonic voices that commanded their architect to build them (then kill himself once he was done) are reportedly still living inside of them. Locals say that you can hear them at night, but as long as you don’t have a background in construction, you should be fine.

The Ghost of Justice Chew

Pilgrimage to Dover, Delaware to visit the ghost of Chief Justice Chew, patron saint of all those afflicted with mildly amusing surnames. On autumn nights, he rises, hell-bent on revenge against the townspeople who tormented him while he was alive, by pretending to sneeze “ah Chew” whenever he passed. Now he has the last laugh and descends on unsuspecting passersby, black robes billowing in the wind, and makes them sneeze… a lot of times in a row. Locals say it’s scarier than it sounds.

The Fountain of Youth

With true stories of face-eating cannibals and attack monkeys with herpes, Florida doesn’t need any more scary stories. Urban legend seekers travel to Florida to visit the Fountain of Youth — and, because this is the state of Disney World — the 15-acre theme park devoted to all things eternal life.

Friends of Anne Rice will want to spend an evening at Atlanta’s Masquerade Night Club, locally famous as the club of choice for actual vampires. Tourists come to soak in the goth vibe and spot the creepy “tall man in black” who roams the building at night. Freak accidents, disembodied screams, and unexplained fires have also been reported there, making many suspect that vampires aren’t the only urban legends haunting the place.

Visit the Hawaiian island of Oahu to meddle in deities’ centuries-old relationship squabbles. No one’s exactly sure what happened between Volcano goddess Pele and her half-man, half-pig ex-lover, Kamapua’a, but now Pele doesn’t allow pork on her side of the island. Try to drive there with it in your car and it will stop in its tracks–until you feed the pork to a passing dog. Now that’s pettiness worth traveling for.

If you’re secretly sure that you’re a long-lost member of House Stark, let the Old Gods guide you to the Idaho Rocky Mountains. Locals there have been reporting very large wolves and “savagery on domesticated animals” for years now. Get eaten by them and unfortunately that means that you’re not a member of a fictional royal family and you have our fictional condolences.

Spot The Murphysboro Mud Monster in Illinois and you’ll be helping close the most-investigated unsolved mystery of the Murphysboro police department. They’ve been on the case of the 7-foot-tall blonde, hairy, muddy monster since it terrorized teen couples on a two-day “we think we saw something outside our window while we were making out” spree back in 1973.

The Spook Lights on Bruick Road

Some fun facts about Fort Wayne, Indiana: For one thing, it’s haunted by spooky lights. Drive along Bruick Road at night and they’ll pop up above the tree line, change colors and sizes, and chase your car for a while until they get bored and wander off. Fort Wayne also has a large number of Burmese restaurants including one that serves great Coconut Noodle Soup. These two facts are unrelated, but both are pretty interesting reasons to visit Fort Wayne.

Uncle Charlie is a great name for a ghost trying to sound un-scary enough to lure the curious into the Iowa woods to look for him at night. And every year, lots of tourists do just that. If you’re prepared to fall for the ruse, pull your phone out and take a picture of the surrounding darkness with flash. Locals say you’ll see the terrifying ghost of Uncle Charlie staring back, very close to where you’re standing.

The Gateway to Hell

All around the United States, there are several opportunities to be literally in hell. In Stull Kansas, you can even camp in their local hell-adjacent cemetery. Spend the night there on Halloween, and head down the stairs of the old demolished church around midnight and you can walk right down into Hades. But you may want to clear several vacation days for the trip. Locals say that it takes anyone who turns around mid-descent weeks to come back up.

Part man, part goat, part sheep, the Pope Lick Monster has goofy DNA but a gruesome reputation in Kentucky. The monster claims his victims by luring them onto the Pope Lick Bridge’s tracks just in time to meet an oncoming train. Sometimes by mimicking a crying baby, other times by jumping out to scare trespassers off of the 80-foot bridge to their deaths below. Locals say that he sometimes even jumps down on cars that drive beneath it, and several tourists have lost their lives in search of him.

We’ve all done something we regret after downing a few hurricanes in the U.S.’s favorite open-container city of New Orleans. And that’s exactly what makes it the natural habitat of the Rougarou. Half man, half wolf, he stalks the streets thirsty for the blood of the misbehaving. If one feeds on you, don’t tell anyone about your wounds or you’ll turn into a Loup-Garou too.

The Maine-est of urban legends, the Specter Moose is a giant, albino ghost moose that attacks hunters in its territory.

The Snallygaster of Frederick County, Maryland, is half-bird, half-reptile, half-octopus, and half-robot. While the math may be confusing, Marylanders say you’ll know him by his metal beak, razor-sharp teeth, and the tentacles he uses when he swoops down to carry you away for dinner.

Love the Bermuda Triangle but hate water? Then come on down to Massachusetts’ Freetown-Fall River State Forest. It’s got orbs of light! Giant snakes! UFOs!!! And dozens of other unexplained events! At least those are some of the otherworldly phenomena that locals have been reporting about this spooky 200-square-mile region for years.

The Singing Sands of Bete Grise

On the south side of the Keweenaw Peninsula in Michigan, there is a beach haunted by a grieving widow. Grab a handful of the sand and you can hear her cry out for the husband she lost as she paced the shore in his memory. Just don’t try to take the sand with you. It only sings at Bete Grise.

Wendigo Psychosis is an actual psychiatric term to describe an intense craving for human flesh. Give in to those cravings while in Minnesota and you could turn into a 15-foot-tall fanged monster who roams the Minnesota woods driven only by the search for people to eat. While it is an opportunity to take your trip to another level and become an urban legend, you should know that Wendigo hunters once frequently roamed the area to hunt these urban legends down.

The Three-Legged Lady of Nash Road

In Bastesville, Mississippi, you can challenge a three-legged lady to a race. Drive to Nash Road, stop at the church, turn off your headlights and honk your horn three times. If you hear a knock on your roof, it’s a sign that the Three-Legged lady is ready to race. But be careful. Not only is she pretty fast for a ghost (it’s probably the extra leg), she plays dirty and has been known to hit your car during the contest.

The Spook Light of Clarks Fork

In the woods of Missouri, a quirky old hermit turned into a quirky old ghost. Now, The Spook Light of Clarks Fork spends his time getting into mild-mannered spectral shenanigans: he “looks” into the windows of local houses and teases local dogs until they flee in terror. Sometimes he just shoots through the woods, screaming and setting the trees on fire. They’re fine the next day.

For the rest of the freakiest urban legends in the United States, like the Montana’s own Loch Ness Monster, visit Fodor’s.