The Billboard Music Awards (BBMAs) were last night, two days after eight students and two teachers lost their lives at the Santa Fe High School shooting in Texas. The 17-year-old suspected gunman has been identified as Dimitrios Pagourtzis. Students from Stoneman Douglas High School, survivors of gun violence themselves, came on stage during the BBMAs to take part in a touching tribute to victims of such tragedy.

According to CNN, there have been 22 shootings on school grounds in 2018 so far. To kick off the BBMAs, host Kelly Clarkson delivered a powerful speech where she called for action.

“And mommas and daddies should be able to send their kids to school, to church, to movie theaters, to clubs, you should be able to live your life without that kind of fear,” she continued. “So we need to do better, we need to do better, we’re failing our children, we’re failing our communities, we’re failing their families. … So instead of a moment of silence, I want to respect them, and honor them. So tonight, y’all, let’s in your community, where you live, your friends, everybody, let’s have a moment of action. Let’s have a moment of change.”

Shawn Mendes performed his song “Youth” alongside students from the Stoneman Douglas High School show choir and Khalid, who wore a t-shirt demanding protection of our nation’s children as opposed to our guns. 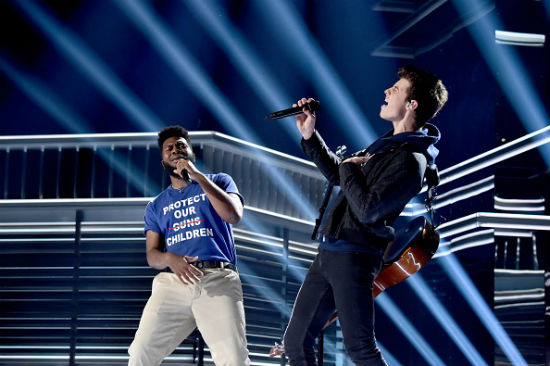 The song’s title was written across the students’ hoodies, perhaps as a reminder that they’ve fallen victim to unspeakable bloodshed at such a young age — the same age of the gunman who killed 17 people at their Parkland, Florida, school on February 14. The hoodies were also, perhaps, a symbol of their collective strength.

On Friday, Stoneman Douglas senior Liz Stout tweeted a video of Santa Fe High School student Dakota Shrader explaining her accounts of the shooting. Stout wrote, “WE SHOULD NOT HAVE THIS IN COMMON.”

WE SHOULD NOT HAVE THIS IN COMMON https://t.co/uRYjm2MhEN

David Hogg, another Stoneman Douglas High School student and activist fighting for gun reform, tweeted the simple yet significant message, “We are fighting for you.”