The Port Authority has listened, and will change the Holland Tunnel decorations so that they make any sense at all
Joe Shlabotnik

Never say that your vote doesn’t count, at least in New York. After a commuter with OCD described the Holland Tunnel decorations as a “nightmare” and launched a Change.org petition to change the position of the wreath over the “N,” the Port Authority held a poll over the weekend to gauge what the New York body politic wanted for the tunnel.

The results? Coming in with over 80 percent of the vote, New Yorkers overwhelmingly preferred moving the Christmas tree from the “N” to the “A,” and removing the circular wreath over the “U” altogether.

“If there were a ladder here today, Rick [Cotton] and I would get up there and move that tree over to the A,” Port Authority Chairman Kevin O’Toole said after announcing the poll’s results. “But we’re told there’s a safety concern right now.”

The effort to change the Holland Tunnel decorations was started by Cory Windelspecht, after making an impassioned argument that, in addition to being “just unsightly,” the bizarre wreath placement would have a negative impact on the 1-3 percent of commuters passing through the area who suffer from Obsessive Compulsive Disorder.

“OCD is characterized by obsessions and compulsions that take up at least an hour a day – but usually longer – and cause significant distress,” Winelsprecht wrote. “For some reason the tree is over the letter N in the word Holland instead of the letter A where it would fit perfectly. This one small thing triggers anyone with the slightest hint of OCD every time they enter the city.” 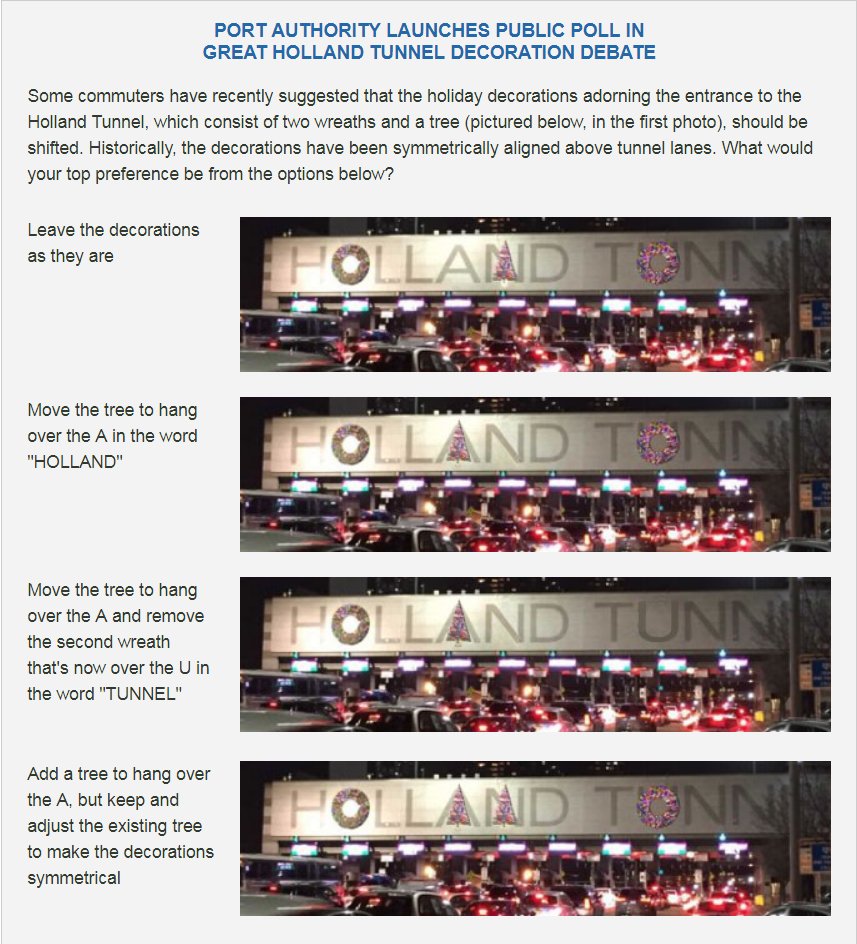 Rather than risk their own lives, the Port Authority will instead shut down one of the Holland Tunnel’s lanes at 10 pm to allow a road crew to safely relocate the festive wreaths. Whether or not this will affect traffic through the tunnel remains to be seen, but such is the price of progress.

Port Authority Chairman Kevin O’Toole and Executive Director Rick Cotton announce that the Holland Tunnel will soon bring more comfort and joy to all who pass through, with the shifting of the Christmas tree over to the A and the removal of the wreath over the U. #HappyHolidays pic.twitter.com/a5NmzsrG3x