The West Wing, what could have been? Season 8 and more, according to Martin Sheen - Metro US
Entertainment

The West Wing, what could have been? Season 8 and more, according to Martin Sheen 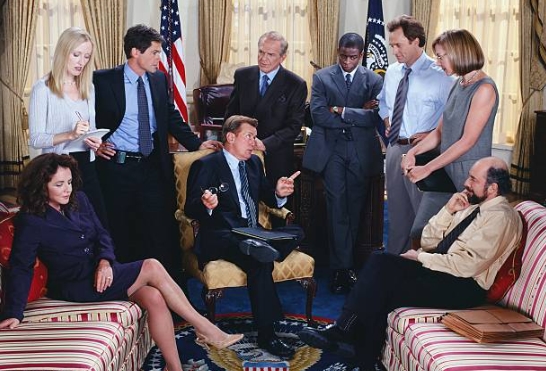 It’s been more than 10 years since the critically acclaimed NBC drama The West Wing went off the air, and in the tradition of so many pieces of recent nostalgia reemerging in American culture, the Netflix generation has made The West Wing popular again.

Martin Sheen, who played President Josiah Bartlet for seven seasons, appeared on The West Wing Weekly, a podcast hosted by Joshua Malina (Will Bailey on the show) and Hrishikesh Hirway this week. Sheen has been the show’s most anticipated guest, as through four seasons of the podcast nearly every actor from Allison Janney (C.J. Cregg) to Bradley Whitford (Josh Lyman) to Rob Lowe (Sam Seaborn) has appeared.

Rumors seem to surface every few years that Aaron Sorkin might bring the gang back together — like Will and Grace, Arrested Development, Full House and dozens of others shows have done in recent years. Though there is no concrete evidence that a West Wing revival will ever happen, Sorkin has said on record if he had an idea he would write it.

But according to Sheen, the series almost continued for an eighth season and potentially beyond.

“In the last season before John Spencer [Leo McGarry] died, god rest him, there was a lot of talk about us going to another network after we finished the seventh season at NBC,” Sheen said on the podcast.

About midway through what would be the series’ final stanza, Spencer died of a heart attack, as did his character on the show. The tide turned in the election between Democrat Matthews Santos and Republican Arnold Vinick with, spoiler alert, Santos winning. And then of course the show closed its curtains.

But what if Spencer hadn’t passed at that critical time?

“If we went on the Republican was supopsed to win, Alan Alda was supposed to win and I would be given a portfolio as a former president and I would be in the image of Jimmy Carter,” Sheen said. “I would be involved in third world elections and aid and so forth.”

The thoughts of what could have been are unavoidable. Sure, the show’s quality dropped off after Sorkin left the series at the conclusion of Season 4. But the show remained popular and, by non-Sorkin standards pretty good during its final few seasons. A series surrounding a Vinick adminstration — a moderate, liberal Republican with populist sensibilities — would have been a very powerful and influentional image during the highly partisan Barack Obama era.