These 9/11 memorials honor the victims and resilience of NYC

Sept. 11, 2001 remains the darkest day in New York City history, the day that two terrorist attacks brought down the twin towers of the World Trade Center. The anniversary is commemorated each year with ceremonies all over the five boroughs like the spectacular Tribute in Light, as well as year-round reminders in the form of 9/11 memorial sites that honor the sacrifices of that day, as well as the resilient spirit of New Yorkers.

Where to find 9/11 memorial sites in New York City

The former site of the World Trade Center towers is now a somber public plaza, with two dramatic waterfalls built into the foundations of the towers ringed by marble walls engraved with the names of all the victims. At a 9/11 memorial ceremony each year, their names are also read aloud, including moments of silence when the planes struck each tower, and when the towers fell. 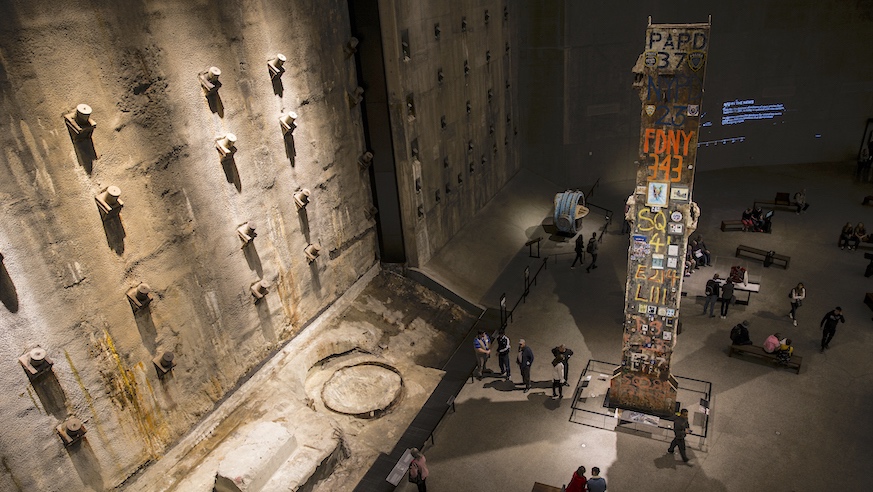 Visitors journey right into the bedrock of Manhattan at the acclaimed 9/11 Memorial & Museum. The collection features salvaged beams and columns from the towers, personal effects of the victims and other artifacts. Along with the permanent displays, the museum features rotating exhibitions; currently, you can see Comeback Season, about how sports helped console and unite not just the city but the entire country right after the attacks. 180 Greenwich St.

In time for the 17th anniversary of the September 11th attacks, Brazilian street artist Eduardo Kobra gifted the city with an eight-story mural dedicated to the emergency workers who responded to the World Trade Center site. The Braves of 9/11 shows a firefighter kneeling with their head bowed, showing both the immediate emotional and physical toll of the attacks — of the 2,977 people killed, 412 were first responders — and the long-term exhaustion of search and rescue. Many emergency workers continue to struggle with medical issues from breathing the toxic air at the site. 780 Third Ave. near 49th Street in Midtown 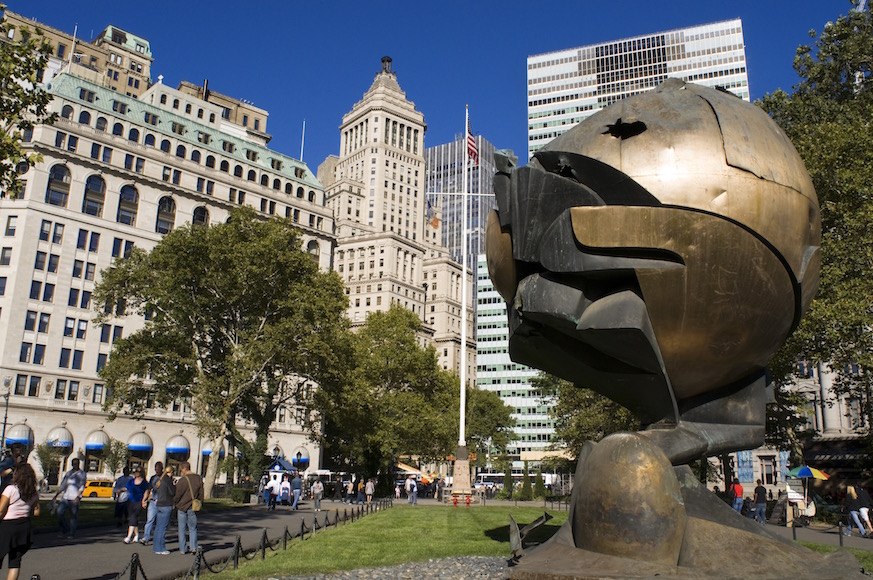 The one-acre Liberty Park that overlooks the former Trade Center site is home to The Sphere, an abstract bronze sculpture of the globe created by Fritz Koenig. Originally located in World Trade Center Plaza, The Sphere was the only piece of artwork to survive from the towers. 155 Cedar St. 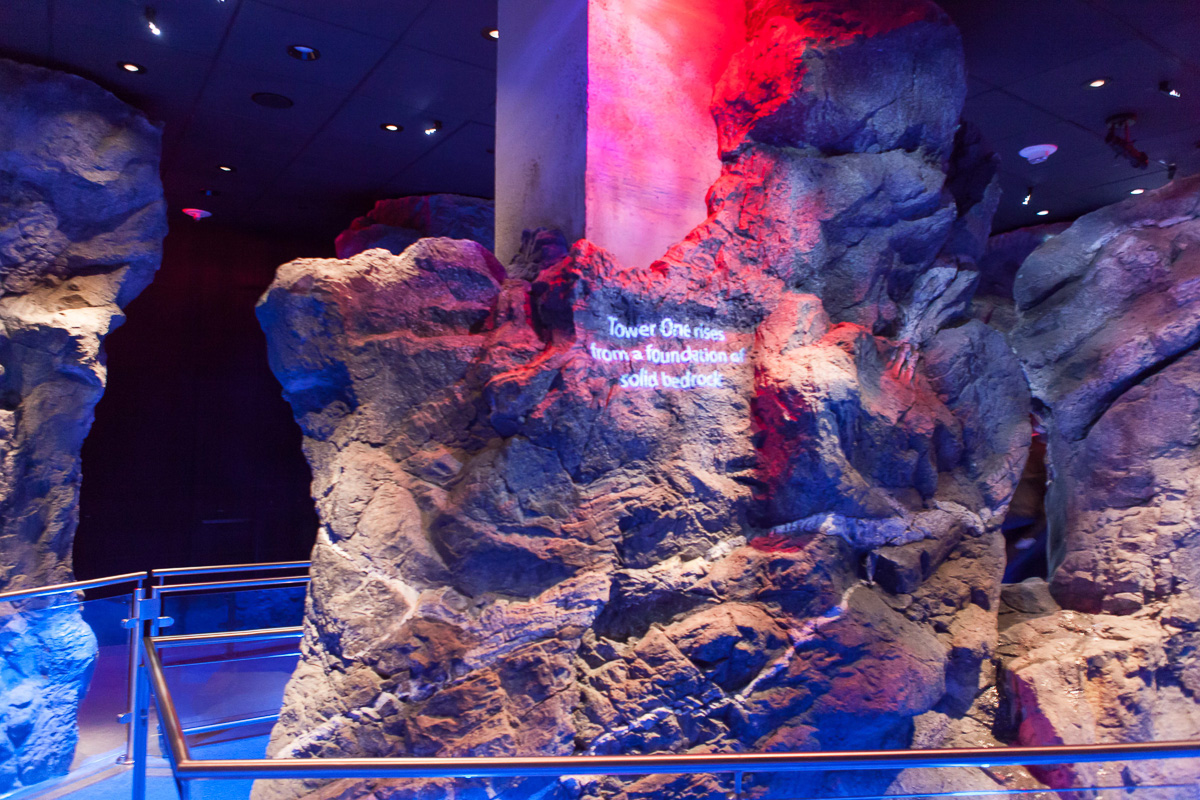 While the World Trade Center towers were not rebuilt, in their place rose One World Trade, opened in November 2014 as New York City’s tallest building, outpacing both of the original towers. The tower is home to One World Observatory, a glass-walled attraction taking visitors 99 stories above the city — but your visit begins in the basement, which contains a tribute to Lower Manhattan’s ongoing reconstruction. 1 World Trade 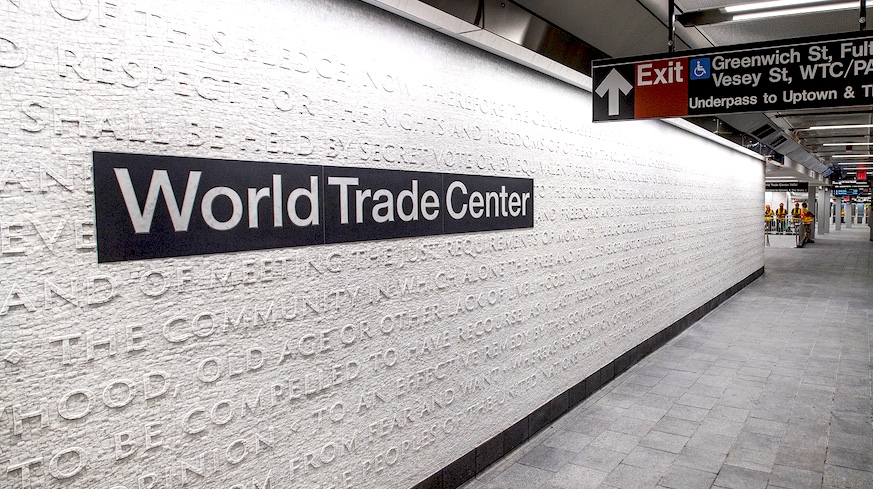 The final New York City subway station heavily damaged on Sept. 11, 2001 has finally reopened on the 1 line. The Cortlandt Street station has been renamed WTC/Cortlandt, and the walls on both platforms are huge marble mosaics created by Ann Hamilton, engraved with words from the Declaration of Independence and the United Nations’ Declaration of Human Rights. Church Street at Cortlandt Street 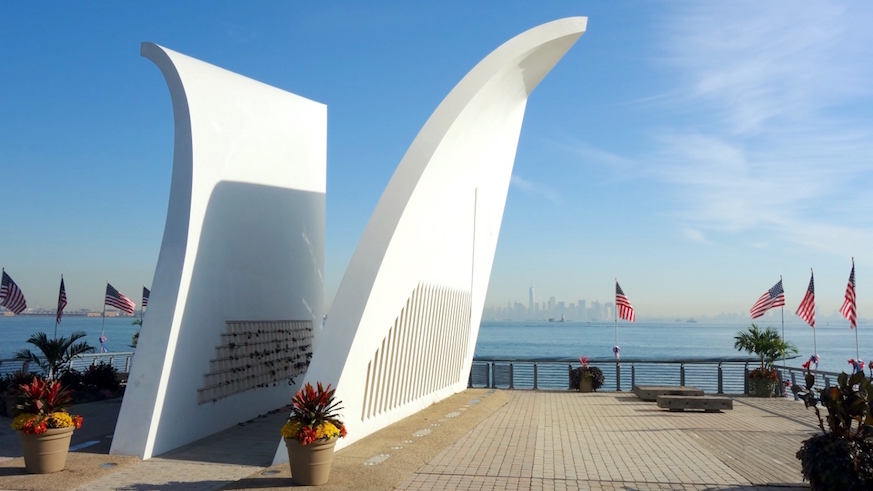 On the shores of Staten Island looking toward where the towers once stood are Masayuki Sono’s Postcards, two wind-bend white walls dedicated to the 274 Staten Islanders killed in the Sept. 11, 2001 attacks and the 1993 World Trade Center bombing. Each victim’s portrait is engraved on a marble “postcard” in the base of the 9/11 memorial statues, located on the North Shore Waterfront Esplanade near the ferry terminal.

A bronze 9/11 memorial to the Brooklyn residents who perished that day sits on the American Veterans Memorial Pier in Bay Ridge. The 25-foot-tall sculpture called Beacon is a representation of a speaking trumpet that used to function as a siren as firefighters were responding to a call, and was dedicated in 2005. Bay Ridge Avenue at Shore Road 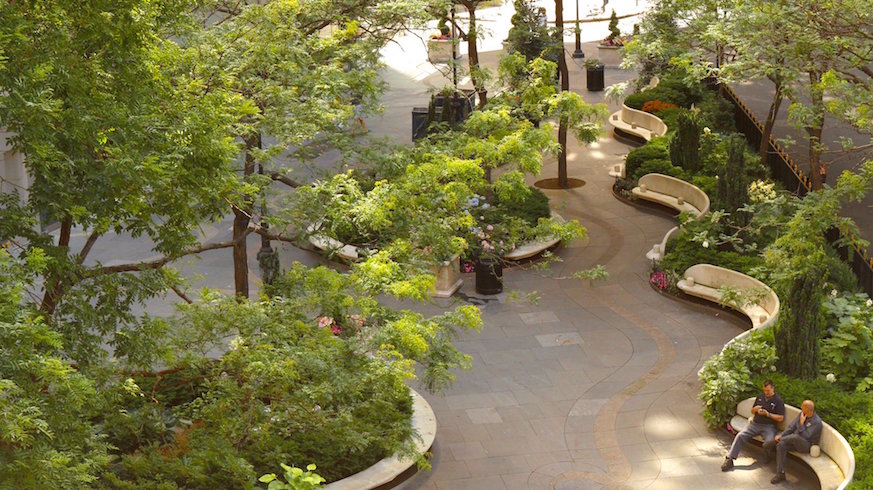 Over on the east side of Lower Manhattan, the Queen Elizabeth II Sept. 11 Memorial Garden at Hanover Square and Pearl Street honors the 67 citizens of the British Commonwealth who were killed in the World Trade Center attacks. During warmer seasons, the 9/11 memorial garden overflows with flowering trees and shrubs; during the winter, it’s decorated with lights and holds holiday events.