Want to keep your relationship strong? Don’t do the dishes – Metro US
Relationships

Want to keep your relationship strong? Don’t do the dishes A report from the Council on Contemporary Families (CCF) revealed that, of all the household chores women want their male counterparts to help out with, dishes take the cake. Good ol’ washing and drying. The research, slated for publication later this month, explained that women who washed dishes a majority of the time reported more relationship conflict and lower sexual satisfaction. (Code red.)

Doing chores that involve cleaning — which have been traditionally viewed as “women’s work” — are far from glamorous. Women resent taking these on alone because they “see themselves as relegated to the tasks that people don’t find desirable,” Dan Carlson, assistant professor of family and consumer studies at the University of Utah and lead study author, told The Atlantic.

Scrubbing dishes just happens to be the worst of these tasks.

“Doing dishes is gross,” Carlson said. “There is old, moldy food sitting in the sink. If you have kids, there is curdled milk in sippy cups that smells disgusting.” (Tell us something we don’t know.)

Carlson added that splitting household chores, especially dishwashing, benefits your relationship and pointed out that, unlike other chores, washing dishes can easily be turned into a shared activity. “My wife and I could take out the trash together, we could clean the toilet together, but that wouldn’t make much sense,” he stated.

“Or they can take turns,” co-author Sharon Sassler told MarieClaire.com, “meaning that one partner does not feel put upon every night. It seems to be mainly about not having to deal, all alone, with the huge stack of dishes in the sink.” 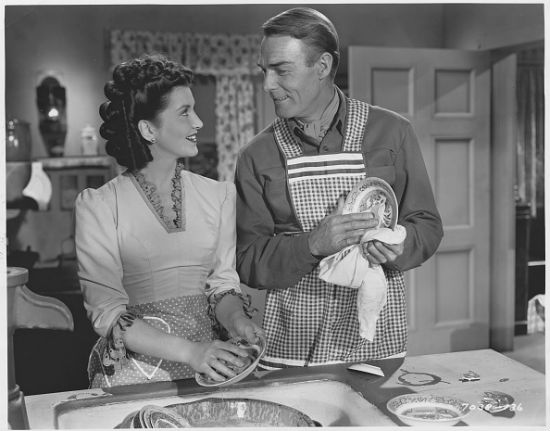 Carlson wrote in a release on the CCF site that men who did the majority of cleaning tasks reported lower satisfaction with their relationship and sex. But — and here’s the important part — “they were just as satisfied when these tasks were shared as when their partner did them.” So, basically, sharing these tasks would make women happier and keep men just as happy as when the cleaning is done for them. There’s no harm there.

Also, just a note: A study published in the Journal of Marriage and Family in August 2016 reported that couples who share household duties are having more sex. So dive right into that soapy, soggy-food-infested water together and do the dishes like grown adults. Your relationship will thank you.