What does the end of Velvet Buzzsaw mean? Writer and director Dan Gilroy talks us through it – Metro US
Movies

What does the end of Velvet Buzzsaw mean? Writer and director Dan Gilroy talks us through it

Warning: Obviously there are MAJOR SPOILERS ahead for Velvet Buzzsaw.

So if you’re yet to see Netflix’s satirical thriller, bookmark this article, spend the next two hours watching the hilarious and terrifying mayhem unfold, and then return to see what writer and director Dan Gilroy has to say about its conclusion.

Writer and director Dan Gilroy is the first to admit that there are numerous conclusions to Velvet Buzzsaw.

Meanwhile, Coco (Natalia Dyer) drives out of Los Angeles, only to see a homeless man selling Dease’s recently discovered paintings for just $5, and as the credits roll we see Piers (John Malkovich) drawing in the sand only for the waves to then wash over them.

What does the end of Velvet Buzzsaw mean?

“One of the prominent subplots in this ensemble cast is certainty John Malkovich’s character,” Gilroy tells Metro. “He’s a character who’s the largest artist in the world. But he was creating mostly as an alcoholic. Now he’s on the wagon and he can’t create. And he’s stuck. And he has a factory where he does reproductions and he can’t make more stuff.”

“In the credits sequence you see John Malkovich drawing on the beach with the waves washing away what he’s doing. But it doesn’t matter because he’s creating for himself. That’s really, that’s ultimately the message I’m trying to impart to as many people as possible if that’s relevant in their careers. If you create for yourself, I believe good things will follow.”

“Because everyone has a voice and this was key for me. I had to find my voice. Because I didn’t have a voice until Nightcrawler. If you can find your voice and explore what you think is relevant I just believe good things will come. Not all the time, but mostly.”

But why did Gilroy decide to use this sequence over the credits rather than as the final shots before they started to roll, though?

“Well you know, I definitely throw multiple endings on. You can definitely argue that one ending is when someone asks the street vendor, ‘How much is this worth?’ Earlier in the gallery it was $5 million and the street vendor is like, ‘I don’t know? $5?’ So the commentary is really, art is very subjective, and to apply a dollar amount is really ultimately meaningless. You can say that’s the ending.”

“There’s also Rhodora, Rene Russo’s character. Something that I live by is that dependency murders creativity. Creativity plays with the unknown. There’s no strategies that exist that contain the endless realm of the new. You create something just for yourself.”

“But I wanted the coda ending and tying up the subplot. It was in the script. I wrote it that way. He is this artist who took Rhodora’s advice and was now at the beach and drawing in the sand, just hundreds of yards of doodles that he is making and having them all washed away. He is just utterly liberated and free. I just loved that coda ending.”

But will the curse surrounding Dease’s work continue on to the people that bought it off the homeless person?

“You know I love it when people talk about a movie after they leave and that’s a question that I really hope people ask about and I’ve been wanting to say I wouldn’t want to put any validity to either side of that.”

Gilroy’s decision to end Velvet Buzzsaw in this manner actually has its origins in the collapse of Superman Lives,which was all set to star Nicolas Cage and be directed by Tim Burton, and was also written by Gilroy, before it collapsed in 1998.

“Superman Lives was the debacle of a lifetime. So bad that they made a documentary about it and in essence it was a $30 million write off. They pulled the film two weeks before shooting for many reasons. I was the writer at the time, and that was the culmination of everything I feared. I worked on it for a year and a half!”

“That day I drove down to the beach and I was sitting there and I was watching the waves come up and I thought, ‘Man I could have literally wrote the words in the sand and had the water just wash them away.’ I was really questioning for a moment. But I thought, ‘You know what? It doesn’t matter. From now on, if I’m only writing for myself, that’s okay.” 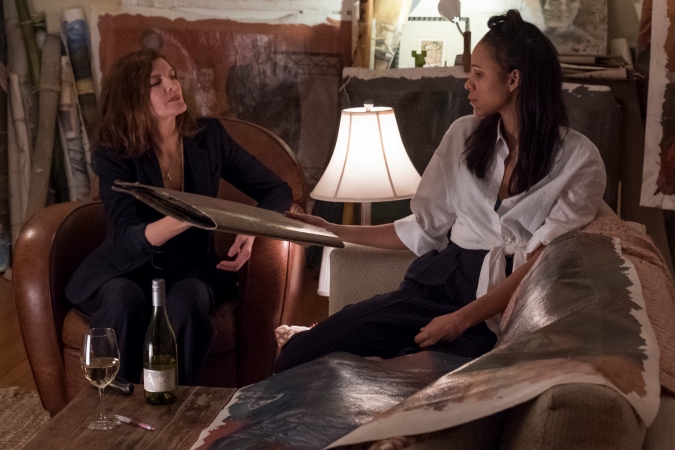 That moment sent Gilroy on a path that has seen him write and direct Nightcrawler, Roman J. Israel, Esq., and now Velvet Buzzsaw.

“It was very liberating for me. So that’s what evolved into Nightcrawler and Roman and Velvet Buzzsaw. I’m not saying I’m only going to work for myself. I’m aware that there’s an audience out there that I’m hopefully respecting. But I am really trying to carry that idea of; I want to challenge myself with everything I do. So that’s kind of the path I am on at the moment.”

Not that Gilroy immediately saw his decision to just focus on these personal projects as a positive.

“There was a time where if you had told me there was a silver lining I would have said you were crazy. But ultimately it was really a gift for me. It was a liberating gift. It was something I realized.”

“I used to tell myself that if I find this media relevant and important I will do this regardless of whether or not I get success out of it. I do this for myself. I do this for the people who enjoy it. It was utterly liberating and it was an utter gift of a cathartic moment.”