What it would be like to talk to Caesar, hero of 'War for the Planet of the Apes' - Metro US
Movies

What it would be like to talk to Caesar, hero of ‘War for the Planet of the Apes’

In 2011, the world met Caesar. He was a super-smart chimp and the hero of “Rise of the Planet of the Apes,” the reboot of the original film series that began in 1968. Caesar started out nice, even though he was being used for drug testing, which accidentally made him intelligent, capable of speech and complex thought. Still, there were some — notably James Franco’s scientist — who were kind to him. Most people weren’t, though, and when he was pushed too far, Caesar wound up leading his species in a revolution against their human oppressors.

By the third in the series, “War for the Planet of the Apes,” things have gotten even worse. Humanity has largely been wiped out by a supervirus; the survivors (including a Colonel played by Woody Harrelson) have decided to eradicate their simian neighbors, who will soon inherit the Earth. But Caesar won’t go down without a fight.

We sat down with Caesar to talk about human stupidity, climate change, Trump and what he does to relax.

Metro: Why do you want to kill all humans?
Caesar: I don’t. You guys attacked us first. We’re just trying to find a safe space away from you jerks. Some of y’all are alright, though. I like James Franco.

Metro: We wish his literary adaptations of difficult Faulkner and Cormac McCarthy novels were better.
Caesar: Me, too. But he’s pretty great in “The Interview.” He made me laugh when I went to see “Why Him?”

Metro: But back to genocide: Why do you think humans are so belligerent towards newly sentient apes?
Caesar: It’s just your nature. You’re an irrational species, mysteriously hell-bent on your own destruction. You’re short-sighted. Did you read that terrifying New York piece about climate change — how you’re almost certainly going to wipe yourselves out because you’re too stupid to accept scientific warnings? We apes will probably suffer alongside you, because you’re raising the earth’s temperature so high that by century’s end, if not sooner, the planet will be a microwave. After all, unlike you, we have fur. Good job, idiots.

Metro: Humans don’t come off very well in “War for the Planet of the Apes.”
Caesar: You don’t. The last movie had a few token decent ones, like Keri Russell. There aren’t any by this threequel. The only nice human is a little girl who can’t talk. She’s a victim of that supervirus that struck in “Rise.” It evolved and, instead of killing people, it turns their brains to mush, rendering them unable to form words or complex thoughts. Everyone who can talk is a stupid asshole.

Metro: What do you think of our own psycho leader?
Caesar: Are you serious? Even I’m more eloquent than him, and I’m a talking chimp. 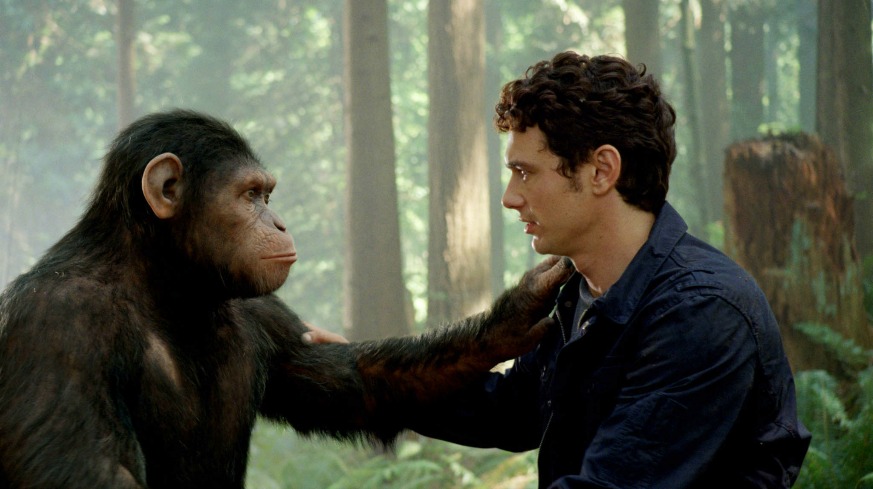 Metro: What can we do to ensure a real “Planet of the Apes”-type situation doesn’t come about?
Caesar: I mean, it’s probably too late. Not to harp on climate change, but one side effect of melting ice caps is that ancient diseases could spread back into the world, and you’d have no clue how to treat them. And of course, America pulled out of the Paris Agreement, all thanks to that reality TV show host you elected president — or not even elected, because he only won due to a technicality you should have fixed back when the same thing happened during the 2000 election. Boy, you guys are really dumb. But look, in the events of the previous “Apes” movie, “Dawn,” you saw how there could be peace between us and rational, sane humans. You need more Keri Russells. And more James Francos.

Metro: But we can’t spend all our time like Franco, making movies and paintings that no one but him wants to see. We need to find a way to speak to the masses, get our sane voices heard.
Caesar: True, but are you really going to find a way to talk to die hard Trump voters? That would be like humans talking to one of us chimps who know only sign language. You need to concentrate on the in-between people, the centrists, the ambivalent ones, the ones who aren’t too far gone. Once your type out-number the newly energized bigots who voted for the guy who said all Mexicans were rapists, there’s a better chance of averting catastrophe. But you probably won’t.

Metro: If we do doom ourselves to extinction, what would you save of our species’ legacy?
Caesar: The wheel was a good invention. The discovery of fire was smart. Dams and electricity. Swearing is fun. And I have this inexplicable love of Arby’s.

Metro: This has been a heavy conversation. What do you do to relax?
Caesar: I’d like to say I crack open a thick Russian novel and turn the pages till I pass out. But I can’t really read. I do bingewatch, though. Have you seen “Mozart in the Jungle”? The third season wasn’t as good as the second, but I dig it. I wish I could grow Gael Garcia Bernal’s hair. When humanity is no more, I’ll miss Gael Garcia Bernal’s hair on “Mozart in the Jungle” most of all.