Women in New York State no longer have to pay sales tax for that unwelcome visitor every 28 days. A sales and use tax exemption for feminine hygiene products sold in New York State took effect Thursday after Governor Andrew Cuomo signed the legislation this summer.

“Eliminating this regressive tax on women was a matter of fairness and I am proud to have signed this legislation to right that wrong,” Cuomo said after the signing. “With the law in effect, we have taken one more step toward a more just and more fair New York for all.”

However, that right is still being done wrong— at least in some stores.

Many women are posting their receipts online withthe hashtag #TweetTheReceipt after several stores still continued to collect the tax.The hashtag originally started for some as a way to celebrate the absence of sales tax, but tookon a different meaning as women started to realize they were still being charged 8.875 percent.

Metro purchased feminine hygiene products around 5:30 p.m. at two locations in the Financial District of Manhattan. Both retailers charged 8.875 percent sales and use tax. 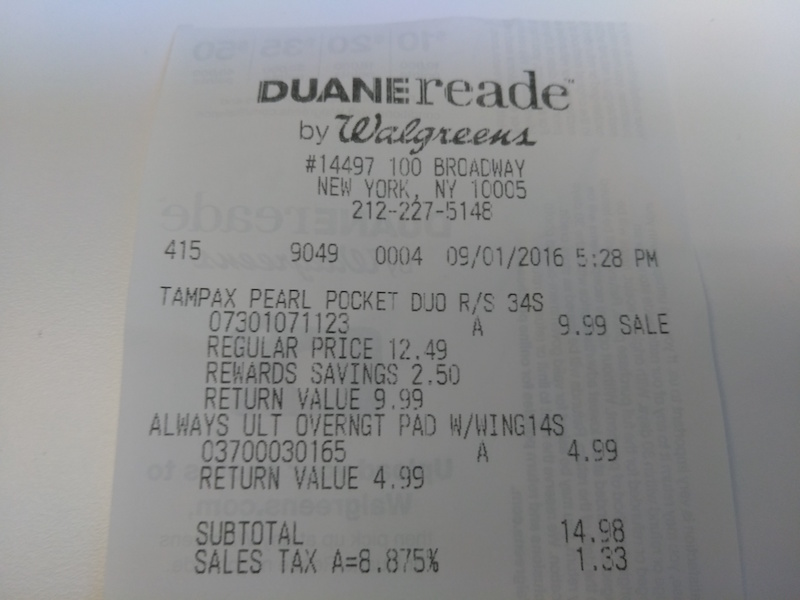 A spokesman for Duane Reade made the following comment:

“While updating our POS [point of sales] systems, in preparation for the sales tax exemption taking effect [Thursday], we experienced an error that prevented the exemption from going through. We’ve worked through and fixed any issue and apologize for any inconvenience this might have caused.”

The spokesman also said that any customers who were charged tax on feminine hygiene products can bring their receipts back to their local Duane Reade store for a refund.