When is Lent 2018, and what should you give up? – Metro US
Lifestyle Attention world: Lent is coming sooner than you think. Yes, really. When is Lent 2018? It actually starts next week and falls on a little holiday we like to enjoy with boxes of chocolates and champagne (or is that just me?). Here’s everything you need to know in preparation for Lent 2018.

In terms of the calendar, when is Lent 2018? Lent covers the 40-day period leading up to Easter and biblically symbolizes the 40 days and nights Jesus was tested in the wilderness after he was baptized (Matthew 4:2). It also, according to Catholic Online, symbolizes the 40 years Israelites wandered in the desert.

Lent is a time of fasting, but the degree of this fasting varies by tradition and sect. Catholics, for example, are encouraged to follow stricter practices. Protestants, on the other hand, tend not to follow “church-mandated practices when it comes to fasts,” reports Vox.

Catholics 14 and older aren’t supposed to eat meat on Fridays during Lent, according to USA TODAY who spoke to Father Michael Fuller, executive director of Secretariat of Doctrine and Canonical Affairs for the U.S. Conference of Catholic Bishops. Fish is allowed.

The Conference of Catholic Bishops website states that, “When fasting, a person is permitted to eat one full meal, as well as two smaller meals that together are not equal to a full meal.” (So…snacks, we guess.)

All #Fridays in #Lent are days of abstinence from meat. My fellow Catholics in case you forgot. #Lent2018 pic.twitter.com/XfubayWPwM

According to Vox, all Catholics — no matter how religious — are encouraged to fast from meat on Good Friday (March 30 this year), and The Conference of Catholic Bishops site also notes Ash Wednesday (Feb. 14 this year) as another day of fasting. 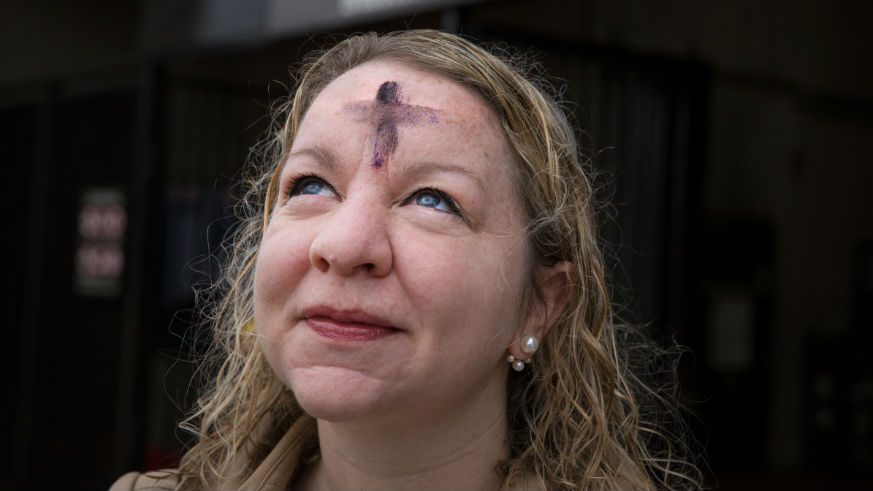 Really, Lent is 46 days long, but Christians observing Lent are told to break their fast on Sundays (and there are six Sundays during this period, hence 40 days).

Western Christianity typically allows people to pick what they wish to fast from — and this is why you hear talk of giving up one thing or another for Lent.

But why do people give things up for Lent?

Basically, to give up some comfort in our lives as Jesus did.

“In Lent, we can break down these walls that keep us tied down. By following Jesus into the desert, we can find that space to be vulnerable in between the joy of Christmas and of Easter,” one blogger wrote. “Both are linked by the vulnerability of the God who comes down from heaven to earth, who took human form and who bore wounds in his side to stand alongside us in our own pain and our own struggles.”

Some people also commit this time to community service and spiritual practices.

Here’s a nice informational video to sum it all up in preparation for Lent 2018:

You can’t spell Valentine without Lent.
There is no love without sacrifice.

You may or may not have given up anything for Lent before. Many people abstain from sweets, a bad habit, maybe even a bad relationship (hey, you’re doing it for Jesus after all).

You can try taking this online quiz to decide what to sacrifice in 2018, and here are some more ideas from Twitter — a few serious, some bizarre, most just plain funny.

Giving up Selfies for Lent.

Fast from the bad, embrace the good

Can I give up my student loans for Lent

Target (or just your favorite store)

I think for Lent I’m gonna give up going to Target because honestly that’s the thing I’m most addicted to. I’m completely obsessed with going there every day and looking up and down every aisle. ?

Im giving up alchohol and social media for lent this year. Im actually looking forward to it

Think I’m gonna give up rice for Lent again this year.

I’m giving up my New Years resolution for #Lent

I think I’m going to give up carbohydrates and refined sugars this year for Lent.

For some of us Catholics who want to give up chocolate for lent will be utterly disappointed that #AshWednesday falls on #ValentinesDay. pic.twitter.com/upwmWNPA3x

Could you drive less for #40days? Why not give up your car for #Lent!
This year we’re encouraging you to give up driving for 40 days between Wednesday 14 February and Saturday 31 March. #Easter https://t.co/R8WZ41nSSb pic.twitter.com/6hqAG20QXl

@Harry_Styles I am giving you up for lent. Bye. ?