Being absorbed by a new Wilco album is something that requires time. Over the past 24 years, the band, led by the cinematic vision of singer-songwriter Jeff Tweedy, has repeatedly built up the notion of what a modern rock band can be, only to burn that idea to the ground on their next release. While things have been a little stable sonically with the band’s solidified lineup of the past 14 years, their newest album, “Ode To Joy”, finds the band reaching for new heights in a new and exciting way that recalls their adventurous past.

“I think that Jeff had a real vision for what he wanted the accompaniment to sound like, and it was very light,” – Wilco’s John Stirratt on “Ode To Joy” 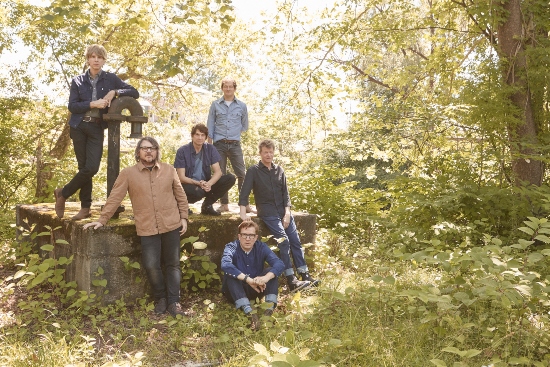 According to Wilco bassist and Tweedy’s longest lasting creative partner, John Stirratt, the recording process for “Ode to Joy” harkened back to the studio experimentation on records like “Yankee Hotel Foxtrot” and “Summerteeth.” Bare skeletons of Tweedy’s songs were laid down first in the studio with the assistance of drummer Glenn Kotche, then the rest of the band helped to flesh out the tracks. Their contributions result in some of the most exciting and surprising sonic explorations the band has committed to tape in quite some time, with an album that ranks amongst one of the best in the band’s nearly unimpeachable discography.

“I think that Jeff had a real vision for what he wanted the accompaniment to sound like, and it was very light,” laughs Stirratt of the stark and sparse arrangements on the album. “The arrangements were cool. The drum sounds were really cool and I think that they didn’t want a lot of dilution of that going on. But we found some really interesting ways to add to the existing tracks and really get a real continuity together for the record and at least it sort of represented, being a Wilco record, having everyone express themselves. It was a different process from almost every record and that’s generally what gets different results a lot at the time. So it was an interesting process.”

To give the album some context, it’s closest sonic counterpart would be the previous Wilco album, 2016’s “Schmilco”. But while the minimalist arrangements and interesting left turns on that album seemed to take on a more organic “band playing in the studio” sound, “Ode To Joy” seems like the work of a creative unit dead set on surprising themselves and taking their time to sculpt something both innovative and revitalizing.

“It has, it has definitely a tonal sort of similarities, but it’s definitely fleshed out,” says Stirratt on picking up where “Schmilco” left off. “It definitely feels a little more… It just has more dynamic sounds to me.”

Watch Wilco perform “Everyone Hides” from “Ode to Joy” on Colbert…

Stirratt has been Tweedy’s constant musical companion ever since coming aboard in the final days of his revered band, the Alt-country pioneers, Uncle Tupelo. In his long tenure, including 24 years of being in Wilco, Stirratt has had a unique perspective on the inner workings of one of America’s most cherished and prolific songwriters. While the band has been taking a break from recording since 2016, Tweedy has released two highly personal and acclaimed solo albums, last year’s “WARM” and this year’s “WARMER.” While some of those songs have been considered some of Tweedy’s best in some time, Stirratt understands that those records needed to be left out of the Wilco orbit.

“It felt like a separate thing to me,” says Stirratt. “Just knowing how prolific Jeff is, I didn’t have this feeling of like, ‘Wow, this should have been a Wilco song’. Whereas I have had that in the past, at certain times in the history of the band, that feeling. But I didn’t… The solo stuff has a different tone to it. It has an identity that I don’t really feel like I need to take that or I need to bring that into Wilco.”

With the release of “Ode To Joy,” the band is out on the road for their first world tour since 2017. With such a large discography that is picked apart and argued over by their fans. I ask Stirratt if having that pressure to mix things up between deep cuts and “hits” is ever daunting while building their setlists.

“That’s an interesting dilemma because we are in this position in the States, for example, we’ve played so many of these towns so many times that there isn’t this feeling that we have to do ‘Hummingbird’ every night. We’re just riding this fine line between what if we mix it up completely every night a la Phish, you know?” he explains. “The other voice is, ‘What about the first poor sucker coming to his or her first Wilco show?’ of which there are many. I remember we did a run in Chicago, one of this Winterlude where we played everything from the catalog. So it was five or six nights of completely different set lists. Didn’t repeat a song, and it made for a weird show (laughs). Some “AM” [Wilco’s first album] songs shouldn’t be played. So, it’s just not the best Wilco show. So we’ve always felt like riding the line between the sort of stalwart Wilco numbers and then there’s this 60% of Wilco tracks that we can all play, that are still kind of considered deep cuts. [Then there is] Europe, where we don’t get often and where we were playing bigger venues than we did in the last 10 years, that we can’t really go super deep there. People just don’t go to different countries, different territories, know different records. And so we try to keep a pretty broad overview in Europe but it really is, it’s a great question. It’s really at the core of what we want to be and especially in terms of the U.S. We’re still trying to figure it out. And I think just keeping it fresh to some extent and leaning on a few of the bigger songs almost on a nightly basis is the best we can do.”

Make sure to grab tickets to see Wilco on the road this Fall.

Listen to “Ode To Joy” by Wilco below…