The famously thin-skinned president has made a habit of blocking people who criticize him on the Internet, but Teigen has been throwing shade at Trump for years without consequence.

Teigen said she’s been hating on the president for nine years, but all it took to get blocked were five little words.

In response to a post, Trump wrote on Sunday saying, “It’s very sad that Republicans, even some that were carried over the line on my back, do very little to protect their President.”

Teigen’s response? “Lolllllll no one likes you.”

After 9 years of hating Donald J Trump, telling him “lol no one likes you” was the straw pic.twitter.com/MhZ6bXT1Dp

Here’s the full exchange between President Trump and the first lady of Sports Illustrated: 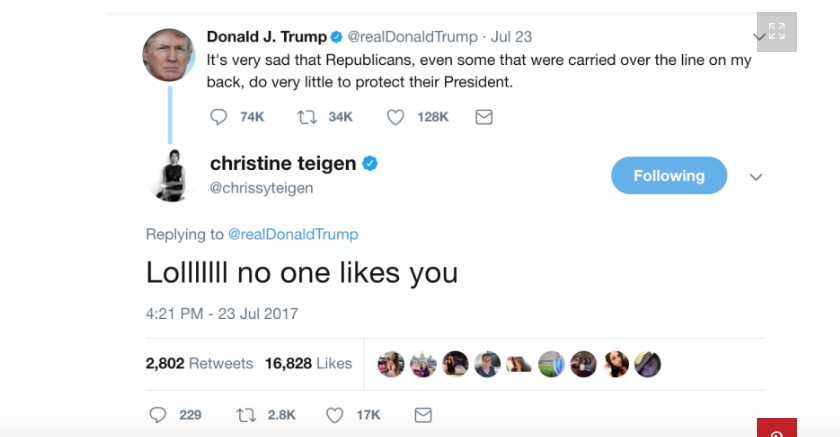 This is far from the first time Teigen has trolled Trump — she told the president to “grow up” on June 8 after he (once again) tweeted The New York Times was “fake news.”

Actually what she said was, “You are 71 f—ing years old,” the Sports Illustrated model and “Lip Sync Battle” host said. “Grow. The f—. Up.”

Apparently that didn’t get to the president quite as much as telling him “no one like” him.

Her fans were pretty pleased with the development.

One fan even offered to send Teigen a button he made featuring a screen shot of the Twitter page when @realDonaldTrump blocks you.

Welcome to the club! Lemme know if you want a button pic.twitter.com/ZFhZ23ZOPW

Teigen is hardly the first Trump critic to get blocked — even before taking the presidency, Trump frequently blocked people whose messages he didn’t like, including more than a few high profile critics.

The Commander in Chief can block @VoteVets, the voice of 500k military veterans and families, but we will NOT be silenced. pic.twitter.com/SaCN5hKU9R

Trump has blocked me from reading his tweets. I may have to kill myself.

But now that Trump is president, his habit of blocking critics has transformed from petty into a First Amendment nightmare.

First Amendment advocates have threatened to sue Trump over his continued blocking of people on Twitter, demanding all accounts be unblocked or “face legal action” over impeding the owners’ right to free speech.

One group, the Knight First Amendment Institute, argues Trump’s Twitter account is a “designated public forum” and as such should not be exclusionary.  It’s impossible to know just how many people and groups Trump has blocked.