Actress Zawe Ashton on living with ‘Betrayal’ on Broadway To act in a Harold Pinter play night after night is like a re-examination of your entire fabric. Renowned British actress and playwright Zawe Ashton knows this firsthand as she is currently starring in Pinter’s masterpiece, “Betrayal,” alongside Tom Hiddleston and Charlie Cox on Broadway at the Bernard B. Jacobs Theatre.

“I don’t know many other playwrights quite like him… It feels like you constantly have two rivers flowing in opposite directions inside of you. It’s like one is flowing upwards with all of the intense emotion that is underneath his words. There is a river that flows down which is about keeping a lid on all of that,” – Zawe Ashton on the works of Harold Pinter 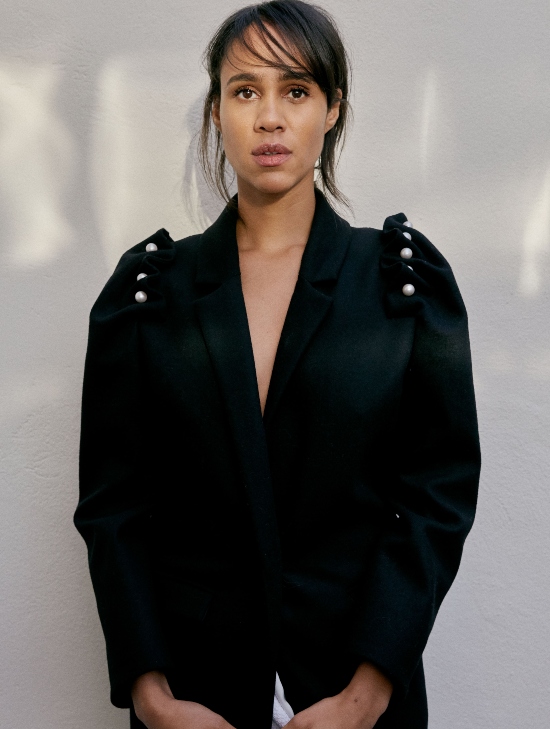 This new staging of the play, which had a hugely successful run in London’s West End, follows Zawe’s character, Emma, as she is trying to navigate keeping a long-lasting secret affair with her friend Jerry (Cox) from her husband Robert (Hiddleston). The three characters are the only points of focus for the show, and the innovative staging keeps all of the show’s actors onstage, even if they are not in the scene to keep the specter of shame looming in the air at all times. I asked Ashton if being so immersed in such a heavy and emotive work can be all-encompassing.

“I would say so, yes,” said Ashton with as laugh, as I caught her on a rare day off from being completely immersed in the play.

“Funnily enough, it’s the first day that I’m coming down with the ‘Betrayal Bug,’” she adds, “which is having done 110 shows in London and experiencing what it was like with the opening and the previews and getting into a space where you’re settling into the play in a very different way, you realize what a toll it takes on your nervous system. How Pinter’s words are very visceral to say and to experience. I don’t know many other playwrights quite like him in that sense. It feels like you constantly have two rivers flowing in opposite directions inside of you. It’s like one is flowing upwards with all of the intense emotion that is underneath his words. There is a river that flows down which is about keeping a lid on all of that. Which is what he is so famous for, this incredible repression and simmering to his language and certainly to the character he creates. Weirdly enough, that is ‘Betrayal’ and that’s certainly what my character is going through. So when you find yourself in one of Harold’s most personal works and find yourself in a situation where the characters that he has written and the style he writes in are completely fused, it’s a very, very potent mix. We’re just so grateful people are responding in the way that they are.”

The whole production came as a surprise, as both Ashton and Hiddleston staged a scene from the play as a part of director Jamie Lloyd’s Pinter at the Pinter festival. From there, the rest was history, as they say.

“The whole evening was hugely electric,” Ashton remembers of the night. “We just happened to hit on something that people responded to. People started to ask us if we were, in fact, in rehearsals for ‘Betrayal’ [laughs] … Suddenly, that evening started to turn into this incredible sort of stew of ideas and thinking about what it would be like to do ‘Betrayal’ and find the perfect jury and have it be a way to close the season. I say it was my idea, but everyone else that was involved that evening says it was their idea! It happened very organically and the fact that the three of us were in the same place at the same time is just unheard of. Charlie Cox had his show, ‘Daredevil,’ canceled just in time to get on a plane to London and do the play. It all came together in a very magical way, and that feeling of magic has followed through the whole process.”

Outside of “Betrayal,” Ashton is set to release her debut novel, “Character Breakdown” and to stage her own play, “For All Women Who Thought They Were Mad” at the Soho Repertory Theatre just across town this fall.

“I don’t know what kind of mischievous sprite is at work at the moment, in regard to all of the different plates that I am spinning,” says Ashton. “I think working on a piece by Harold Pinter who was as committed to acting as well as writing kind of gave me confidence. Because he would be in his own plays and absolutely keep up with the acting part of his creativity as well as the writing. I honestly have been in a very deep love affair with Harold. I think even more than the boys I’m with! I have just found so many aspects of his character and of his ethos have inspired me so hugely.”

For tickets to “Betrayal,” head to betrayalonbroadway.com.