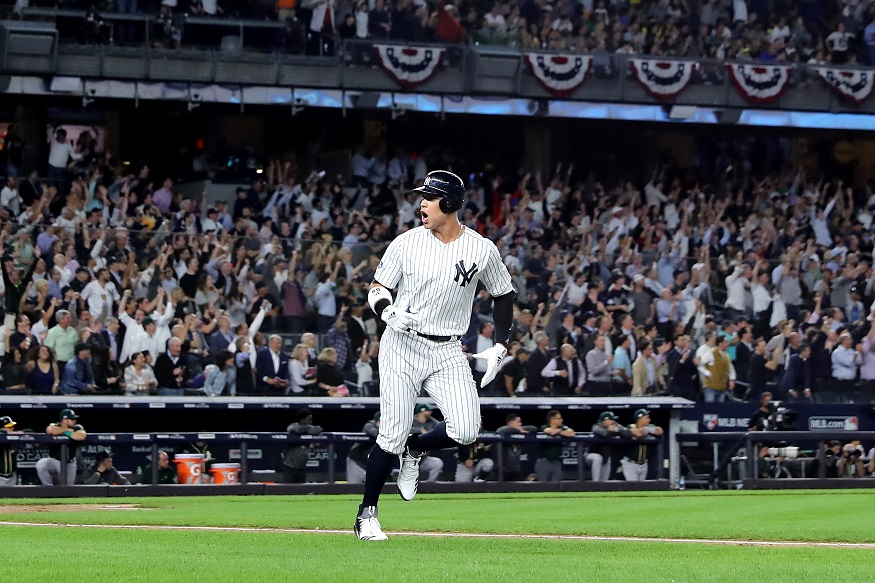 The New York Yankees are shipping up to Boston.

Stellar pitching from Luis Severino and an offensive surge from the new trio of bash brothers in Aaron Juge, Luke Voit and Giancarlo Stanton clinched the American League Wild Card Game for the New York Yankees in a 7-2 win over the Oakland Athletics.

The Yankees will meet the Boston Red Sox in the ALDS which begins on Friday.

New York took advantage of a timid-looking Athletics team, which opted to go with a bullpen game on Wednesday night. Reliever Liam Hendriks started things off, which looked to be a good choice considering the right-hander had a 1.96 ERA in nine openers since he was called up from triple-A on Sept. 1.

In reality, it was a disaster as the Yankees jumped on the Australian for two runs, which came off the bat of Judge when he took a 3-1 fastball an deposited it 427 feet away into the left-field bleachers in the bottom of the first.

Aaron Judge puts the #Yankees on the board first. #WildCard

On the other side, Severino redeemed himself from a horrific Wild Card start last year and a difficult second half to the 2018 season. He didn’t allow a single hit in four innings of work while striking out seven. However, four walks did make for some dicey moments, including a bases-loaded jam in the fourth inning that he was able to wiggle out of by striking out Marcus Semien swinging on a 100 mph fastball, his 81st pitch of the night. Judging by his reaction, it looked as though his night would be over after that big strikeout.

But Yankees manager Aaron Boone decided to trot out Severino for the fifth inning where he was immediately met with singles from Jonathan Lucroy and Nick Martini before being lifted for Dellin Betances.

With no outs, New York’s big right-handed reliever mowed down the heart of the Athletics batting order as he got flyouts from Matt Chapman and Jed Lowrie before striking out MLB home run leader Khris Davis.

The Yankees put things away in the sixth inning when they put up a four spot. Aaron Hicks doubled home Judge, who spun a chopper down the first base line for a double to lead off the inning off Fernando Rodney. After a wild pitch moved Hicks to third, A’s manager Bob Melvin called on his closer Blake Treinen, but things only got worse.

A walk to Giancarlo Stanton was followed by a two-run triple by Luke Voit, who continues to mash in a Yankees uniform after being acquired from the St. Louis Cardinals.

He would score on a Didi Gregorius sacrifice fly.

After a spotless inning from David Robertson, Zach Britton provided the only blemish of the night for the Yankees when he allowed a two-run home run to Davis in the eighth.

Stanton though would immediately answer with a moonshot of a solo home run that just wrapped around the left-field foul pole to wrap things up. It’s the second-straight year the Yankees have reigned supreme in the Wild Card Game.

A victory last year over the Minnesota Twins sparked a run to the ALCS where the Yankees came within one win of the pennant before bowing out to the Houston Astros.

This year though, New York’s AL East division rival Red Sox awaits in the ALDS beginning Friday. Boston is coming off a franchise-record 108-win season and holds a slim 10-9 season series advantage over the Yankees.

But you know what they say: It’s a brand new season in the playoffs.