Best kid-friendly shows on Broadway and beyond for families The holiday season is upon us — yes, Halloween counts. The ones probably having the most fun is kids, between dressing up like ghouls, gathering for Thanksgiving and helping to decorate trees.

Since with holidays come breaks in school, you’re going to have some time to fill. Take them to one of these family-friendly shows and get that love of live theater instilled early.

“Fans of #SpongeBob are going to love it because it’s true to the characters, but it’s also a totally original story.” – @ethansaslater #SpongeBobBway

Can a musical about an animated talking sponge and his undersea friends possibly make it on Broadway? Tina Landau’s (Steppenwolf) adaptation of the global hit SpongeBob Squarepants cartoon certainly managed to impress critics during an initial run in Chicago last year, including raves for its lead actor, Ethan Slater, who’ll be reprising his role on Broadway. The wide-ranging soundtrack features a roster of well-known artists like Steven Tyler and Joe Perry of Aerosmith, David Bowie, R&B singer John Legend, Panic! At the Disco and many more, and like the show, The SpongeBob Musical has plenty of winks for adults. And what’s a more relevant message right now than coming together to save the world? Performances begin Nov. 6, spongebobbroadway.com

Let the rehearsals begin! See you on Broadway in November at Circle in the Square Theatre. #OnceOnThisIsland

Once on This Island

A favorite among theater kids, Once on This Island is sacred theatrical material. It’s just as closely held by its creators, who had to be convinced that young Broadway actor/director Michael Arden had the right vision before agreeing to the revival of their smash hit musical. He won them over, and this one-act musical about breaking down barriers in a community, the importance of traditions and more themes that especially resonate now, is back on the main stage. A stripped-down acoustic soundtrack and unconventional casting make sure this won’t be just another revival. Performances begin Nov. 9, onceonthisisland.com

Disney’s Aladdin made his first wish on Broadway back in 2014, and the musical has continued to win fans with its high-energy onstage magic and timeless tale of love conquering all. This summer, a new face arrived to take on the lead role: Broadway veteran Telly Leung, who previously starred in the first-ever acapella musical In Transit, so you know he’s got the vocal chops to make that magic carpet fly. aladdinthemusical.com

The stage adaptation of the human baby who grew up as an elf in Santa’s Workshop on the North Pole returns to Madison Square Garden for the holiday season. When Buddy finally realizes he’s not quite the right size or, well, anything to be an elf, he sets out to find his real father to see if he’d be any better at being a human. It’s a good existential reminder that family, whether by birth or the found kind, can get you through anything, and that believing in our dreams is the real magic inside all of us. Dec. 13-29, theateratmsg.com/elf 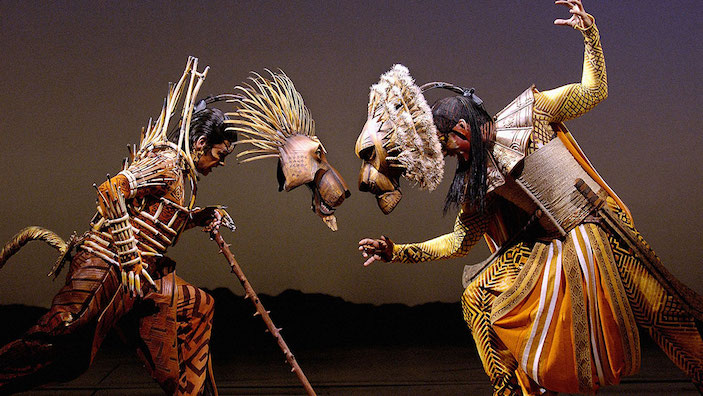 The cats of Cats aren’t the hardest-working felines on Broadway — that would be The Lion King’s pride of lions (as well as mischievous hyenas, 18-foot-tall giraffes and many more) celebrating their 20th anniversary on Broadway this month. The spectacle of lifelike puppetry and human agility means the Circle of Life won’t be broken soon, but why wait to experience a story you all love in a whole new way? lionking.com