Bobcat Goldthwait has been on a personal mission to not just march to the beat of his own drum, but to bash his drumsticks directly through its skin. He rose to worldwide acclaim with his outrageous and unpredictable stand up most notably punctuated by his warped vocal affectation. It’s a persona he has successfully shed as he stepped away from the bright lights and the brick wall backdrop of the comedy club to get behind the camera in order to write and direct his own films.

In each of his projects, Goldthwait has tackled characters with complicated stories that take aim at the fabric of our society. Such films like 2012’s God Bless America that set to dismantle the cult of celebrity in a radical way. Last year’s documentary on his late great standup comedy mentor Barry Crimmins Call Me Lucky delved into the humanity behind one of the industry’s great beating hearts and exposed the vulnerability beneath the armor of our heroes. There is no constant through-line with his films, per say. Yet they are all created with Goldthwait’s slightly cracked view of the world. This is exactly what makes his new truTV satirical anthology series Misfits & Monsters so compelling. 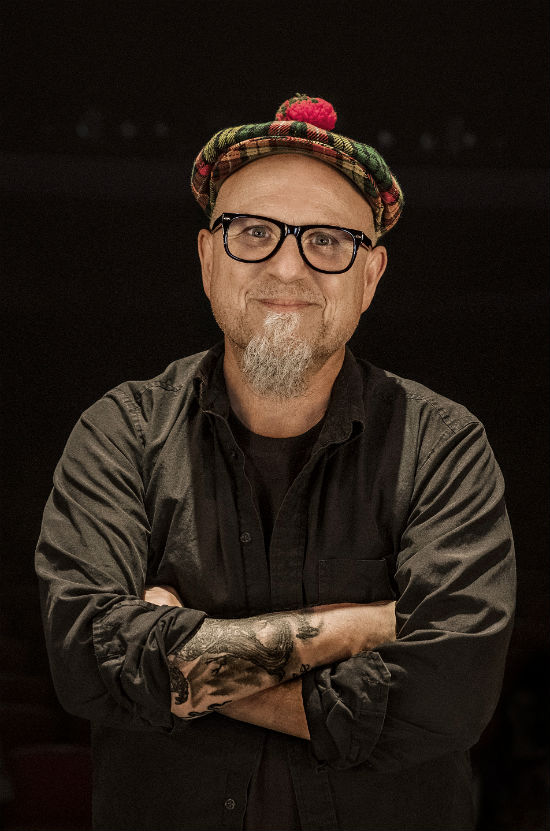 Think of it like a funny version of the Twilight Zone. Goldthwait wrote and directed all eight episodes of the new show, but had the idea for this project long before Black Mirror began predicting the ever-looming technological end times.

“I wanted to do this show about seven years ago and I went out and pitched it and people weren’t doing anthology shows at the time,” says Goldthwait. “I do believe that the success of ‘Black Mirror’ certainly helped me get this show on the air. But I think the show is different in it’s own way. It’s kind of like saying ‘anthology show’ and then saying ‘procedural crime drama’ and there’s like a million different ones with a million different tones. It doesn’t bother me. In fact, I’m flattered when Twilight Zone and Black Mirror are brought up as comparisons… I have a lot of stories in my head and I have a lot of different genres I like to tackle. Every time I would make a movie I would do a completely different kind of genre each time out. I think that’s why doing a TV show made sense.”

The show jumps from genre to genre — from mockumentary and slapstick to period pieces and straight up horror. For Goldthwait, he believes that this approach is simply a matter of following his own creative valve and knack for pulling different emotions out of his viewers.

“I like the challenge in almost everything I do to see if I can have characters that usually do something that is very hard to get past,” explains Goldthwait. “For example — In God Bless America Joel Murray’s character shoots a baby. Even though it’s a fantasy, can you still empathize with this person? I’m not trying to manipulate the audience into liking characters, especially in this series, but I’m trying to see if you can empathize with the challenge of telling their stories. With how far out these stories go, I want to see if there is still something that seemed identifiable.”

One of the episodes follows a presidential candidate, played by David Koechner, that has to come clean to the voting public about his double life as a werewolf. Like the current political climate today, the voters chose to look past this flaw to vote a monster in to office. Sound familiar? Fortunately, Goldthwait was able to show this episode to his hero Crimmins before he succumbed to cancer last February. A strong political voice and social justice advocate, Crimmins could be a tough critic. So, Goldthwait was nervous to show him the finished product of Misfits & Monsters.

“He kind of got quiet during it,” remembers Goldthwait of Crimmins watching the episode. “I was like ‘Oh no. He didn’t like it.’ But at the very end, he goes ‘that was really smart.’”