When we spoke to actress Connie Nielsen about “Wonder Woman” two weeks ago, the comic book movie was still, almost mysteriously free of controversy. Men’s Right’s Activists hadn’t attacked it. There were no calls for boycotts. It looked (and still looks) like it wouldn’t meet the same fate that met “Ghostbusters” last summer.

Then late last week, the Alamo Drafthouse movie theater chain announced all-women screenings of DC’s latest entry. And the stupid men came right out of the woodwork. They complained about how there weren’t all-men screenings, how it was reverse sexism. To their credit, Alamo has responded brilliantly, shaming the haters and turning public support in favor of this superhero era’s first big female-driven comic book movie.

In “Wonder Woman,” Nielsen plays Hippolyta, queen of an alternate dimension of Amazon warrior women and mother of our hero, Gal Gadot’s Diana. The 51-year-old Danish actress (“Gladiator,” “One Hour Photo”) talks to us about how we should judge it as a great movie, not just a great movie starring a woman, and about Hollywood’s weird obsession with making white, straight men the heroes.

So far Men’s Rights Activists have been pretty quiet about “Wonder Woman.”
I mean, we’ll see. You’ll see some of that misogyny coming out eventually. But so far, so good.

They can’t be completely silent. They probably didn’t all have sudden about-faces and discover what shame is.
I have a feeling that these people don’t know the meaning of the word “shame.” I don’t think these people feel shame or question those kinds of feelings. That’s the point. Theirs is a reaction of fear. Their emotional makeup is just underdeveloped.

This isn’t a movie that makes a big deal out of a female hero kicking ass. She just kicks ass and is confused that some people are surprised by that.
We’re not trying to prove anything. We don’t need to. I wish we could just make it about being a great superhero movie, you know? Because it is a great superhero movie. There’s so much good in this film.

It has a lot of positive messages, which you don’t always see from Hollywood.
That’s so true. My youngest is 10, and I’m still wondering if some of those producers and directors and writers are completely oblivious to how weird it is that they’re always putting the white, male, heterosexual guy as the automatic leader. There are five people, two of which are girls and another two who are of different races. And of course they choose the white, heterosexual male as the leader of the gang. Is no one here conscious of how un-timely that kind of vision is? 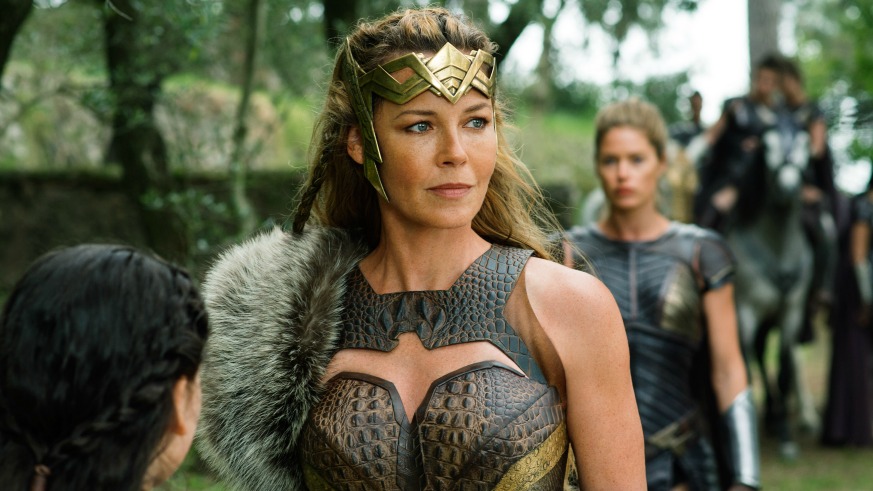 The white, heterosexual male is usually our guide into this magical world of diversity. The posters are a bunch of people of different races and genders, with the white guy at the center.
And they just don’t know that that’s not real diversity. That’s just paying lip service to what is essentially still a white, male society. If it’s just lip service or whatever’s currently in the zeitgeist, doesn’t that just mean that we’re still embracing conformity? It should always be about the true values of a future world community.

Sometimes I worry all we’ll do is talk about this, and nothing will get better. We’ll always backslide into regressive crappiness.
You know, when I was growing up, it felt like everything had changed. I was told that we were kind of done, that we didn’t have to fight anymore. Everyone had figured it out. If it’s not inclusive or it’s not fair, then that’s not how it should be. Then there was this crazy backlash against feminism and even against anti-racism in the late ’80s and throughout the ’90s, where people just crept back into conformity. And it stayed like that until just two or three years ago, when people started talking about it again, not being afraid to speak out about it.

There’s a great scene in “Wonder Woman” where Gal Gadot is in a room full of male generals, and she loudly tells them off. They don’t know what hit them.
I think that’s my favorite part of the movie. They’re looking like they’re about to eat their mustaches when they see a woman in the room. I love the way Gal plays that scene; she doesn’t even understand what their issue is. It doesn’t occur to her that she’s not supposed to be there.

That’s a feeling all women have experienced time and time again: a majority of men who don’t want to listen to a strong woman.
I saw research that says the magic number when diversity is no longer an issue on a company board is 30 percent. When there’s 30 percent of women or 30 percent of different races, then all of a sudden it becomes a tenable discussion to attack or modify the prevalent asymmetry. It’s good to know. It only takes 30 percent to make change. That’s not too hard to get to.