Gruff Rhys of Super Furry Animals on the transcendent sounds of ‘Pang!’ - Metro US
New York

Gruff Rhys of Super Furry Animals on the transcendent sounds of ‘Pang!’ Gruff Rhys doesn’t like your expectations. In fact, he sees them as the right lane to a fork in the road he would never like to go down. As the lead singer and songwriter in the highly influential Welsh indie-rock band Super Furry Animals Rhys and his group of enthusiastic pop deconstructionists sought a more wide-open space that was left in the wake of the rigidness created by grunge and the dominating alternative radio-rock of the early to mid-’90s.

The band incorporated elements of ’60s pop, punk, psychedelia and electronic experimentation into their unique stew to great acclaim the world over. And with his solo career, Rhys has yet to be satisfied with going about business as usual.

“I tend to react to the previous record,” – Gruff Rhys 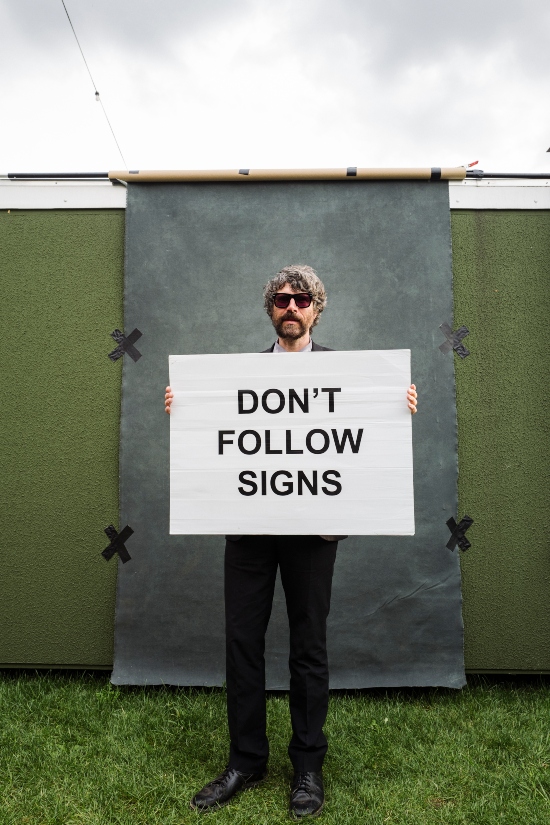 “I tend to react to the previous record,” Rhys tells me as we discuss his brand-new album, “Pang!”, that will be released on Sept. 13 through Rough Trade Records. His last album, “Babelsburg,” was backed by a 72-piece orchestra to deliver 10 songs that recalled the grand sculpted pop stylings of Lee Hazelwood and Glen Campbell at his most grandiose. “The last record was pretty straight-up live, fixed with a band and orchestration. So, I really felt like doing something more explosive this time.”

The new record finds Rhys committing completely to the sounds of Tropicalia, bossa nova, and Afrofunk with a little mix of his electronic experimentation. Rhys started working on the record after collaborating with Blur and Gorillaz mastermind Damon Albarn on his Africa Express “MOLO” EP. While working on those sessions, Rhys’ eyes opened to the possibility of creating an album incorporating these sounds. He had also struck up a friendship with the South African electronic producer Muzi who, in the producer’s chair, would help him obtain the lush nylon string guitar-led sound he envisioned in his mind.

“I’ve been listening to a lot of Brazilian artists for quite some time,” Rhys explains, regarding the inspiration behind the new album’s direction. “And the Spanish guitars … acoustic guitar has become my main instrument.  I guess this is a really stripped-down album, based around the kind of Brazilian-style guitar playing. I spent some time in Brazil between 10 and 15 years ago. I recorded quite a lot in Brazil, I ended up buying lots of Brazilian songbooks that had a lot of Brazilian chords. It changed the way I played guitar, I think. Those chords are still with me. A lot of the songs on ‘Pang!’ have been written using the chords of bossa nova.”

Another stylistic change to the record is that this time out, Rhys had chosen to sing the whole record in his first language, Welsh, rather than English. That choice makes this record feel like a lost Welsh psychedelic Tropicalia record that vinyl cratediggers would covet and pay top dollar for on sites like Discogs.

Apparently, Rhys needed some coaxing to go in this direction from his new creative partner. “The album started its life with the second track on the album, ‘Bae Bae Bae,’ and I sent that to Muzi, and he’d learned the Welsh language a bit. I asked him if he’d be interested in recording a whole album and he said he would be if it was all in Welsh, which was not necessarily what I was expecting. I had a bunch of Welsh-language songs. It’s my first language, and I was more than happy to comply.”

While Rhys is typically not the kind of artist who is known for looking back to his past, I ask him if there is any chance we will hear new material from the band that started it all, Super Furry Animals. As an answer, Rhys assures that the band will be uncovering and reissuing material from their third album on Creation Records, “Guerrilla”.

“We are working on the reissue of ‘Guerrilla’, which is twenty years old this year,” he says, “So, we’ve been spending a lot of time on that recently, digging out some old tapes. So, we’ve been working together on that. So, there should be some news on that pretty soon.”

Make sure to catch Gruff Rhys this Thursday, September 5 when he plays the rooftop of the Bushwick venue Elsewhere.

Check out the new song “Pang!” by Gruff Rhys below…