Summer Cannibals get even with ‘Can’t Tell Me No’ Portland indie-rock band Summer Cannibals have found a new motivating force within their band: revenge. Their new release, “Can’t Tell Me No,” bristles with white-hot energy, taking aim against the evils tearing down any hopes of a harmonious society. In layman’s terms: It’s just a kick-ass guitar-rock record in a world that desperately needs more of them. Unfortunately, the band’s leader and guitarist, Jessica Boudreaux, and her longtime drummer Devon Shirley, had to go through hell between now and the release of their 2016 album “Full of It” for this new record to see the light of day.

“It was like, f—k it, let’s do this. To me, I hear it in the record personally. There’s a sense of purpose,” – Jessica Boudreaux of Summer Cannibals 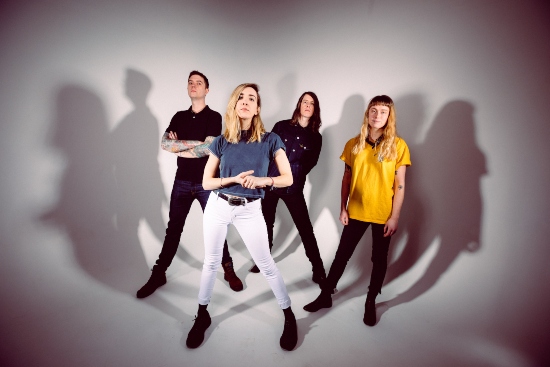 “I feel like after ‘Full of It,’ I went into an identity crisis regarding the band,” Boudreaux tells me over the phone, as the band begins to pile into their van ahead of their upcoming tour. “I wasn’t sure what I wanted to do with it. The lineup at that point wasn’t totally working. We stopped touring after that and I took some time off and I made a pop record. We just tried other things for a little bit. After a year and a half or something, we decided to go ahead and record another record. After we recorded that, Jenny, who was our bass player, left the band and we got Ethan Butman, who is now playing bass. Cassi Blum also joined the band, who is the guitar player. It was kind of like everything clicked into place.”

But while things were starting to really get going for the band, a series of unfortunate setbacks occurred in the recording of what would become “Can’t Tell Me No” — more specifically, in the form of a toxic relationship with a high-profile person in the indie-rock community who was assisting with making the record.

“It all started to feel excited and fun again,” Boudreaux remembers. “We started to play shows and we were in the process of shopping this record that we had made and some s—t went down with someone who was involved in making it [who shall go unnamed at the request of Boudreaux]. We were forced into a situation where we had to trash the record just as we were about to sign a record contract [with Tiny Engines records], of course.”

Needless to say, the emotions tied to the finished record became extremely complicated. How would they proceed with such an ugly stain on what they had just created? So rather than release it, the band decided to scrap the record and re-record it on their own terms. Once the people at Top Shelf heard the new version of the record, they were more thrilled with it this time around.

“It’s one of those situations where it sucked, but I 100 percent believe it was for the best,” says Boudreaux on the decision to re-record the album, “because who wants to be out working your ass off to promote a record that is benefiting someone who should not be benefiting from it.”

The record is dripping with defiance with songs like the title track, coming off as rallying cries against toxic masculinity with impassioned vocals and powerful guitar interplay between both Boudreaux and Blum. The band is currently on the road and will be making a stop this Saturday at Elsewhere in Bushwick with support from Field Mouse, who will be releasing their new album, “Meaning,” this Friday.

At this moment, Boudreaux could not be happier with the way things have turned out for the band. The lineup is as strong as ever and they have created an album together that they can truly be proud of, free of subtext.

“It’s awesome that we get to tour this much in support of something that all four of us made together. It definitely helps with morale! Everyone feels invested equally,” she says. As for the determination behind recording the new album to spite those who tried to stand in their way? She feels triumphant.

“It was definitely not sad,” she says. “It was like, f—k it, let’s do this. To me, I hear it in the record personally. There’s a sense of purpose.”