Kaya Scodelario: ‘I don’t know a single woman who is boring’ – Metro US
Celebrities

Kaya Scodelario: ‘I don’t know a single woman who is boring’ Kaya Scodelario doesn’t do boring female characters. Instead, the women she’s played are strong, fascinating and flawed. The 25-year-old English actress made her name on the TV show “Skins” and then as Catherine Earnshaw in Andrea Arnold’s gritty take on “Wuthering Heights.” She then graduated to “The Maze Runner” YA series, and now “Pirates of the Caribbean: Dead Men Tell No Tales.” In the latter, Scodelario plays Carina, a fierce young women mistaken for a witch because of her love of science and astronomy. She winds up joining Johnny Depp’s Captain Jack Sparrow on his latest adventure: trying not to get killed by an old nemesis (Javier Bardem) hellbent on revenge.

We talked to Scodelario about why women are superheroes, how big movies can be boring to make and why she adores “The Terminator”’s Sarah Connor.

A big “Pirates” movie is pretty much the opposite of “Wuthering Heights,” the movie that put you on the map.
“Wuthering Heights” was super gritty, very raw. We had a tiny budget. Most days we didn’t even have a script. We just worked it out on the spot, felt whatever we wanted to feel in the moment. And Andrea [Arnold, the director] gave me amazing advice for being a woman in film: “If you’re on your period and you’re pissed off, great — your character’s on her period and pissed off. There’s nothing wrong with that.” That’s a mantra I’ve held close to me. You’d never get that kind of information from a guy.

Still, your character in “Pirates” isn’t a damsel in distress. She’s almost as angry as Catherine from “Wuthering Heights.” She’s an interesting, complex character.
That’s something I always look for in all my roles. I don’t know a single woman who is boring. We’re not simple, we are hard to pin down, you can’t define us by one thing. It’s important to represent that on film, especially with something this huge. I wanted to make sure we understood that Carina is layered. She’s a survivor, she’s independent, she’s got her own personal mission, she thinks the pirates are a bunch of idiots, and they probably are. 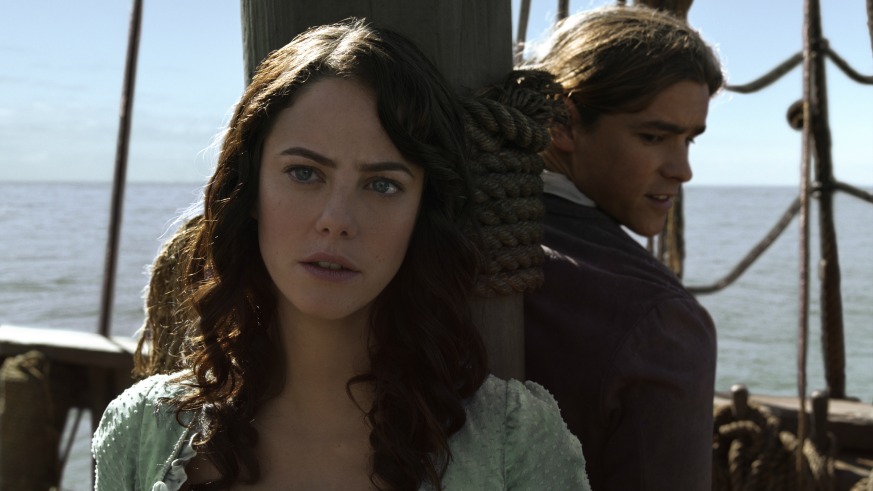 Were there female heroes in big movies you looked up to when you were younger?
I watched the “Terminator” movies when I was really young. I was obsessed with them. I always loved Sarah Connor. In “Terminator 2” — which is probably the best sequel to anything ever — she’s fighting for what she believes is right. There’s a huge moment where she has to make a decision to kill the guy she knows will ultimately cause Skynet to go live — I’m such a nerd about “Terminator,” sorry [laughs] — and she has to make a moral decision. I loved how strong she was, I loved that she kicked ass, that she was muscle-y. Then she’s also a mother. She’s the kind of character I always look to for inspiration when I’m doing these action movies.

It’s neat that both this film and “Wonder Woman” have scenes where the female lead complains about having to do action stuff in gigantic period dresses that are wholly impractical for running and fighting. How was doing that?
It’s insanely hard. I thought a corset would be cool to get dressed up in, but actually it sucks. I had a running bet with the camera crew that I’d make them all wear corsets, so they’d know what I’d been through for six months. And none of them did it. They all wimped out at the last second. We do have this great moment when Carina has to swim for her life. So she takes off her dress, because it’s going to get in the way. We make jokes about it, but she’s actually being incredibly practical. I always find it ridiculous when a girl goes through a long action set piece, and she’s got lip gloss on at the end. Because I can’t keep my lip gloss on for more than an hour.

Having come up doing TV shows like “Skins” and smaller films, where you’re constantly busy, what was it like winding up on a blockbuster set, which can be, frankly, boring.
It’s definitely not as much fun as people think. I usually bring my friends with me on set, and especially with this movie, they were like, “Can we come visit?” I said, “Well, you can, but you’re going to hate me after the third hour. You’re going to be so bored.” It’s alright in the end, when you see the finished product. But when you’re on the same blue screen stage for three weeks straight, shooting one sequence, and then the scene lasts two minutes on the screen, there’s a bit of me that goes, ‘Oh, I wish people knew how much time went into that.’