Macy's Christmas Windows: When they open, what to expect and how to get a good view - Metro US
New York

Macy’s Christmas Windows: When they open, what to expect and how to get a good view

On Thursday, November 16, get ready to be wowed by Macy’s Christmas windows at Herald Square.

Each year, Macy’s kicks off the holiday season by unveiling its iconic and magical Christmas window display for everyone to enjoy. During peak hours, the Herald Square location can have more than 10,000 people pass the windows.

The theme this year is “The Perfect Gift Brings People Together” and each window will focus on the joy of sharing holiday festivities with friends and family. The Macy’s flagship store will have different variations of holiday traditions on full display in six windows, with each window featuring a “cast of enchanting characters sharing the spirit of the season in New York City,” according to Macy’s.

Macy’s National Director of Window Presentation Roya Sullivan says each window will use interactive technology to enhance the visual experience. The goal is to capture the energy of New York City during the holiday season and according to Sullivan, this year’s Macy’s Christmas Windows will have something everyone can enjoy.

“As we created these windows, we were thinking about the magic of holiday giving and the importance of being with those we love throughout the Christmas season,” Sullivan said in a press release.

“We have guests from all over the world travel to New York see our windows, some who are visiting for the first time and some who return every year,” she added. “We wanted to capture that bustling energy and magic of New York City during the holidays, filled with special moments with family and friends.”

According to Macy’s, a team of more than 200 artists, graphic artists, sculptors, animators, carpenters, electricians and sound technicians contribute hours of their time to put together the show.

Although the Christmas season officially starts the day after Thanksgiving with Black Friday deals, the unveiling of Macy’s Christmas Windows is enough to get everyone in the holiday spirit.

The first Macy’s Christmas Windows display began in the early 1870s. Early window displays featured porcelain dolls from around the world. In 1899 R.H. Macy began the tradition of animating the window displays at the department store’s original 14th street location. 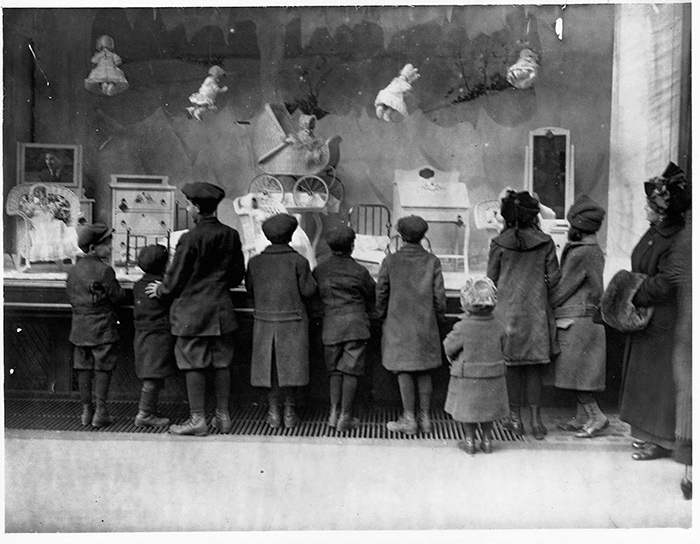 By the 1900s the Macy’s Christmas window displays were considered an annual holiday tradition for everyone to enjoy.

When does the Macy’s Christmas windows show begin?

Macy’s will unveil their holiday windows on Thursday, November 16 at 5:30 P.M. EST. at the Herald Square location on 34th Street (151 W. 34th St.) The Macy’s Christmas windows will remain on display until January 1.

What will the Macy’s Christmas windows display this year?

The theme this year is “The Perfect Gift Brings People Together” and all six windows will feature something different but will all tie into the theme. Each window will feature a variety of scenes ranging from warm and traditional Christmas displays to a bustling city display complete with skating penguins to a window made into an elaborate dollhouse.

The best way to see the unveiling of Macy’s Christmas windows is to arrive early. The event officially starts at 5:30 P.M. EST, so it’s probably best to get there at least an hour early if you want to see the festivities. Fortunately, the windows will be on display from November 16 to January 1, so if you’re not into large crowds on the first day, You have time to swing by Macy’s anytime until then to see all the holiday magic.